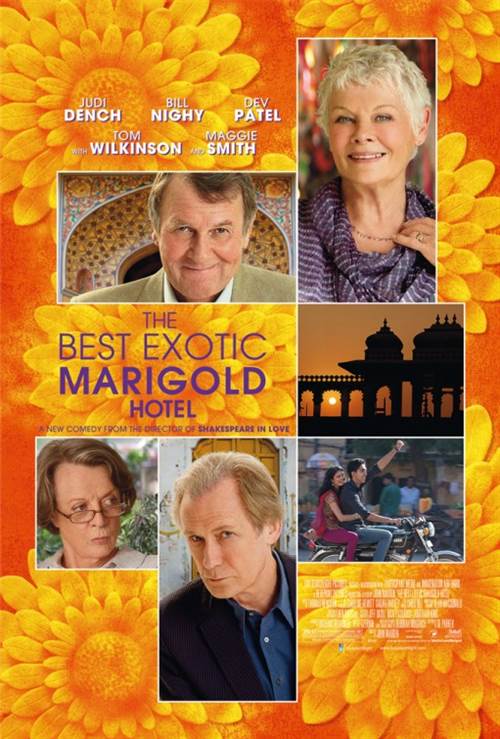 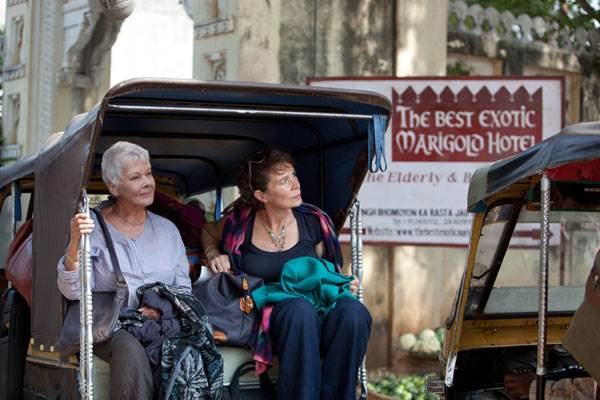 A group of British retirees (Judi Dench, Maggie Smith, Bill Nighy) decide to "outsource" their retirement to exotic -- and less expensive -- India. Lured by advertisements for the newly restored Marigold Hotel, and imagining a life of leisure in lush surroundings, they arrive to find that the Marigold is actually a shell of its former self. Though their new home is not quite what they had imagined, the retirees find that life and love can begin again when they let go of their pasts.

Stream The Best Exotic Marigold Hotel in Digital HD/4K from the AppleTV store. 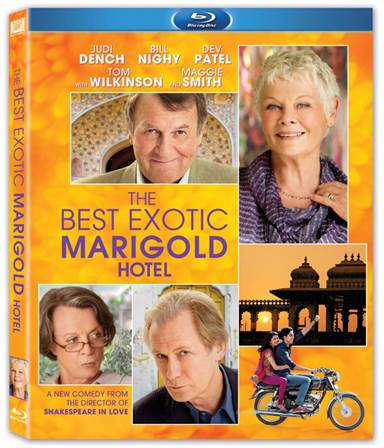 In today's economy, it's tough for seniors to survive, let alone thrive with what little funds they receive from their retirement. Well Sonny Kapoor (Dev Patel from Slumdog Millionaire) has just the solution, to outsource retirees' to his visionary Best Exotic Marigold Hotel for the Elderly and Beautiful".

In Fox Searchlight's newest release to Blu-ray, we find seven retirees, strapped for cash, heading to India, hoping for the experience of a lifetime.

Little do they know, once they arrive at the luxurious hotel that they marveled at on the Internet, they would find their lodgings are in dire need of a major overhaul. Sonny is the first to admit that the photos they saw were more a "vision of the future". It's more of a work in progress, a labor of love, Sonny's dream is to take his fathers dilapidated property, and create his own destiny, even if his own mother disapproves and feels as if he's wasting his time.

Director John Madden, best known for directing "Shakespeare In Love", puts together a stellar cast of British acting royalty. Academy Award winning actress Judi Dench plays Evelyn, a recently widowed woman looking to find a life of her own, after decades of marriage where her husband called all the shots. Academy Award winning actress Maggie Smith steals the show with her performance of Muriel, who's incredibly set in her ways, and is basically forced to go to India for a much needed hip replacement. Tom Wilkinson, from "Michael Clayton" fame, plays Graham, a newly retired judge, who heads to India in hopes of finding peace from the haunted past he can't escape from. Bill Nighy, from "Pirates of the Caribbean" plays Douglas Ainslie, an optimist at heart who's being crushed by his ever pessimistic wife Jean, played by Penelope Wilton, better known for her work on current hit "Downtown Abby". Lastly there is the two looking for love in all the wrong places, Norman, played by Ronald Pickup, and Madge, played by Celia Imrie.

Marigold's scenery is just stunning. As Evelyn says in the film "Can there be anywhere else in the world that is such an assault on the senses? From the sounds to the cinematography, Director John Madden gives you a little taste of what India is really like. "Marigold" is filled with witty humor, and when times get tough, Sonny is there to remind us that "Everything will be all right in the end... if it's not all right then it's not the end."

The Blu-ray extras included in this disc are really just a few small segments that really don't expand much on the story or show what it was like for the crew to film in India. I was hoping for more stories from the seven lead actors/actresses, since it was stated that this was their first time in India. I guess hoping for a blooper reel from Dench and Smith was asking for too much?

In the end, "The Best Exotic Marigold Hotel" is the reason why we love movies with real storylines. Its simplicity in concept, and yet quite complicated characters, enchants, inspires and makes you wish that when your time comes, that you'll be that adventurous!

I give it 5 hotel keys out of 5, Grab a key and check-in for an amazing story!