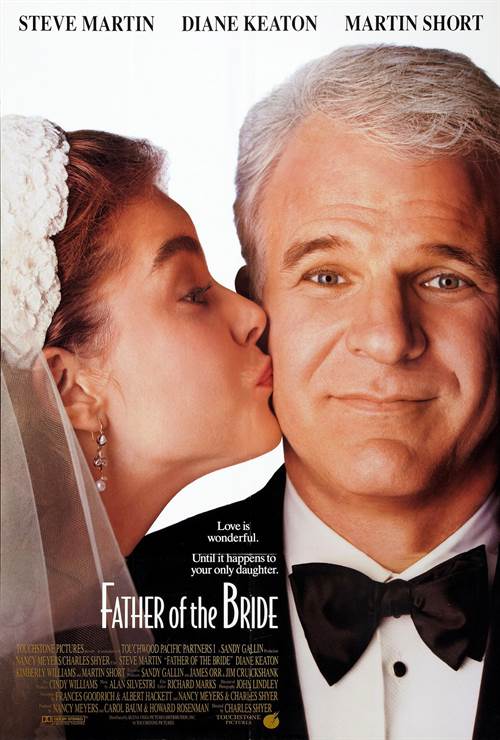 Father of the Bride Synopsis

Steve Martin delivers a winning performance as George Banks, the befuddled father who has a hard time letting go of his young daughter (Kimberly Williams) when she unexpectedly announces her plans to wed. The "I do's" and don'ts of her big day prove no small feat for George as he runs into an off-the-wall wedding planner (funnyman Martin Short), his patient, level-headed wife (Diane Keaton), and hysterical hitches.

Purchase DVD/Blu-ray/4K UHD physical copy of Father of the Bride today at Amazon.com

Stream Father of the Bride in Digital HD/4K from the AppleTV store.

Father of the Bride images are © Touchstone Pictures. All Rights Reserved. 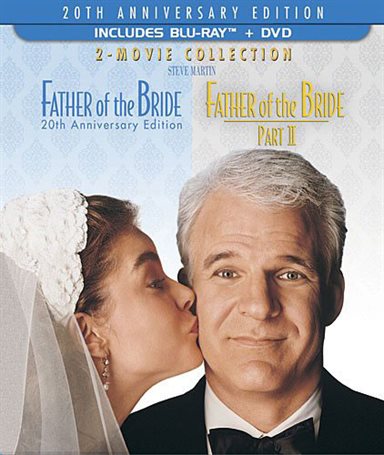 "Father of the Bride" is the 1991 comedy about a father who has to come to terms with the idea of his daughter getting married and finally leaving home. Though the story calls for Martin to address the audience a few too many times and there are some schmaltzy moments (we get it—he still thinks of her as his little girl), Martin easily passes for an overprotective father who's unwilling to let his daughter go. He's been dreading the day that his little angel will leave him and find another man. But that's only one set of emotions. Throughout the film, Martin is able to convey a complex mindset that includes conflicting feelings at every turn, mixed with nostalgic flashbacks and projections into the future—all of which are complicated once his wife, Nina (Diane Keaton), and daughter, Annie (Kimberly Williams-Paisley), hire a wedding planner with an impenetrable accent that only the two of them seem to be able to understand.

It's Martin's reaction shots that are the most precious and comic—whether it's a barely controlled rage at seeing his prospective son-in-law put his hand on his daughter's knee, the thinly disguised glee upon learning that one of the people they had to invite had died, or the eye-rolling of a man who thinks the groom's parents (Peter Michael Goetz, Kate McGregor-Stewart) are too touchy-feely filthy rich. This is Martin's movie, and he creates such a warm and likable George Banks that you're pulling for him to pull himself together—even though you know he'll do so, because not to would turn this into a drama. The characters in the film cut him some slack, too, even though at one point he snoops through the potential in-laws' stuff and ends up making an ass of himself. It's never clear whether he's this way normally, or if the engagement and the wedding reception they're hosting at the house has put too much of a strain on him.

It all starts with Annie coming home from a study-abroad experience in Italy. At dinner, the audience notices a rock she's wearing on her ring finger, but the parents don't. They need to be told that she met a guy named Bryan MacKenzie (George Newbern) in Italy and that the two of them hit it off so well she's engaged.

George tells this 22 year old that she is not getting married, and from that initial bad reaction it's one misstep after the other—with Keaton calmly telling him what he needs to do, for everyone's benefit.

Keaton plays off of him so well that it's easy to imagine them as a couple, and Williams-Paisley and Newbern are appropriately giddy and wide-eyed. And little brother Matty somehow manages to avoid being swept aside or hamming it up too much that he takes the focus off of George and his reactions. Really, there are no big surprises in "Father of the Bride." Even in the scenes featuring flamboyant wedding planner Franck ( played superbly by Martin Short) and his assistant (BD Wong), it's still all about George. We know where "Father of the Bride" is headed from the very beginning, but the fun is in watching George make the journey.

"Father of the Bride, Part II" came out in 1995, and as sequels go it's not bad . . . but it's still not on the same level as the first movie, even with all the principles returning. This time, Martin Short has a little competition for funnyman, because Eugene Levy does a riotous impression of a controlling Middle-Eastern husband.

But the narrative structure is the same. Once again life throws George Banks a curve, and he spends 106 film minutes learning to be truly accepting and comfortable with it. This time it's the announcement that Annie and Bryan are going to have a baby. Because the plot is introduced in exactly the same way as in the first film, it becomes quickly apparent that there will be no surprises this time, either. Well, except in the first act, when, shortly after Annie and Bryan's announcement, George learns that his wife is also pregnant.

"Father of the Bride, Part II" feels like the screenwriters took out a hammer and banged this square plot so it would fit into the first film's round hole of a structure. How can we get Franck and his assistant back again and give them more camera time? Well, you have the Bankses hire them to create the perfect room for the new baby, and you get Franck—who's already brimming with a little too much estrogen—to do his best Richard Simmons impersonation and lead the two pregnant women in exercises.

The double baby whammy sends George into a mid-life crisis, and the rest of the film charts his progress and recovery, with all of the other characters ostensibly there (as they were in the first film) for George to react to. The trouble is, the structure is SO similar that it feels a little tired this time around. "Father of the Bride, Part II" is still entertaining as a lightweight comedy, but it doesn't have the same appeal as the original. Put them together in one package, though, and it's pretty irresistible.

Apart from several scenes in the first film that display a rougher level of grain, the video quality is good but not fantastic.

There are no new Blu-ray bonus features. For extras, you have to pop in the DVDs, which don't have much more to offer. Included is the 15th Anniversary Special Edition of "Father of the Bride," which comes with a 10-minute "invitation" (promo-style behind-the-scenes feature), "Martin & Short Interview Each Other" (5 min.), and an audio commentary with co-writer and director Charles Shyer. Shrug.

As for "Part II," there's a 4-minute behind-the-scenes feature in which Short interviews Martin that again is a pre-release promo, and another 4-minute pre-release promo with voiceover in which Nancy Meyers and Charles Shyer appear on-camera.

"Father of the Bride" should bring a smile to anyone who's been in a family that's had a wedding—regardless of your point of view.