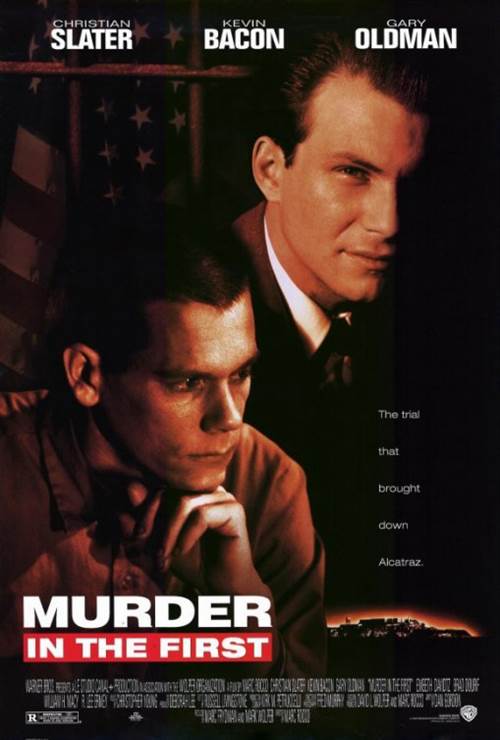 A convict is on trial for murdering a fellow inmate and the young, inexperienced lawyer assigned to him bases his defense on the inhumane treatment at Alcatraz was responsible.

Purchase DVD/Blu-ray/4K UHD physical copy of Murder In The First today at Amazon.com

Download Murder In The First in Digital HD/4K from the iTunes store.

Murder In The First images are © Warner Bros.. All Rights Reserved.

Murder In The First Blu-ray Review 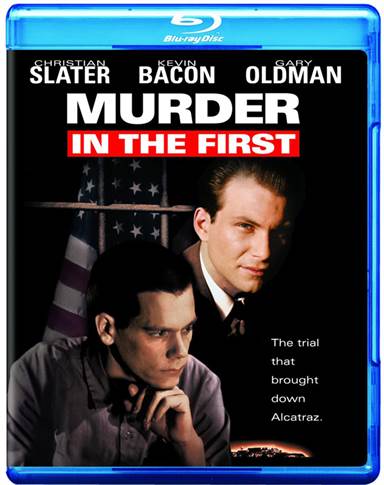 "Based on a true story," those are loaded words. By that standard the undeniably affecting Murder in the First, which takes major factual liberties, is bound to get bashed. Here's the true part: Henri Young — Kevin Bacon in a blistering performance — hit prison at 17 for stealing five bucks from a post office. In 1938, Henri was thrown into the dungeons of Alcatraz, where he spent more than three years naked and cringing in a dark, cold, solitary 6-foot-by-9-foot cell until the warden returned him to the main prison. Then, in a crowded mess hall, the dazed and addled Henri killed the man he believed had wronged him. Henri's trial for first-degree murder exposed the sadistic practices and helped close Alcatraz forever.

These incidents are all set forth in the film, vigorously directed by Marc Rocco. The tale is not sweetened in the telling — watching Henri writhe in agony in his cell is meant to make you squirm — but some of the facts are. Henri was defended by several lawyers. In the film there is only James Stamphill, an inexperienced public defender willing to take on the system. Christian Slater plays him with fierce intelligence. The trouble is, James doesn't exist. He's a composite character.

The composite character has a girlfriend, attorney Mary McClassin, who is played by Embeth Davidtz. Mary is not a composite character; she has been totally invented to goose up our rooting interest in young James. Then there is Warden Milton Glenn, a button-down sadist who cuddles his family at home and crushes inmates at work. Though Gary Oldman plays him with chilling subtlety, you have seen this monster — he's another composite character — in every prison picture since sound came in.

Should the filmmakers be nailed for going Hollywood? Yes and no. What studio is going to risk millions on a big, brown, dreary movie about a moldy case? Add romance and uplift and you get your movie made. Say this for Rocco: He exposes a real injustice. It is impossible to watch Murder in the First without being moved. Bacon dropped 25 pounds and wore disfiguring makeup to capture Henri's scarred look, but his achievement in the role comes in letting us see the emotional scars left by Henri's ordeal. For a movie like this, with such a compelling story at its core, you forgive the compromises — the story of Henri Young needed to be told.

The film looks very polished thanks to the wonder of Blu-ray. Unfortunately there are no bonus features to speak of, which is a shame because this film could certainly use them.