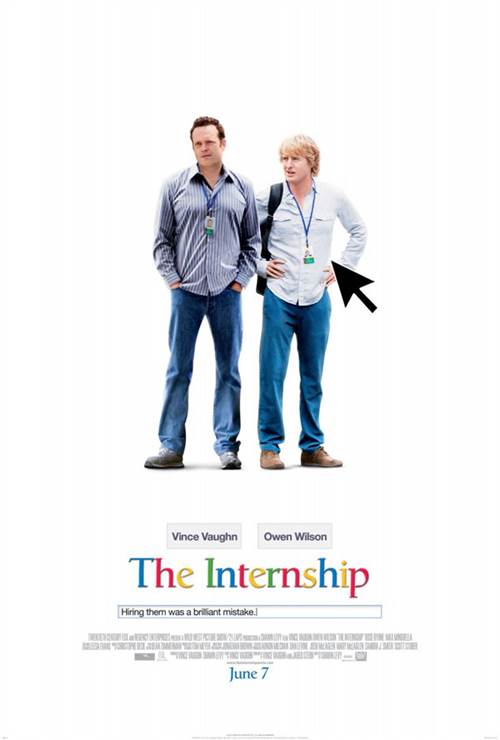 Vince Vaughn and Owen Wilson team up to crash the digital world in this laugh-out-loud buddy comedy that clicks—now even more outrageous in the UNRATED version you couldn’t see in theaters! When old-school salesmen Billy (Vaughn) and Nick (Wilson) attempt to reboot their obsolete careers by joining Google’s prestigious internship program, the competition is as intense as it is hilarious!

Stream The Internship in Digital HD/4K from the AppleTV store.

The Internship images are © 20th Century Fox. All Rights Reserved. 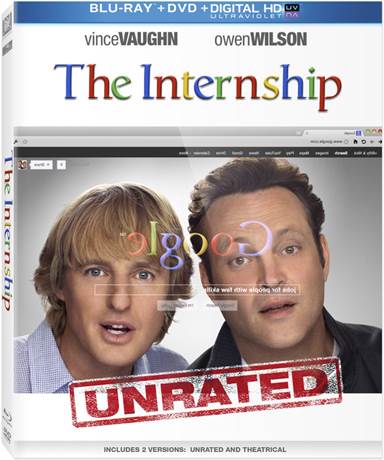 One almost has to giggle at the irony inherent in The Internship with regard to Google's well publicized ability to tailor ads for specific people via its technologies like AdSense. This too long and not funny enough supposed comedy deals with two misfit guys, maybe not exactly "middle aged" (as euphemistic as that term is, typically) but getting close to it anyway, who are fired from their sales jobs and through a series of too long and not funny enough machinations end up as interns at Google. What results might be something that could be termed Google AdSense in a completely different way than it's typically used, for The Internship is one of the most blatant examples of so-called "product placement" in recent memory, where in this case the "product" is Google itself. Shawn Levy, the film's director, states in the commentary included on this Blu-ray as a supplementary feature that he made his agreement to do the film contingent on being able to actually utilize real Google corporate locations, which he stated was a "double edged sword". The film both lionizes and lampoons the corporate mentality and culture at this Big Brother-esque facility, where college aged kids congregate every summer as interns to partake in various challenges where one team is supposedly offered jobs as a reward. Google actually was my friend in researching how much of this premise actually has any basis in reality, and the answer is a perhaps surprising, "quite a bit". While teams of interns don't actually "duel it out" as is portrayed in the film, much of the rest of The Internship has at least a tangential relationship to actual bona fide "Googliness". Levy also mentions in the commentary how it was Vince Vaughn who pitched an idea that was a so-called "clean concept", where he and buddy Owen Wilson would become interns at Google. Unfortunately, not much "dirt" was added to that clean concept when Vaughn and Jared Stern went on to write the actual screenplay. This is a high concept in search of an actual film, and perhaps more importantly, a comedy in search of any hearty laughs.

Vaughn and Wilson proved what admirable on screen chemistry they had in Wedding Crashers, and that same camaraderie is front and center in The Internship, though it's at the service of a surprisingly dour and even depressive film. Vaughn's character Billy McMahon is a fast talking salesman who is all flash and big dreams. Wilson's Nick Campbell on the other hand is the more reserved one in the partnership, a kind of cheerleader for Billy's more in your face antics. We meet the two as they drive through Atlanta on their way to a meeting with a prospective client, listening to an improbably "psych up mix tape" featuring Alanis Morissette of all people.

They arrive at the meeting extremely well prepared and go through their sales paces (which turns out to be for a high tech watch), only to be told by their client that their company has gone out of business. When they return to the "corporate" fold, they're summarily dismissed by their smarmy boss (John Goodman in a not very funny but at least mercifully brief cameo). Nick resigns himself to taking a job with his sister's husband (Will Ferrell) at a mattress store, but Billy starts—well, Googling for jobs for people with no skills. Somehow that gives him the bright idea to go for an internship at Google, and he manages to pry Nick away from what is obviously a soul crushing job. The two engage in an unlikely and pretty frenetic online interview and against all odds are selected to join the internship program.

The rest of The Internship is almost unbelievably rote, despite its somewhat unusual location. Billy and Nick find themselves surrounded by tech savvy young 'uns, and they are assigned to a team that is a walking, talking compendium of various stereotypes. There's Lyle (Josh Brener), the seeming hipster who's actually afraid of his own shadow, and Yo-Yo (Tobit Raphael), an Asian-American kid who is perhaps rightfully afraid of his "Dragon Parents", and Neha (Tiya Sircar), an Indian American whose mild mannered exterior (literally) masks a wilder side that loves "cos play". Anyone who's ever seen a movie, let alone looked at one of those Screenwriting 101 books, will be able to predict what happens next: the "old timers" are initially rejected by their young counterparts, but slowly prove their mettle through their accumulated life experience. Along the way, they help the younger interns to assimilate valuable life lessons, blah, blah, blah. And of course just for good measure there's an uptight nemesis (Max Minghella) and corporate love interest (Rose Byrne) for Nick. It's about as formulaic as they come, with nary a spark of interest or comedic energy along the way. When even Daily Show regular Aasif Mandvi is reduced to self-parody as an uptight Indian American mentor, that's some indication of how creatively bankrupt The Internship is at virtually every turn.

The really odd, even confounding, thing about The Internship is how quasi-lobotomized it all seems, especially when compared to the raucously bawdy, even vulgar, Wedding Crashers. There's also a very palpable melancholy running through this film, something that seems at least a little questionable given Owen Wilson's well publicized personal problems. To hear his character wax philosophical about whether it's even worth it to carry on strikes me as being a bit callous or cavalier. The film's overly sanguine attempt to paste over every minor obstacle and give virtually every character a candy coated happy ending seems particularly gratuitous, given much of the morose goings on throughout the first section of this surprisingly ineffective outing.

The Internship is presented on Blu-ray courtesy of 20th Century Fox Home Entertainment with an AVC encoded 1080p transfer in 2.35:1. Colors are beautifully saturated here, especially the bright primaries that abound once the guys get to Google. Fine detail is excellent in both close-ups and even midrange shots, capturing a lot of the kind of goofy retro-modern textures inside the Google facilities. The film's sun dappled Californian locations are caught with a sleek, glistening look that is consistently sharp and precise. The Internship's lossless DTS-HD Master Audio 5.1 track sounds just fine, but it never really has consistent opportunities to strut its sonic stuff. While some scenes, like the guys' entrance into the crowded foyer full of Google interns, or a later scene where the team goes to a club, do offer some nice surround activity, a lot of this film plays out in smaller scale dialogue moments where only occasional ambient environmental noise creates any sense of immersion. That said, fidelity is uniformly excellent, including in the reproduction of several source cues.

High concept only takes The Internship so far, and unfortunately that's not far enough. This film is so resolutely stuck in a rut it almost defies description. Vaughn and Wilson make an extremely appealing star duo, and many of the supporting cast turn in nicely colorful performances, but the screenplay is just a mass of clichés without a gut busting punchline anywhere to be found. Maybe Vaughn and co-writer Jared Stern should have interned with a gifted comedian before having undertaken this disappointing project. For fans of the film, the good news this Blu-ray offers great looking video and nice sounding audio.