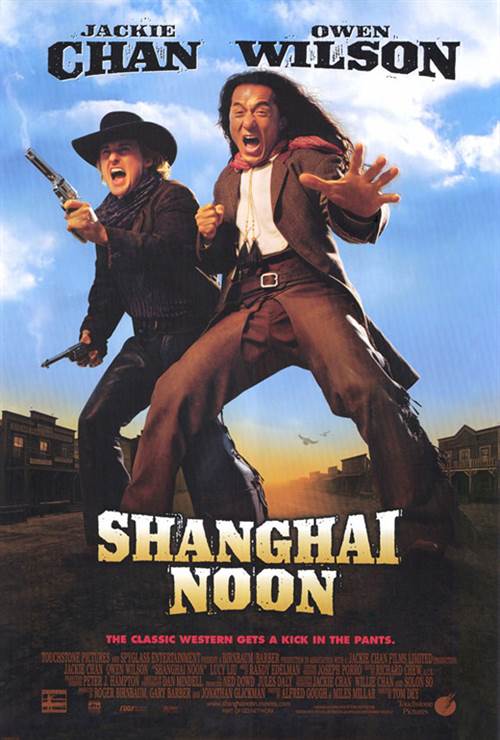 The classic western gets a kick in the pants when Jackie Chan travels to the Wild West to rescue a kidnapped princess. After teaming up with a train robber, the unlikely duo take on a Chinese traitor and his corrupt boss.

Stream Shanghai Noon in Digital HD/4K from the AppleTV store. 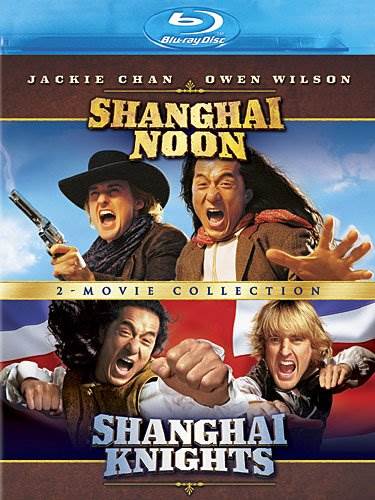 Rush Hour has frequently been referred to as Jackie Chan's English-language breakthrough, and, at least from a box-office standpoint, there's truth to that claim. However, much of what makes a Chan performance special was missing from that film, as the Hong Kong actor spent much of the time in the shadow of the flamboyant Chris Tucker. Shanghai Noon, on the other hand, gives Chan a meatier and more varied role. The level of martial arts is toned down while the comedy is amplified, and Owen Wilson proves to be an effective sidekick, complementing the star while never stealing the spotlight from him. This isn't great Chan, but of all his American endeavors, it has the most to offer.

The film occurs during the 1880s, with the first few scenes taking place  deep within China's Forbidden City. When Princess Pei Pei (Lucy Liu) is kidnapped and taken to America's Wild West, the Emperor sends four members of the Imperial guard after her, including Chong Wang (Chan). Once in Nevada, Chong saves an Indian boy, earning him a wife (Brandon Merrill) and the name of "Man-Who-Fights-In-Dress." He also becomes entangled with Roy O'Bannon, an outlaw, and, after ending up in the same jail cell after a bar brawl, the two make an uneasy pact to aid each other. However, while Chong's goal is to rescue the princess, Roy is thinking of the gold that the Emperor is supposed to pay as her ransom. But he's not the only one after the money. A greedy law man, Van Cleef (Xander Berkeley), and Pei Pei's captor, Lo Fong (Roger Yuan), are equally eager for the Eastern treasure.

Those expecting the martial arts derring-do of a Romeo Must Die will be disappointed. Director Tom Dey, positioned Shanghai Noon as a kinder, gentler film. Chan has several opportunities to perform his ballet of carefully choreographed moves, but the fight scenes are shaded towards comedy, not testosterone-based action. This is perhaps the tamest movie Chan ever did, most of the outtakes shown during the closing credits are of him flubbing lines, not being hurt in physical miscues. Of course, with Chan aging, it's unrealistic to expect him to continue doing a variety of death-defying stunts. Middle age catches up to everyone, even martial arts stars.

But, if Chan's hands and feet aren't as nimble as ever, his wit certainly is. In one of the fight scenes, he cleverly makes use of the local flora (trees and bushes) to dispatch the bad guys. In another, he employs a rope and a horseshoe. The lighter flavor to the hand-to-hand combat sequences adds a hint of spice that is sadly missing from too many generic American action endeavors. The easygoing Wilson makes an effective foil for Chan, helping to enhance the "fish out of water" comic scenario concentrated around Chong Wang (whose name is mispronounced as "John Wayne"). Lucy Liu, as the supposed love interest, has little screen time and no chemistry with Chang when she is around. Plus, there's always the problem of what to do with his nameless-but-devoted Indian Wife.

The only time Shanghai Noon falls apart is if you begin to think about the plot, which really doesn't make much sense. Ultimately, it's designed as a throwaway means of getting likeable heroes and detestable villains on the screen and throwing them together for a final showdown. Shanghai Noon is intended to be enjoyed for its jokes and its low-key action, but nothing more. For Chan, it was another notch added to his new American belt, but given the films he made during his run here, this one did little to elevate his "Q" rating.

Naturally there was going to be a sequel, at the time of Shanghai Noon, Chan was at the peak of his American popularity and far be it for Hollywood not to cash in on that. And as with most sequels "Shanghai Knights" (2003) is not quite up to the level of its predecessor.

None of Chan's action comedies have much plot to speak of, and neither does "Shanghai Knights"; at least not a plot of any significance. Like most of his films, this one has a story line that mainly tries to get Chan and his partner into as many action situations as possible in the least amount of time. On this occasion, however, the script tries too hard in its desperate attempts for ideas, giving it a degree of sameness compared to Chan's other movies.

The time setting is 1887, and Chan, playing his Western character Chon Wang (say it fast and it sounds like "John Wayne"), is the sheriff of Carson City, Nevada. But not for long because his father, the Keeper of the Royal Seal in the Forbidden City, China, is murdered and the Seal stolen, prompting Wang to take off in pursuit of the baddies. The evildoers are Lord Nelson Rathbone (Aidan Gillen) and Wu Chan (Donnie Yen), very bad evildoers, indeed, so evil they intend to team up and take over the thrones of their respective countries. Rathbone wants to be King of England and Wu Chan Emperor of China, and they're not about to let any rightful heirs get in their way. Somehow, the Royal Seal is a way to consolidate their power. Wang's sister, Chon Lin (Fann Wong), calls upon her brother to help her track down the miscreants, where she has followed them as far as she could to London. On the way to London, Wang picks up his old saddle buddy, Roy O'Bannon (Wilson), in New York City to help out, and it's off to London they go.

Once in London the movie becomes a free-for-all. They no sooner arrive than they are in a battle royal with local ruffians, no surprise since Jackie Chan's character wasn't in New York more than a day and got into a melee with the police. Then there are fights with more cops, with guards, with Rathbone's men, with Wu Chan's men, with Rathbone himself, and with Wu Chan as well as a few miscellaneous fights in between. They are all well staged and well choreographed by Chan, but, like the plot, after the first few of them they all begin to look and feel the same. One fight in particular stands out, though, because it includes a sweet and clever takeoff on "Singin' in the Rain." Unfortunately, it lasts only a moment and then it's back to the usual punch-and-tumbles. Not even a bit about a revolving secret passageway ripped off from "Abbott and Costello Meet Frankenstein" and later "Indiana Jones and the Last Crusade" can help a story line generally bereft of much wit or style.

Jackie Chan never changes in any of his movies, no matter who he's playing. He always remains his sweet, charming, honest, trustworthy, slightly naive, innocent, martial arts-expert self, forever the underdog who triumphs in the end and forever our good friend. He continues to be a pleasure to watch, but his persona alone can't sustain an entire movie. His sidekick, O'Bannon, is a bit more of an amiable jerk this time out, though, more self-centered and self-serving than ever. He's making a living as a waiter when we meet up with him, yet he says he's sold over a million copies of dime novels he's written about his phony exploits out West. Hard to understand where his money went except to say he likes to live high and spend freely. The other major character, Wang's beautiful sister, is a combination karate artist, serious do-gooder, and giddy schoolgirl. Needless to say, O'Bannon takes a fancy to her.

The acrobatics in the film are as much fun as always, Chan ever graceful and balletic, and the scenery of old London is lovely to look at; but as the endless, needless brawling gets old very fast. The movie shows up well, but there is not much in it that hangs together, just a series of rather senseless, comically violent episodes with little rhyme or reason to them; the film is all pretty tourist postcards interspersed with comedic action, most of it accompanied by very loud, contemporary pop music that is more incongruous than cute. Motion without excitement, action without suspense, and silliness without humor add up to less than what could have been, given the cast, the locations, and the big, big budget.

Like many films and their sequel, Shanghai Noon and Shanghai Knights have been released on Blu-ray as a double feature. While the merits of that are...up to you to decide, one can't but feel that its just a studio's way of drumming up some cash for a franchise that never had much power behind it.

With that being said, each film looks picture perfect with their HD 1080p transfer. The subtle hues of the West do well under Blu-ray, bringing an already vibrant landscape to a second life. Equally the same can be said for the sequel during their jaunts in old London. If you happen to be a fan of the city, you'll be pleasantly surprised with how it looks. The same can't be said for the audio however. Given that martial arts films are usually more visual faire, its not surprising that the audio has little to work with here.

When it comes to special features, each film comes with its own. Though there isn't much variation between the two. Each comes with an assortment of deleted scenes, behind-the-scenes feature, a fight scene break-down, and audio commentary. Nothing to get excited about here.

Overall that's what the Shanghai series comes down to, nothing to get excited about. Is it entertaining? Mostly. Will you want to watch it over and over? Unlikely.