When the evil mayor of Oakton decides to bulldoze Liberty Park and build a dangerous amusement park in its place, Surly Squirrel and his ragtag group of animal friends need to band together to save their home, defeat the mayor, and take back the park.

Purchase DVD/Blu-ray/4K physical copy of The Nut Job 2: Nutty by Nature today at

Download The Nut Job 2: Nutty by Nature in Digital HD/4K from the iTunes store. 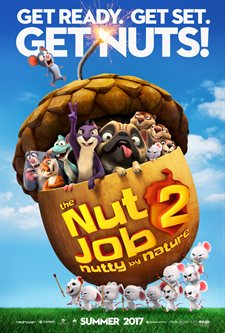 If you never saw 2014's The Nut Job, you missed out on some really cute, furry animals scrounging for a few nuts.  Well, there is more to the story than that but that gives you a basic overview.Three years later, the cuteness is back in The Nut Job 2: Nutty by Nature. Surly (Will Arnett; Arrested Development) and the gang return with a new crisis facing their very existence.  This time, they have to band together to defeat the greedy mayor (Bobby Moynihan; Saturday Night Live) and his plans for their home.

The animals of Liberty Park are living a life of leisure.  They hang out in the park (sometimes) but mostly they can be found in the basement of the now closed nut shop across the street.  They gorge themselves on all kinds of nuts and even play games and have a nut eating contests, but sadly have lost the ability to scavenge for food. Andie (Kathryn Heigl; Grey's Anatomy) is trying to get the animals to go back to their old ways but to no avail.  Surly has given them all a false sense of security until one day the nut shop blows and there is no more free food.

Meanwhile, the corrupt mayor has implemented a plan to bulldoze the animals' home – Liberty Park – to make way for his new amusement park – Liberty Land (Insert cheesy sign with bright lights here).  As the animals try to stop him, they encounter some setbacks along the way while they simultaneously search or food and a new place to live.  With nowhere to go and no food supply, they end up enlisting the help of the "cute" city mice lead by the small yet dangerous Mr. Feng (Jackie Chan; Rush Hour).

Arnett is a master at voice over work so he gives Surly an ease and fullness that the character requires.  Heigl's Andie is ok but the two don't really seem to have any chemistry, so their flirtation isn't really believable.  Maya Rudolph (Bridesmaids) as Precious and Bobby Cannavale (Ant-Man) as Frankie are also terrific.  Chan, though, is fantastic and his limited time in the film is most definitely memorable.  He is well cast and the perfect addition to the movie.  If they make a third installment of The Nut Job, I hope he will reprise his role.

The animation is well done and the colors are typical of an animated feature geared towards younger audiences.  Vibrant greens and reds catch the eye beautifully and the dark colors are still bright enough to not overshadow the scenes.  The only part I don't really understand is why Surly is a purple squirrel.  While it makes him memorable, I can't recall ever seeing a purple squirrel anywhere in nature. I even googled it to make sure I wasn't missing out on something but, alas, there is no purple squirrel in real life, which is a little bit of a letdown because purple happens to be my favorite color.

The script is cute enough and the story moves along and a decent pace.  There really isn't much that is unique or surprising about the film but then I'm sure the producers like it that way.  The mayor's daughter reminded me of Darla from Finding Nemo and I'm not sure why it's necessary to make the fat, little girl mean and almost a little sadistic.

There were a few laugh out loud scenes and, as I said, Chan is really great in his cameo.

I'm sure the kids will love it and the adults can sit through it without groaning.  At the end of the day, it's a cute movie.