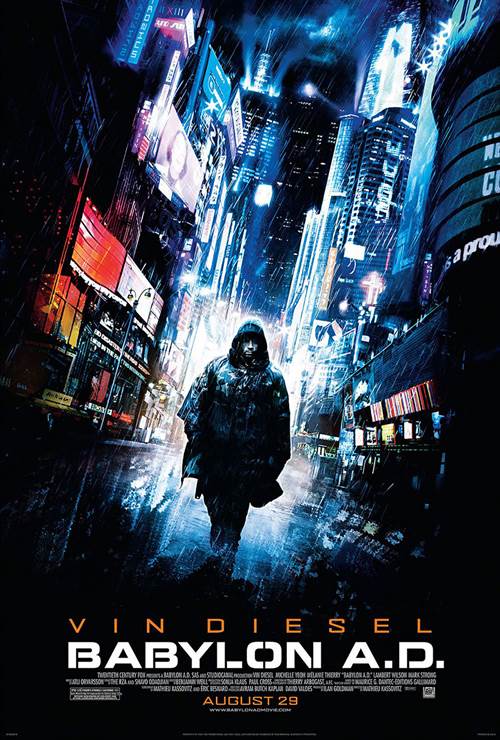 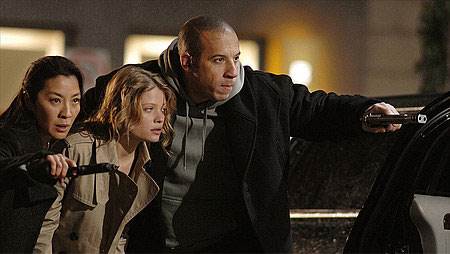 A veteran-turned-mercenary (Vin Diesel) agrees to escort a woman from Russia to Germany, not realizing that she's the host for an organism that a cult wants to harvest into a genetically-modified Messiah. Based on the novel by Maurice G. Dantec.

Download Babylon A.D. in Digital HD/4K from the iTunes store.


James Cameron's Marianas Trench Dive Called Off  3/22/2011 9:43 AM EST
James Cameron will have to search for a new dive location to do some research for his upcoming "Avatar" sequel.The Academy Award Winning director had planned on taking a custom built submersible into the Marianas Trench, the deepest part of the world's oceans, which is located off the coast of Japan. Given the conditions of the large, 9.0 magnitude of the earthquake, scientists say that the entire...  More>>

Babylon A.D.'s Director Is Not Crazy About His Own Film  8/26/2008 9:37 PM EST
"Babylon A.D." is getting some not-so-positive feedback already, and what worse, this time its coming from the film's own director.  Matieu Kassovitz recently spoke to AMCTV about his disgust over making the upcoming film.   "I never had a chance to do one scene the way it was written or the way I wanted it to be. The script wasn't respected. Bad producers, bad partners, it was a terrible experien...  More>> 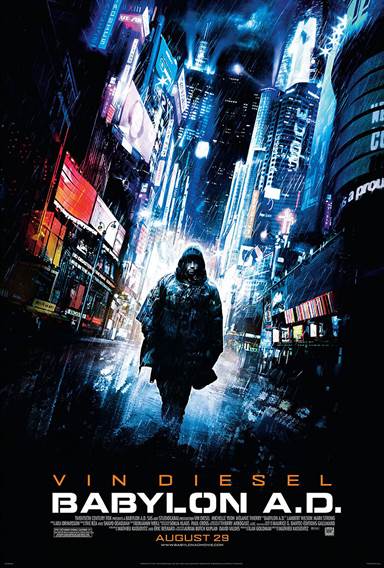 I like Vin Diesel--he's got screen presence. He's got charisma. I liked him in Pitch Black and I enjoyed them not overusing him in The Fast and the Furious. In order to see him in a good movie I may need to check out The Pacifier. That's a shame.

Babylon A.D., by Mathieu Kassovitz is based on a book (Babylon Babies by Maurice Georges Dantec--whom I expect would no longer recognize it). It follows Diesel as Toorop, an American mercenary in a future, war-torn Russia who is hired to get a young girl (Mélanie Thierry as Aurora) and her body-guard / mother-figure nun (Michelle Yeoh as Sister Rebecca) to the United States. Along the way they are pursued by shadowy figures and face various dangers, betrayals, and so on.

There is an evil cult that wants Aurora for their own purposes (probably nefarious) and Diesel might just be mercenary enough to hand over the girl who clearly need him for a bucket of money.

If Diesel is type-cast as anything it's as playing a tough-guy with a heart of gold. I say he can pull it off: he gives off "don't trust me" vibes but when he has to play the softer touch he does it credibly. He's a good choice for the movie. He also still makes a phenomenal physical specimen and brings his glowering intensity to the movie.

So, in fact, it's looking pretty good--if not especially deep. This keeps up for about 2/3rds of the movie. I wasn't in love with it--but I was reasonably engaged. I liked their use of parkour (the new "wire-fu"). I thought the use of special effects was good, if a bit unlikely (the snowmobile scenes were clearly over-the-top for the more gritty sequences) and Diesel and Yeoh both can act--so no problems there. The group filmed in Eastern Europe more or less on location and it all looks right: grim, gritty, and high-tech.

Having recently seen Children of Men as well as Babylon A.D. I am convinced more than ever that the primary advance the future will bring us is the ability to show moving type and graphics on any surface from a newspaper to a folding map to ads on the side of taxis. If it's happening in every movie it's in the zeitgeist--it'll happen in real life sooner or later.

It's towards the end of the film that it starts to unravel and then catastrophically break down. I suspect that whatever the end-scenes were supposed to be they simply did not come together. Either audience response testing nixed them or they ran out of money or the studio came in with a heavy hand. The director has blasted the studio for wanting to make a PG-13 rated movie and wimping out: maybe that's what happened. I can't say for sure.

What I can say is that the movie ends abruptly, with no closure, and makes, in the end, virtually no sense. It's not so much a massive non sequitor as it is simply one scene where we're going "Okay..." and then one more that makes us go "Huh?" and then the credits.

I think Babylon A.D. could be quite a good movie: I just wish I'd see the whole thing.