Returning stars Seth Rogen, Zac Efron and Rose Byrne are joined by Chloë Grace Moretz for Neighbors 2: Sorority Rising, the follow-up to 2014’s most popular original comedy. Nicholas Stoller again directs in a film that follows what happens when the will of parenthood goes against the bonds of sisterhood.

Now that Mac (Rogen) and Kelly Radner (Byrne) have a second baby on the way, they are ready to make the final move into adulthood: the suburbs. But just as they thought they’d reclaimed the neighborhood and were safe to sell, they learn that the new occupants next door are a sorority even more out of control than Teddy (Efron) and his brothers ever dreamed of being.

Tired of their school’s sexist, restrictive system, the unorthodox ladies of Kappa Nu have decided to start a house where they can do whatever the hell they want. When Shelby (Moretz) and her sisters, Beth (Kiersey Clemons) and Nora (Beanie Feldstein), find the perfect place just off campus, they won’t let the fact that it’s located on a quiet street stand in their way of parties as epic as the guys throw.

Forced to turn to the one ex-neighbor with the skills to bring down the new Greeks next door, the Radners—alongside best friends Jimmy (Ike Barinholtz) and Paula (Carla Gallo)—bring in charismatic Teddy as their secret weapon. If he can infiltrate the sorority and charm his way through it, the thirtysomethings will shutter the Kappas’ home. But if they think that their neighbors are going down without a fight, they have severely underestimated the power of youthful ingenuity and straight-up crazy.

Listen to the Neighbors 2: Sorority Rising soundtrack on Apple Music. 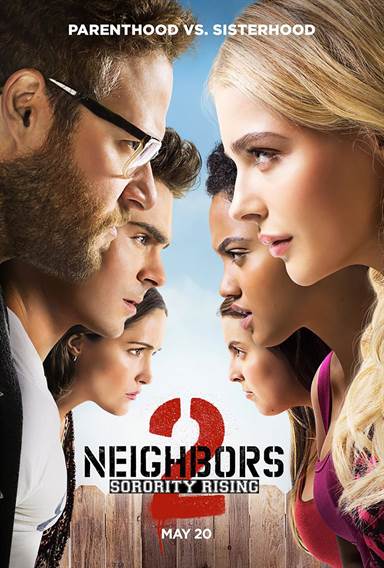 Crude, rude, obnoxious and offensive are all accurate adjectives to describe Neighbors 2: Sorority Rising.  As if the first film wasn't awful, yet funny enough, the second continues in the same vein of sophomoric frat humor.  While not quite as good as the first one, the sequel will remind viewers of all of the things they liked about its predecessor.

Mac (Seth Rogan; Pineapple Express) and Kelly (Rose Byrne; Insidious) Radner thought all their problems were solved when they finally managed to run out the Delta Pi fraternity that had moved in next door to them.  Now, ready to sell their house as they expect the arrival of their second child, they simply need 30 days of peace and quiet for the deal with the buyers to be finalized.  Unfortunately, that doesn't seem as though it's going to happen.

Shelby (Chloe Grace Moretz; Kick-Ass) is a freshman ready to experience all that college has to offer, including new found freedom.  However, when she becomes disillusioned with Greek life and the chauvinistic outlook of frat parties, she and her new friends decide to start Kappa Nu Sorority and throw their own parties.  Needing an off campus location to house their "club", they find the perfect rental right next door to the Radners.  Helping them to navigate the college party scene is a very "lost" college grad, Teddy Sanders (Zac Efron; Dirty Grandpa), who is just trying to find his purpose in life.

Efron, Rogen and Byrne make a great team, which is what drives the original and its sequel.  Their natural chemistry makes an otherwise ridiculous film a little more believable.  Adding Moretz to the mix just strengthens the appeal of what is essentially a good old-fashioned college humor film about partying and "finding one's voice".

The plot is stupid and has so many holes in it you could drive a Mack truck though them, but it's meant to be a brainless comedy and it certainly achieves that goal.  The "antics" are the same as the first film so while there isn't anything new, the bits that made you laugh the first time around remain in the sequel.  Luckily, the funniest bits from the original – the airbags - make a repeat appearance in this version as well, and they are just as funny the second time around.

The whole idea of Teddy  "growing up and finding himself", along with the message to the sorority girls about being individuals and "finding their unique voice", is an age old concept and doesn't add anything significant to the movie.

There are a couple of cute cameos from former Disney girls Selena Gomez (Wizards of Waverly Place) and Ciara Bravo (Big Time Rush) that adds a little fun to it all and giving the audience the sense that Neighbors 2: Sorority Rising doesn't take itself to seriously so neither should you.

If you love Neighbors then you won't be disappointed by the sequel, but if you didn't like the first one you'd be better off skipping this one all together.  Overall, it's not a bad film for what it is, but let's face it, it isn't going to be the break out film of 2016.

movieguynathan
Time for the second @flickdirct comedy screening for the week.
5/17/2016 6:59 PM EDT

luissaurus
favorite part of the first movie was deff the airbag scenes. laughed so much in the movie.
5/11/2016 7:11 PM EDT

jackmayes
My favorite scene from the first movie was when the frat boys hid all the airbags in the couples house. It was hilarious.
5/11/2016 5:16 PM EDT