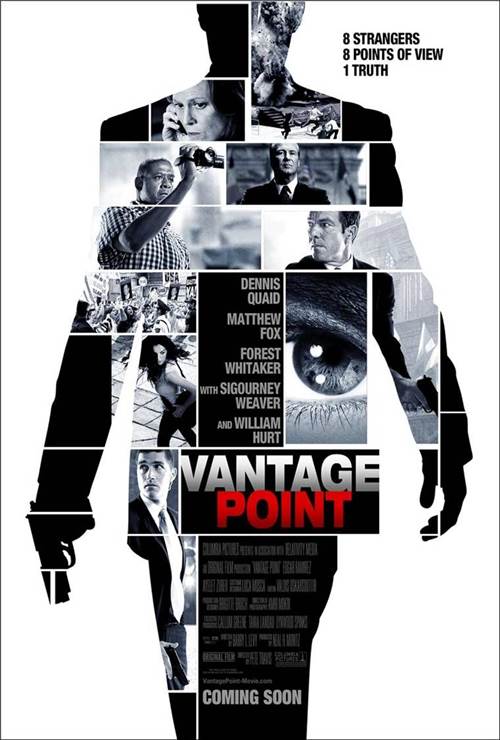 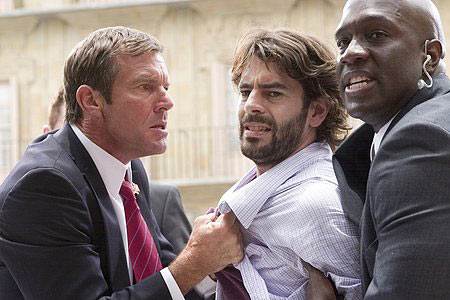 Thomas Barnes and Kent Taylor are two Secret Service agents assigned to protect President Ashton at a landmark summit on the global war on terror. When President Ashton is shot moments after his arrival in Spain, chaos ensues and disparate lives collide. In the crowd is Howard Lewis, an American tourist videotaping the historic event to show his kids when he returns home. Also there is Rex, an American TV news producer who is reporting on the conference. It's only as we follow each person's perspective of the same 15 minutes to and immediately after the shooting that the terrifying truth behind the assassination attempt is revealed.

Stream Vantage Point in Digital HD/4K from the AppleTV store. 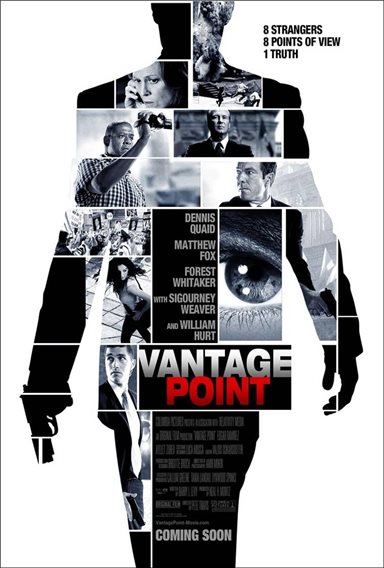 There are tricks you can use in film. You can show us re-winds, fast-forward, jump-cuts, and so on. You can use tricky camera angles to give us odd points of view on a situation. You can use framing to show us or not show us things the characters themselves can or cannot see. All of these tricks have an impact on the viewer. In the film The Rock there is almost no shot longer than about 4 seconds. The whole thing, in the tradition of 90's action movies, is shot as a kinetic commercial. When we get to the action scenes themselves the camera jumps like a hyper-active grade-schooler off his Ritalin and mainlining Jolt Cola.

In Vantage Point, the use of the "rewind the action" to show us the same scene over and over ... and over ... and (yawn) over also impacts the viewer: it creates frustration and boredom. The use of the camera-angle to give is a constipated-looking Dennis Quaid seeing things (on tapes) we cannot and going "Oh my God!" also generates frustration. I'm pretty sure that's not what first-time film director Pete Travis was going for but it's what I experienced.

The film's story is about the President of the United States (called POTUS in secret-service speak so we know they're insiders--but really they use code-names like Renegade ... which is Obama's and Evergreen which is Hillary's) who is giving a speech on terrorism in Salmanca Spain. Terrorists have his number and the secret service has a returning veteran who took a bullet for the guy coming back after convalescence and a nervous breakdown. Will he redeem himself? Hey, it's a sophisticated movie--not a Hollywood-ized action thriller. Will the cute moppet survive almost being killed? Hey, this isn't the spoon-fed formula. Are the ethnic people terrorists? Well, you know: this is cinema--not just a movie.

There are characters who are so easily made by the audience I'm surprised the characters don't make them sooner. There are actors there like Forest Whitaker who have almost literally nothing to do. Forest plays a guy on vacation who somehow makes into the heart of the huge political event. He is the world's worst camera man, standing in yokel-like slack-jawed awe-struckness waving his camera all over the place often looking at anything but the president. Of course he sees things that aren't meant to be seen--and he gets lucky when he runs around filming the action--but beyond that? Almost nothing.

And don't get me started on the plot: The time the president is most vulnerable is when he's giving a speech in public before thousands of fans which are (it turns out) loaded with terrorists, right? So what's the real secret plan? Why to ensure that the president is actually in his command center surrounded by secret service: that's where they'll actually get him! Huh? And it hinges on one guy who's not even a true-believer being able to take on the entire secret service and ... huh?

I think the moral of the story is this: "Don't go to Salmanca Spain to give a speech." That's about all I can take away. Oh, and one other thing: if your advisers tell you to bomb "a friendly Arab nation because they are harboring terrorists"? Yes, refusing is a good idea: but look closely. Their target may be a zombie farm from Resident Evil. You might want to blow that stuff up after all.

Pirates of The Caribbean: The Curse of The Black Pearl 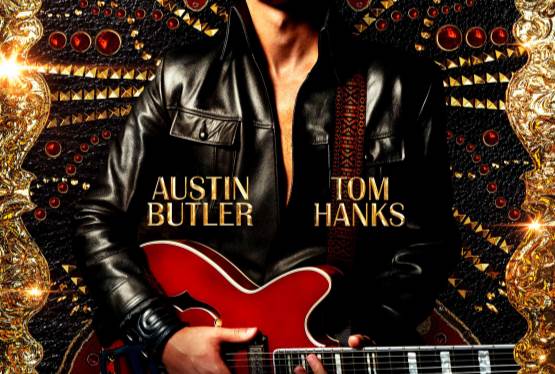