Born into the family business of race cars, Speed Racer (Emile Hirsch) is one of the track's hottest stars. Sitting behind the wheel of his awesome Mach 5, Speed consistently blows away the competition. When Speed turns down an offer from the head of Royalton Industries, he uncovers a terrible secret: powerful moguls are fixing the races to boost their profits. Hoping to beat Royalton at his own game, Speed enters the same grueling cross-country race that claimed his beloved brother's life.

Download Speed Racer in Digital HD/4K from the iTunes store. 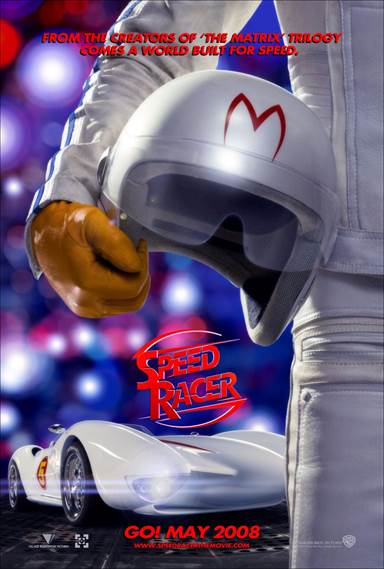 As Hollywood continues to mine the cartoons of Generation-X's youth I wonder if we'll see a live-action Smurfs movie with CGI-blue actors and Jessica Alba as Smurfette (Javier Bardem would sort of reprise his No Country For Old Men role in Gargamel!). When I heard they were making Speed Racer into a movie I was basically nonplussed.

I had come to Speed Racer, a 1960's cartoon featuring a young race car driver, his family (the "Racer" family: his first name really is Speed), and the various racing-themed villains that pursue them, as an adult. I'd seen it as a child but never really caught on to it. When a friend got the collection for my daughter, I watched a bunch, recalling the signature fast car the Mach 5 (interestingly the name in Japanese was Mach GoGoGo where the word "Go" in Japanese means Five--it was an English-Japanese wordplay of the type that was becoming popular when the manga was written).

It was primitive in some respects, violent by cartoon standards (people did die going off cliffs and such) and contained a moderately typical story-line with a bit of family drama (Speed has a missing older brother who might be the mysterious Racer X and supporting characters who'll appeal to kids: the somewhat chubby kid-brother Spritle (Paulie Litt) and his chimpanzee companion "Chim-Chim." My daughter thought it was okay. I could see how its iconic look could catch on--but it didn't reach out and grab me.

When I heard the movie was being done by the Wachowski Brothers, though, I was interested. Say what you want about the last two Matrix movies, the Wachowski Brothers are innovative film makers. Hanging characters from wires may not have been new to world-wide audiences but it was new to western ones. Bullet Time required new camera techniques--and while they may not think as deeply about their movies as, say, the Coen Brothers, they aren't making brainless films either. I was surprised that after the third Matrix movie they'd follow up with what was likely to be slotted as a kid's film.

When I saw Speed Racer in the theater last night, I think I understood why they chose it. There have been many cartoons adapted to the screen but this is the first time I think an actual live action cartoon has been made. Using high speed digital video to handle focus like an anime movie is only part of the trick. Speed Racer looks--and feels--like an anime that just happens to use real people (kind of like how the video game Mortal Kombat reprized the animated Street Fighter characters with real people).

The world of Speed Racer is an alternate modern-day where racing is the world-sport and super-corporations compete against each other on wild corkscrew tracks with cars moving at impossible speeds and using violent driving techniques to win. Speed, himself, played by Emile Hirsch, is a racing child prodigy, now a young man who is being courted by the evil racing sponsors. His family stands behind him but wants autonomy ... and he wants to race--as well as his now deceased older brother the infamous Rex Racer.

The story from here is a series of surreal hyper-kinetic race scenes, a sprinkling of family drama, and some good-guy / bad-guy stuff. For what it is, it holds together amazingly well which is to say it holds together like it was coated with duct-tape. The movie's structure is probably a bit sophisticated for kids with flash-backs, flash-forwards, and some visual-metaphor thrown in for kicks. Some of the themes echo the Brother's previous V for Vendetta with a distaste for capitalist control.

On the whole, I enjoyed it. Part of this was due to low expectations--part of it was due to the generally good natured sense of the movie. It works reasonably well as both a kid's and adult's show. The grown-up parts are overwrought to an extent but I found the acting reasonably solid (the dad character Pops Racer gets good treatment by John Goodman) and understood why there was a chimp there (because he was in the cartoon). Part of what I liked was that after I got used to the idea that the characters were racing on the real-life equivalent of toy race-tracks with loop-the-loops and jumps and things was that it didn't exactly look like CGI.

I mean, it is--there is an actual ("practical") Mach 5 race car--there's a real actor in it--but most of what you are seeing, practically all of it--is done against a green screen (perhaps where the directors feel most confident?)--but it doesn't look like a made-for-TV CGI show. It looks just a hair more real and it's an interesting effect (note: a lot of it is clearly not real--the city sky-lines, the crowds, etc.--but those don't look real because they are not supposed to).

The action scenes, for set pieces we pretty much understand how they'll end, do an okay job of being exciting--I bet if I were 10 I'd be enthralled--and the show, despite being a hair over 2hrs long moves ahead reasonably fast. There are a few truly stunning visuals (I'm thinking of the cross-country rally-race scene where the queen of some desert nation kicks off the race standing atop a castle with her flare gun). It might not be a sophisticated story but it certainly wasn't basic 101-film making.

Should you see it? If you're one of the fans who enjoyed MTV's early morning Speed Racer revival or just happened to like it from your youth you'll probably find it enjoyable on that front. If you have young kids--especially boys--go see it right now. Otherwise, I think it's maybe a wait for video: without having some connection to the original material the basic film itself isn't, I think, commanding enough to stand on its own for an adult audience.