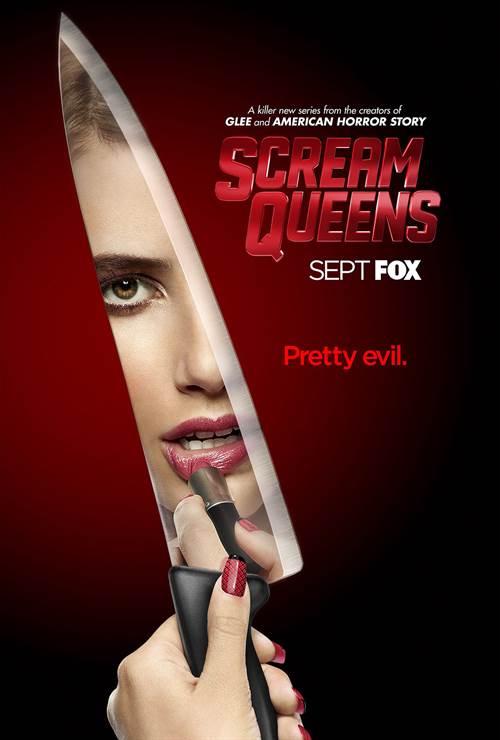 The girls of Kappa House are dying for new pledges. SCREAM QUEENS is a new killer comedy-horror series from Ryan Murphy, Brad Falchuk and Ian Brennan, the Emmy- and Golden Globe Award-winning executive producers of GLEE and “American Horror Story.”

Wallace University is rocked by a string of murders. Kappa House, the most sought-after sorority for pledges, is ruled with an iron fist (in a pink glove) by its Queen Bitch, CHANEL OBERLIN (Emma Roberts, “American Horror Story: Freak Show,” “Scream 4”). But when anti-Kappa DEAN MUNSCH (Jamie Lee Curtis, “Halloween,” “A Fish Called Wanda,” “True Lies”) decrees that sorority pledging must be open to all students, and not just the school’s silver-spooned elite, all hell is about to break loose, as a devil-clad killer begins wreaking havoc, claiming one victim, one episode at a time. Part black comedy, part slasher flick, SCREAM QUEENS is a modern take on the classic whodunit, in which every character has a motive for murder…or could easily be the next blood-soaked casualty.

Stream Scream Queens in Digital HD/4K from the AppleTV store. 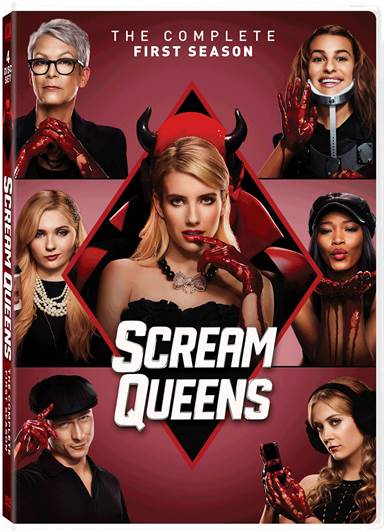 If your holidays this year are so stressful your about to scream… why not binge watch Fox's first season of Scream Queens out on DVD!

If you haven't heard of Scream Queens as of yet, it's a fun, campy, Comedy/Horror series that kinda feels like it plays off of the Scream series of movies that were released back in the end of the 90s. Let me give you the groundwork.

Chanel Oberlin (played by Emma Roberts, last seen in AHS & Nerve) leads the Kappa Kappa Tau sorority at Wallace University and rules over her fellow sorority sisters, "The Chanels" with an iron fist. Make no qualms about it, Chanel Oberline is the Queen and has no problem letting everyone know that. The Other Chanels, Chanel #5 (played by Abigail Breslin of Little Miss Sunshine & Zombieland), Hester Ulrich (Lea Michele of Glee), Zayday Williams (Keke Palmer) and Chanel #3 (Billie Lourde) and Grace Gardner (Skyler Samuels) are not only controlled by the Miss Oberline, but are also trying to stay alive, as people start dropping like flies. It seems as if there is a serial killer on the loose on the Wallace campus and in great horror fashion, he wears a great costume…The Red Devil!

Chanel Oberlin's boyfriend, Chad Radwell, (played by the very funny Glen Powell who was in The Dark Knight Rises & Expendables 3) who Chanel is dedicated to but he cheats on her quite consistently, is pretty much here for comedy factor alone. Chad and the rest of his sorority brothers are corny as hell and, at times, hysterically funny. Of course, at some point, they try to stop The Red Devil but not much luck there. The best of the characters in the cast is the Legendary "Scream Queen" herself, Jamie Lee Curtis (Really, you need me to refer to Halloween?), who plays Cathy Munsch (yes, that's really her name) the Dean at Wallace University. It's her job to clean up this mess and hopefully stop the murders so the school can stay open.

The thing with Scream Queens is, while there is an awful lot of killing going on, it's so far over the top and comical to the point you can't stop watching. It's almost as if you can't believe what you just saw and you have to see what could possibly top it in the next episode. Where did this creative, funny and campy series come from? The minds of Ryan Murphy & Brad Falchuk who were both involved with the very popular series American Horror Story along with Glee. Along with Ian Brennan who worked on Glee himself, these three guys put together one of the strangest, most fun series that I'm generally not willing to admit that I watch.

Underlying the story is a great flashback to 1995 and a tragedy that happened within the sorority house and what's fantastic about this series is that they capture the music of that time period and use it through out the series. Hell, just the music alone was a blast from the past.

Granted, this time of the year is generally saved for Peace and Love and the reason for the season, and while the theaters are full of Oscar potential and TV is quiet for the winter breaks, if you want to just watch something fun, Scream Queens is a great choice!

Scream Queens Season One comes with a few bonus features - A look at the Killer Wardrobe, Deleted Scenes,  Interview with the Cast and their Comic Con Panel.

I give Scream Queens Season One 3.5 stars out of 5. It may be shallow as hell, but it's creative, funny and, at times, laugh out loud funny.