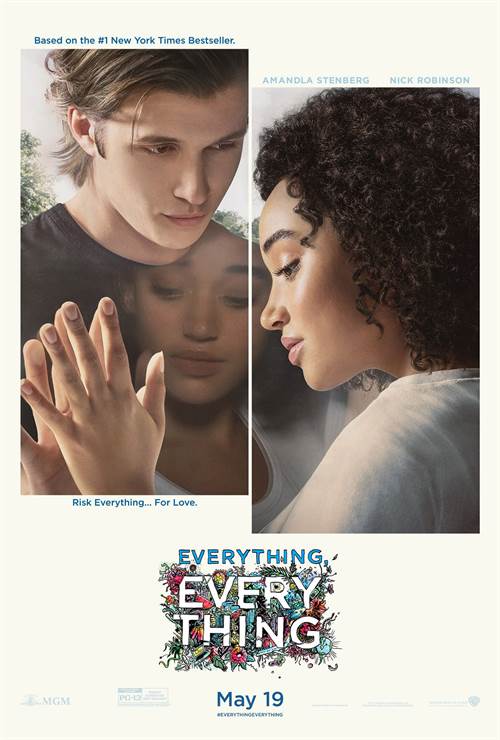 A teenage girl (Amandla Stenberg) is unable to leave her home because she has an immunodeficiency that makes her allergic to almost everything. However, her life changes for the better when she begins to communicate with the boy next door (Nick Robinson). Everything, Everything was directed by Stella Meghie, and was adapted from the YA novel of the same name by Nicola Yoon.

Purchase DVD/Blu-ray/4K UHD physical copy of Everything, Everything today at Amazon.com

Stream Everything, Everything in Digital HD/4K from the AppleTV store.

Everything, Everything images are © Warner Bros.. All Rights Reserved.

Everything, Everything Blu-ray Review 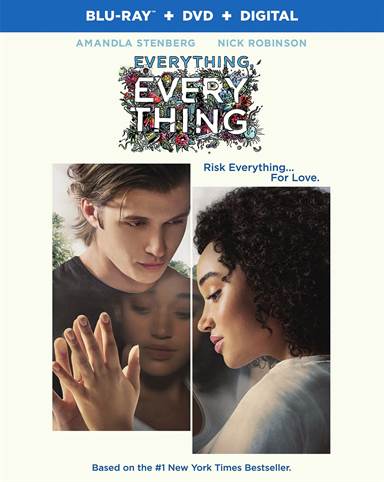 As a parent, what would you do to keep your child safe? Would you lock them in a tower like Rapunzel? For Pauline (Anika Noni Rose; Dreamgirls), it seems that is the only solution but was her decision the right one? For many years, it seemed so until one day everything changed.

Maddy (Amandla Stenberg; The Hunger Games) isn't your normal eighteen-year-old. She's sick. She has something call SCID (Severe combined immunodeficiency) which means her body can't fight off viruses and bacteria like normal people. If she goes outside she could become very sick and possibly die so she hasn't left her house in 15 years. The only people ever to really come inside the house are her mother, the nurse who takes care of her (Ana de la Reguera; Cowboys & Aliens) and the nurse's daughter (Danube Hermosillo; The Bold and the Beautiful)– who is Maddy's only real friend. However, when a new family, including a cute teenage boy Olly (Nick Robinson; Jurassic World), move in next door everything suddenly changes.

Olly's family moves around a lot. His dad has a hard time keeping a job and he doesn't treat Olly's mother, sister or Olly very well. When he sees Maddy through her window he wants to get to know her more. Unfortunately, due to her condition, they can't meet so they have conversations through text and email. When Maddy's nurse lets Olly into the house (unbeknownst to Maddy's mom) it is obvious they have a deep connection. When Maddy risks everything to go outside to help Olly she ends up sick and her mother forbids her to see Olly again. However, having had a taste of freedom, even though it makes her sick, Maddy decides to live a shorter life but to live free so she and Olly fly to Hawaii. What Maddy gains and discovers there is eye opening.

Everything, Everything isn't everything unless you are a teenage girl (being a former one, I can say that). It has all the formulaic ingredients to appeal to the female tween/teen demographic with a cute boy who finds a pretty girl funny and interesting (and pretty – did I mention pretty). However, there are few things that don't add up plot wise to a questioning adult, so unless you plan to watch with your 14-year-old eyes on, you may not find it as appealing.

The cast is lead by two young talented actors, Stenberg and Robinson. She blends sweetness and lightness with melancholy and, eventually, anger. He portrays Olly with a blend of comedy and adventure that belies the pain he is feeling underneath. Noni-Rose is stern with a bit of softness to her, while de la Reguera plays the nurse who is more like a friend (which she really is and what ultimately gets her in trouble).

The Blu-Ray is presented in 1080p High Definition video with a 1.85:1 aspect ratio. I have to say that the scenery is particularly beautiful as the emphasis is trying to bring the outside into Maddy's world. The foliage is lush and green and the blue of the ocean is a clear aqua.

The DTS-HD Master Audio 5.1 is nicely blended across all channels and the dialogue is clear. The disc offers two extras – deleted scenes that are worth watching and a behind-the-scenes feature called Trapped in Love: The Story of Everything, Everything.

The premise is recycled with a twist and the cast does nicely but Everything, Everything isn't for everyone. True romantics especially females in the 13-18 range will "get it" but grown men who watch Sunday Night football won't. Overall, it's a sweet story that is done well enough.

Buy it for your typical teenage girl. They will love you for it.