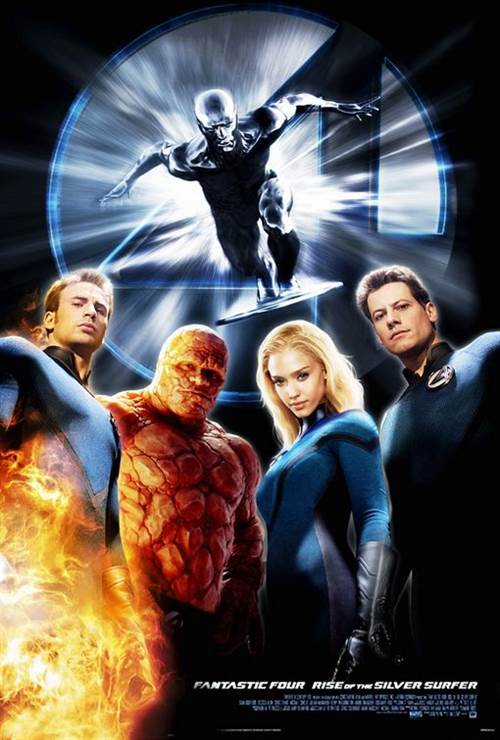 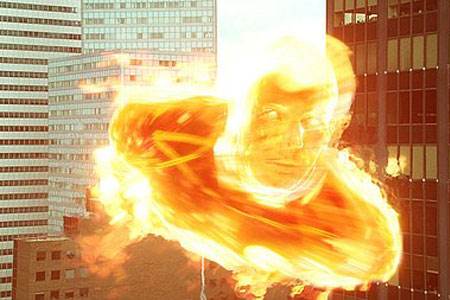 In what will surely be an effects filled blockbuster the fantastic four will battle the intergalactic villian Silver Surfer in a plot to destroy the earth. Returning are Ioan Gruffudd as Richard Reed , Jessica Albo as Sue Storm, Chris Evans as Johnny Storm and, Michael Chiklis as Ben Grimm.

The group will also have to contend with the surprise return of Dr. Doom as they uncover what Silver Surfers motives really are.

Download Fantastic Four: Rise Of The Silver Surfer in Digital HD/4K from the iTunes store.


Analysts Predict $60 Million Loss for Fantastic Four  8/11/2015 12:28 PM EST
20th Century Fox could be writing off more than $60 million on the newest incarnation of the Fantastic Four franchise.The film, which cost $120 million, earned only a mere $26 million domestically during its opening weekend. This number didn't even reach the low estimate of $27 million that experts were predicting.  Barton Crockett, an analyst at FBR & Co., said this amounts to "a negative start t...  More>>

Toby Kebbell to Play Doctor Doom in Fantastic Four  4/2/2014 1:24 PM EST
Toby Kebbell, who has acted in films "War Horse" and "The East", has been chosen to play Doctor Doom for the upcoming "Fantastic Four" film.The reboot will feature the four as young men and women and is slated for a June 19, 2015 release. A sequel will be released in Summer of 2017.Kebbell also stars in "Dawn of the Planet of the Apes", which will be released in July. Countdown to the release of F...  More>>

Fantastic Four Reboot Cast Chosen  2/20/2014 3:54 PM EST
It looks like the new "Fantastic Four" lineup has been cast, according to reports.Currently, Miles Teller, Michael B. Jordan, Kate Mara and Jamie Bell are all rumored to be nearing deals with 20th Century Fox. The studio had no comment about the news, however. Supposedly, Bell will be playing Ben Grimm (The Thing), Jordan will be playing Johnny Storm (the Human Torch), Mara will be playing Sue Sto...  More>>

Fantastic Four Reboot in Pre-Production  4/4/2013 2:15 PM EST
Josh Trank,  director of "Fantastic Four",  announced via Twitter yesterday that pre-production has started on the film. "The Fantastic Four reboot has arrived. Starting pre-production for a September 2013 start in Vancouver. #yvrshoots"Some fans are hoping that the reboot goes ina bit different of a direction that the previous two "Fantastic Four" films, having a bit more of a darker tone, perhap...  More>>

Matthew Vaughn Signs Up For Fantastic Four Reboot  2/25/2013 12:26 PM EST
Matthew Vaughn,  who directed "X-Men: First Class", has signed on to produce the upcoming "Fantastic Four" reboot. marvel's mark Millar announced the news via Twitter in Friday. Josh Trank (Chronicle) is attached to direct the film, which is due out in March 2015.  Everything is still in the planning stages for the film, so not much more information is available as of yet.Vaughn also produced "Kic...  More>>

Marvel's Fantastic Four Getting Ready For Reboot  9/1/2009 3:28 PM EST
According to Variety, "Fantastic Four" will be coming back to the big screen. 20th Century Fox already is moving ahead with the plans but hasn't given any information about what's in store for the "Four". The revamped film will be written by "green Lantern" scribe, Michael Green, and will be produced by Akiva Goldsman, of 'Heroes" fame. There is no word on whether or not any of the original cast (...  More>>

Fantastic Four Prequel To Feature Galactus  3/4/2008 11:11 AM EST
Fans of Galactus, the world devouring entity from the Silver Surfer comics, will soon be shown in his true light.  A prequel to the "Fantastic Four: Rise of the Silver Surfer" has been planned to showcase the giant character, which was only briefly shown in the Fantastic Four film.J. Michael Straczynski told reporters at the Wondercon Spotlight panel that Galactus' character was being held off on ...  More>> 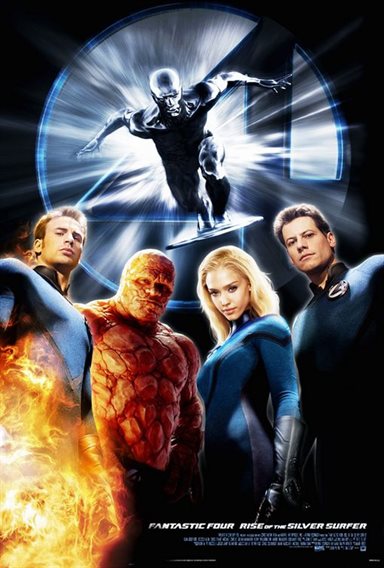 The first in the series sold out one of the greatest villains in comic history by trying to make Dr. Doom into Lex Luthor. Maybe you can't blame them too harshly: they got the titular four down pretty well--wasting half the movie on a lack-luster adversary might not be the kiss of death since there's still many iconic stories to tell. One of the more iconic being the showdown between the FF and Galactus.

For those of you who don't know, Galactus is a ginormous dude with a funny helmet who eats planets. Like ours. Chomp.

Before he dines, however, he sends his herald, an incredibly powerful guy with a flying surfboard to come and, like, inform us ... or soften us up ... or something. This guy, who is all metallic-reflective and flies on said surf-board is called The Silver Surfer. Way back when, comics weren't all that creative, I guess (see: Super-man and Bat-Man, yeah?).

So anyway: this world-ending threat made a decent splash in the comics at the time and proved to be, actually, one of the more interesting stories in the canon. The Surfer wasn't exactly a bad guy ... and Galactus is more like a cosmic vacuum cleaner than a mustache-twirling villain. It was interesting--and it was "next up."

I was going with a True Believer--a fan who liked the first and, he told me, used to buy the comic. I wondered if he'd like the second as well.

Turns out he did. This, however, is not a good sign.

Bait And Switch
The movie goes wrong in many, many ways. The first and most glaring is that the villain of the piece--the power behind the scenes--looks like a 100 ft tall guy in a blue and purple outfit. Since they can't show him on screen, Galactus gets shoehorned into the last 10 minutes of the movie (kinda--as in you hear he's out there but there's no screen time at all) and instead we get ... Dr. Doom ... again.

And, of course, since we can't have a 'name' actor in a movie without showing his face? The mask comes off--and the armor--so he's the overly smarmy Julian McMahon. Worse is the American general who veers from simply unlikeable to topically evil when he tortures a captured character with the interrorgator declaring "I am forbidden to do certain things because of the human rights laws--fortunately, you are not human!" Well, it's good to see Bush is out of office in the FF's universe.

The Agony of Being Super
Successful supers-movies capture at least some of the joy of being a super hero. It looks like it's fun to be Batman in Begins. It seems like it'd be cool to go to the X-Academy. It sure doesn't look like Spiderman is having all that much fun--and The Hulk is a one-way ticket to a zoloft overdose. In Rise (which is, in my opinion, 'failed'), the central character, Mr. Fantastic (the stretchy guy) has to offset the natural ebullience of the Thing and Torch so he has his own ... 'drama.'

He's getting married and his bride (Invisible Woman) is pissed that they keep getting her big day delayed by threats to global security only they can handle. And that rat-bastard Mr. Fantastic keeps cheating on her with his save-the-world job. Sigh: why can't he just settle down?

When threats to global climate and giant bottomless pits start appearing around the planet and the military comes to him? She's certainly not going to have him help! And worse: she found him at a bachelor party. The horror!

This makes her come off as petty, shallow-minded, and absurd. Why we have the running theme of this through the story is beyond me: Reed even says, at one point, he's the preeminent mind on the planet and he's vital to saving the world: if Sue Storm, who wants to marry him, can't see that, she's blind as well as being able to turn invisible.

Yes: Mr. Fantastic is overly obsessed with science ... it could get a little annoying--but celebrities put up with fans and lack of a mundane public life--and they aren't saving the planet. I can only figure that this is done since "growing up" seems to be part of the super-hero story these days.

Not getting its own 'joke'
In the big scheme of things, a little pandering isn't bad: we all know it happens--when the Torch shows up with a prototype new uniform, so covered with logos, that looks like a racing outfit, it's funny. When Richards unveils the (iconic) Fantastic-Car with Dodge logos all over it, it turns out the movie is its own joke.

There is worse. And it's spoliery. So I'll be careful: Imagine that you were asked to do something horrible--but you did it because ... 'you had no choice.' Then, you decided that not only did you have a choice--but all that horrible stuff you were asked to do? You never needed to do any of it. In fact, by making a personal sacrifice you could not only save your loved ones ... but billions of others ... and you never cared to? Would that make you heroic? Or weak?

The movie doesn't get that--but that's what it sets up with the end sequence.

Finally, for the "moral message" of the movie (since apparently with-great-power-comes-great-responsibil
ity was taken ... as Sue and Reed decide to head off to middle America somewhere and lead normal lives) there is some boiler-plate about 1-man-show stuff (there's no 'I' in TEAM, right?). So the ending? One guy: saving the day. All the way. It's not even the guy you think it is.

The End?
Would I see any more FF movies? I suppose so--if my friend wanted to go. For all it's flaws, the FF themselves are likable enough and the Thing/Torch interaction continues to be strong. It's clear that Doom, in his damaged incarnation, is around to stay. That's unfortunate: like Roland and Emerich "improving" Godzilla, the film maker's take on Doom isn't just boring, it's cringe-inducing. Like The Smurfs, will we have to see the same formulaic bad-guy hounding the heroes at every turn?

Or will we, you know, get the Mole Man?