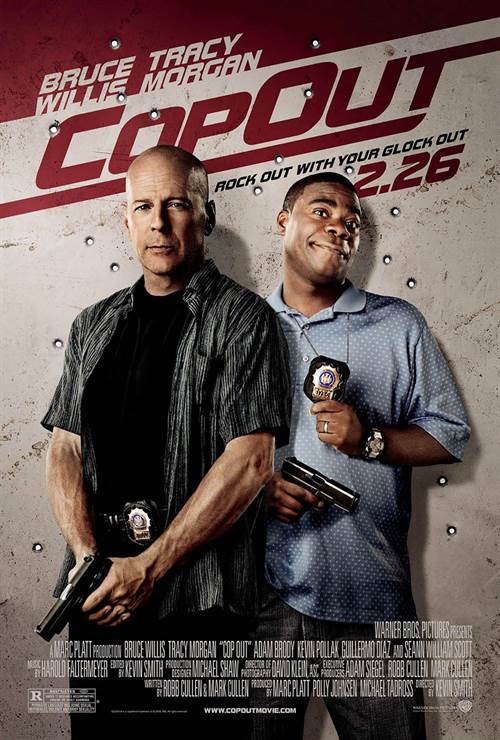 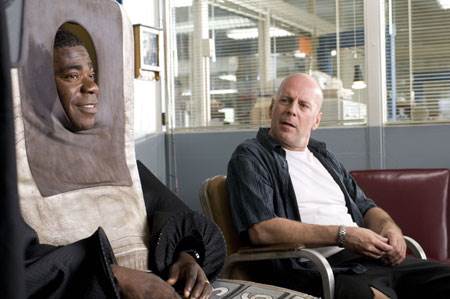 Two longtime NYPD partners on the trail of a stolen, rare, mint-condition baseball card find themselves up against a merciless, memorabilia-obsessed gangster. Jimmy (Bruce Willis) is the veteran detective whose missing collectible is his only hope to pay for his daughter's upcoming wedding, and Paul (Tracy Morgan) is his "partner-against-crime" whose preoccupation with his wife's alleged infidelity makes it hard for him to keep his eye on the ball.

Stream Cop Out in Digital HD/4K from the AppleTV store.

Cop Out images are © Warner Bros.. All Rights Reserved. 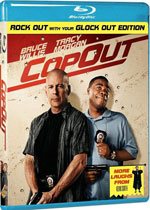 Some time ago, Cop Out director Kevin Smith (Clerks, Chasing Amy) played a minor role in Bruce Willis (Die Hard, The Sixth Sense) action vehicle Live Free or Die Hard.  He told this story in one of his Evening specials.  At some point later, Willis found that Smith was a real live writer and director of real live-action movies, and contacted him to see if he'd like to do a movie with him.  Smith, who is very obviously and admittedly a huge Willis fan, excitedly searched for an appropriate idea, but ultimately, with a heavy heart, replied that no, he couldn't write a movie even as appropriate for his filmography as Hudson Hawk.

We have still not gotten that movie — this one not having been written, per se, by Smith — but Cop Out is likely as close as we're going to get.  It answers the question "what do you get when a film geek gets a real budget and Bruce Willis to put in a Bruce Willis action movie about action movies, which often coincide with Bruce Willis movies?"  The answer is, if you're the particular sort of moviegoer who cares about such arcana, just what you'd expect.

I care, and let us set aside the self-referencing obsession with homage to the form of buddy-cop film that Cop Out practices, though it takes that to the obsession of refusing to rise above its form even when it knows it's perfectly capable of doing so.  If you like to listen to Kevin Smith talk about things, and please don't see this film if you don't, you've probably seen the Evening specials, and in that case, if you don't care to sit through yet another buddy-cop film just because Smith was involved, this Blu-Ray has a pleasant surprise for you: instead of watching the film, you can watch it, but with Kevin Smith appearing on screen, talking over the main dialogue, introducing and inserting deleted scenes and outtakes, pausing the film while he goes on about something or another for a while, and skipping around to show you what he's talking about.  He even troubled himself to berate me once for not even watching the film before this special version, but, him being inanimate, I was able to easily ignore him.

It's a new special feature that Warner Bros. is, according to Smith himself within the special feature itself, trying out with different well-known directors with cult followings, though I cannot imagine anyone else with whom the feature would be at all interesting, given that this particular iteration pushes the whole film near the three-hour mark, and few directors have sufficient screen presence to hold anyone's interest for that long, or would even care to try.

Talk about his film he does, and despite occasionally slipping into the circle of love all too many commentaries are guilty of, the praise is sometimes deserved.  This cast has comic talent, and that combined with Smith's own in situ style of script editing brings quite a few laughs.  Particularly deserving was Rashida Jones (The Office, I Love You, Man), whose role apparently grew to accommodate her comedic acumen.  For me, though, the real comedy came from Smith's effectively plastering his persona all over the film in this special feature.

As much as I may have enjoyed this exercise in director ego-stroking, though, I didn't forget that all this was papering over the underlying problems of a film that just isn't terribly funny by itself, nor even a little original.  Supposed show-stealer Seann William Scott (American Pie, Role Models) was anything but, and it was a major blemish on the commentary feature to include him as a major element.  I can only imagine how frustrating it would have been to see the version of the film that included much more of his character, as Smith explained was originally planned.

As I've said, unless you're a big fan of Kevin Smith being Kevin Smith or Tracy Morgan (Saturday Night Live, 30 Rock) being Tracy Morgan, I would skip this film in your place.  Otherwise, for the Smith fans, don't let Smith's admonishments get you down: see the "Maximum Movie Mode" version, and pretend you're watching another Evening.  Or better yet, rewatch Chasing Amy or Clerks, the former of whose superiority even Smith obliquely acknowledges at one point, as may strike your fancy.