The best thing about The Expendables is the cast. So many action heroes all in the same movie is a thrill for anyone who likes action movies 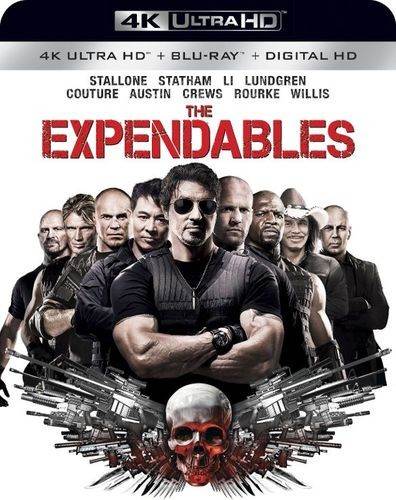 Purchase   DVD/Blu-ray/4K UHD
When The Expendables came out seven years ago, it was a who's who of today's best action heroes and promised to be jam-packed with the type of work they are known for.  It didn't disappoint and spawned two more films in the franchise.  The original offered another Sylvester Stallone (Rocky) production as he not only starred in the movie but co-wrote and directed it as well, and it appealed to a certain segment of the population.  Now, with advanced technology, Lionsgate has decided to release the movie on 4k Blu-ray, just in time for the Father's Day gift buying frenzy (Or Mother's day of your mom happens to be the type of woman who is into watching movies where everything blows up).

Barney Ross (Stallone) leads a group of mercenaries for hire who will do the job if the price is right.  They are stealthy, skilled and can kill a man in about a thousand different ways.  They seem to have the latest technology at their disposal as well and can be ready to go at very short notice.  They aren't nice people and they certainly aren't "superheroes".

When Ross is approached by "Mr. Church" (Bruce Willis, Die Hard) to take out General Garza (David Zayas; Dexter) and his henchmen who have taken over a small South American Island, he and Lee Christmas (Jason Statham; The Transporter) fly down to find out what is going on.  After some recognizance with the aid of a local woman named Sandra (Giselle Itie; The Prophet), who, it turns out, is the General's daughter, they decide not to take the job.  However, when Sandra keeps popping into Ross's mind he goes back to the tiny Island to rescue her.  In doing so, he ends up killing the real bad guy, a former CIA agent named James Munroe (Eric Roberts; The Dark Knight) who was using the island to produce drugs.

The best thing about this film is the cast.  So many action heroes all in the same movie is a thrill for anyone who likes action movies.  Add on the scene with Stallone, Willis and Arnold Schwarzenegger (The Terminator), and fans go crazy.  While the scene only lasts about a minute, it left a lasting impression on those who love action stars.  Statham is always terrific, as I have yet to see him in a bad role.  He exudes a certain sex appeal and seems hard as nails on the outside with a warm and fuzzy inside. The cast also includes Dolph Lundgren (Rocky IV), Jet Li (Hero), Steve Austin (Damage), Randy Couture (Big Stan), Terry Crews (Everybody Hates Chris) and Mickey Rourke (The Wrestler).

The 4K Blu-ray is presented in 2160p Video quality with an aspect ratio of 2.40:1.  The pictures is sharp and the colors are excellent.  However, what happens so often with 4K also happens here and the special effects look especially fake.  The audience can tell when a green screen has been used in the background because it is very obvious.  It is, unfortunately, distracting and takes away from the overall effect.  The Dolby Atmos audio quality terrific and the surround sound is enjoyable, with bullets flying by and explosions that shake your walls (if you turn the volume loud enough).

The extras are located on the traditional Blu-ray and include audio commentary from Stallone that is amusing and interesting, the Comic Con 2010 Panel, Inferno: The Making of The Expendables with over an hour of footage and interviews, From the Ashes: Post Production, a gag reel, and one deleted scene.  For any Stallone and action movie fan, these are great to watch.  Unfortunately, the set only includes the theatrical cut instead of the more interesting director's cut.

The original plot lacked a cohesive storyline for the most part and seemed to be merely filler in between the scenes where they could blow something up.  Therefore, I wouldn't necessarily recommend this set unless you are (or know) a true die hard action movie fan.  For those individuals, this is one of the best around.

For more information about The Expendables visit the FlickDirect Movie Database. This release has been provided to FlickDirect for review purposes. For more reviews by Allison Rose please click here.

The Expendables images are © Lionsgate. All Rights Reserved. 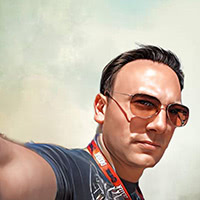 Chris Rebholz
The Expendables is a no holds barred, make no apologies, straight up action flick. Within the first ten minutes of the movie we see what kind of guys we are dealing with and what we can expect from them throughout the course of the movie. We have assembled a who's who of action stars, ranging from t...
Full Review | Grade: A