Davis is masterful as the strong leader of this resilient group of women and Rodriguez and Debicki match her in every scene. 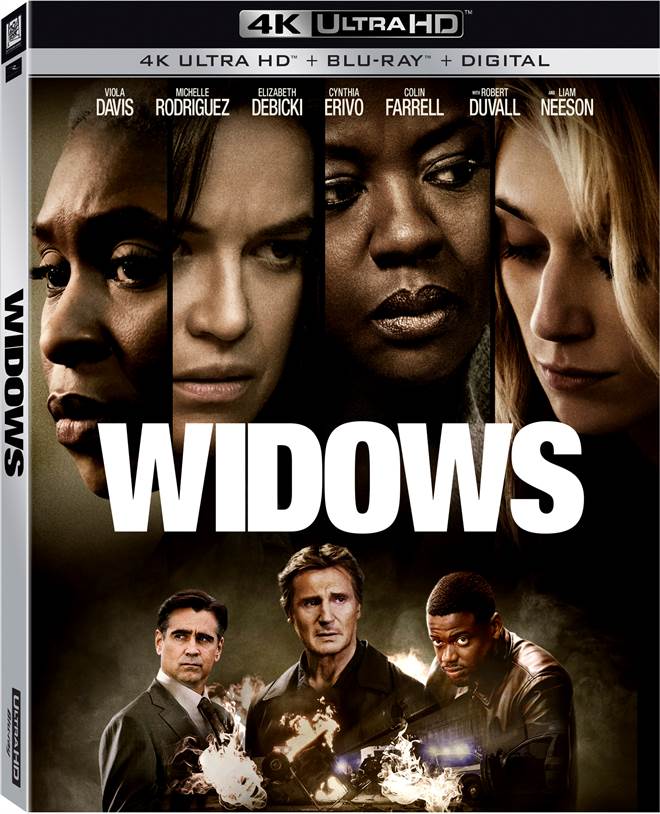 Purchase   DVD/Blu-ray/4K UHD
What would you do if your husband, whose livelihood is crime, suddenly dies in a job gone bad?  What if that same husband leaves you the plans for his next heist? What if mob-like boss shows up demanding the two million dollars your husband stole from him the night he died?  Welcome to Veronica's (Viola Davis; Fences) world.  In the course of a few days she loses her husband, Harry (Liam Neeson; Schindler's List), has her own life threatened and decides to become a criminal.  However, even the "best-laid plans" don't always work out and Veronica finds out that things aren't always what they seem in Widows.

Veronica knew of her husband's criminal activity but was purposely never involved in any way.  However, all that changes one night when Harry steals money from a political candidate, Jamal Manning (Bryan Tyree Henry; Hotel Artemis).  Harry and his accomplices are all killed in a shoot-out with the police and the money burns up in the van.  This understandably angers Jamal who threatens Veronica and gives her a month to come up with the money.  At the same time, Veronica receives a package from her dead husband that leads her to the plan for his next heist.  Veronica, instead of selling the plans, recruits the wives of Harry's dead team to help her pull off the job and split the money.

Veronica, Linda (Michelle Rodriquez; The Fast and Furious Series) and Alice (Elizabeth Debicki; Guardians of the Galaxy, Vol. 2) work quickly and meticulously to plan the heist of the secret vault in political candidate Jack Mulligan's (Colin Farrell; In Bruges)house (are you getting the political ties here?).  When their driver gets murdered by Manning's henchmen, the ladies add Linda's babysitter, Belle (Cynthia Erivo; Bad Times at the El Royale) to their team.  With everything in place, they pull off the heist but not without some glitches and surprises along the way.

Talk about your women's empowerment movie!  This cast has what it takes and shines throughout the film.  Davis is masterful as the strong leader of this resilient group of women and Rodriguez and Debicki match her in every scene.  Debicki is a surprising delight and creates a memorable role here.  Erivo also is strong and seamlessly joins these women.  Farell and Henry are terrific as well and Neeson plays the familiar role nicely.  This is a strong cast that blends to create a memorable movie.

The 4K disc offers the viewer a real treat in terms of the video and audio.  The 2160p high definition video is clean and sharp with layers of rich colors throughout.  The Dolby Atmos audio is a terrific compliment to the video quality as sound effects are deep and dialogue is clear. The combo pack offers a 4K disc, a Blu-ray disc, a digital download and over fifty minutes of extras.  The latter includes three features entitled Plotting The Heist: The Story, Assembling The Crew: Production, and The Scene of the Crime: Locations.  These looks behind the scenes and interviews with cast and crew are insightful and interesting.

With a well-chosen cast telling the story, Widows has a lot going for it.  Unfortunately, things fall apart in the third act with the M. Night Shyamalan plot twists.  The audience definitely doesn't see the surprises coming but they lose some of their impact when they don't completely add up.  Things get a little confusing and the viewer has to suspend some belief to ignore the giant plot holes that arise.  Having said that, the film does take you on a great ride and entertains throughout.

As a "heist" film Widows delivers in spades and you couldn't go wrong watching it over and over again.

For more information about Widows visit the FlickDirect Movie Database. This release has been provided to FlickDirect for review purposes. For more reviews by Allison Rose please click here.