Alien helped redefine the Sci-Fi genre for a generation of moviegoers and became the bar that all other movies had to live up to or surpass. This latest edition won’t disappoint even the most diehard of Alien fans and is worth getting. 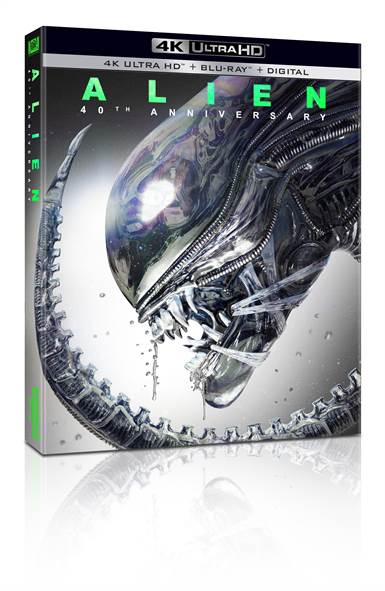 The year was 1979.  The director was a mostly unknown individual named Ridley Scott (Blade Runner).  The film, that changed the future look and ideas of what creatures should look and act like, was called Alien.  The movie became a huge hit and made both Scott and the film's star, Sigourney Weaver (Avatar), household names.  It also scared the daylights out of people in the same way that Jaws did four years earlier.  It spawned several sequels and even saw a crossover with the movie Alien vs. Predator.  As we get set to celebrate "Alien Day" and the 40th anniversary of the film's release, Twentieth Century Fox is releasing the movie on 4K for the first time.

The crew of the space merchant vessel, Nostromo, are awakened in their sleep pods by the ship's computer, MU-TH-UR (Helen Horton; Superman III) who has detected a distress signal from a nearby moon.  Upon investigation, they find a damaged alien spaceship and chamber filled with hundreds of egg-like orbs. When one of the orbs breaks open and attacks crewmember Kane (John Hurt; Hellboy), the other members of the team bring him back to the ship to try to help him.

The alien, however, has attached to his face and they are unable to remove it until later when it lets go and dies.  Seemingly unharmed the crew sits down for one last meal before returning to earth.  Suddenly, Kane starts convulsing and a small alien bursts from his chest and escapes.  The crew attempt to capture the alien who they realize is using the air ducts to move around the ship.   One by one, they all end up dead as the alien grows and only Warrant Officer Ripley (Weaver) is left.  Realizing she cannot kill the being, she tries to escape and blow up the ship.  Unfortunately, the Alien hides aboard her escape pod as they travel back to earth.

Looking back at the film now it is distinctly Scott's work but at the time it was a fresh voice in the world of filmmaking.  With claustrophobic angles and dark, smoky rooms, Scott's unique vision permeates this film. He also assembled a strong cast and made an excellent choice with Weaver.  Her Ripley is an iconic symbol of a strong female who takes charge, kicks butt, and takes names later.  Tom Skerritt (Top Gun),   Hurt, Veronica Cartwright (Scary Movie 2),  Ian Holm (The Lord of the Rings: The Fellowship of the Ring), Yaphet Kotto (Homicide: Life on the Street) and Harry Dean Stanton (The Green Mile) all bring their A-game to every scene.

I'm sure at this point you may be wondering if you really need this movie in 4K considering it was made 40 years ago and honestly, how good could the picture quality be?  The answer is VERY good.  Details are in sharp focus and there is very little grain.  Interestingly, the additional scenes on the 2003 Director's cut were not transferred to 4K so there is a slight difference in the quality in those moments.  The DTS-HD Master Audio 5.1 is solid but not exceptional but the video quality really makes up for that oversight.  The extras are the same found on the 2010 Blu-ray release so nothing new there either.  They include: 2003 Audio Commentary by Ridley Scott, Cast & Crew, 1999 Audio Commentary by Ridley Scott, Final Theatrical Isolated Score, Composer's Original Isolated Score, and Deleted Scenes Footage Marker.

Alien helped redefine the Sci-Fi genre for a generation of moviegoers and became the bar that all other movies had to live up to or surpass. While technology has allowed for advances in filmmaking and things keep getting bigger and better, this movie is a classic that stands the test of time.  This latest edition won't disappoint even the most diehard of Alien fans and is worth getting.

Download Alien in Digital HD/4K from the iTunes store.

Listen to the Alien soundtrack on Apple Music.

For more information about Alien visit the FlickDirect Movie Database. This release has been provided to FlickDirect for review purposes. For more reviews by Allison Rose please click here.