Regardless of whether or not this is not your favorite Batman film, the technical brilliance is hard to deny.  One watching and you will be hooked. 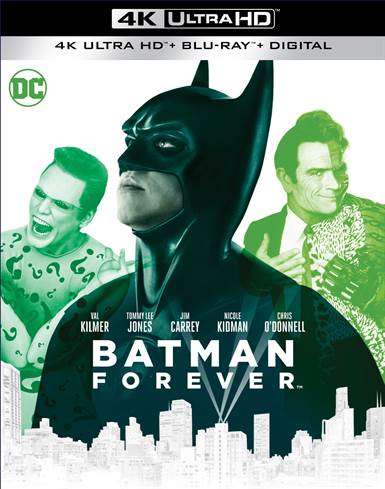 Purchase   DVD/Blu-ray/4K UHD
After the rebooted 1989 and 1992, Tim Burton-helmed Batman and Batman Returns, Director Joel Schumacher (Phone Booth) took over in 1995 with Batman Forever.  The film, which also saw the departure of Michael Keaton (Spotlight) in favor of Val Kilmer (Top Gun) as the Caped Crusader, was one of the top-grossing movies of the year.  It solidified the 1990's era of Batman and continued his saga with familiar villains on hand.  This third installment definitely was a little more lighthearted than the previous two films and the comparison can easily be made when buying the "Bat" pack on 4K, available in stores today.

As the movie opens we see Batman battling a new threat – Two-faced (Tommy Lee Jones; The Fugitive) – who is the alter ego of former District Attorney Harvey Dent.  Dent has taken a hostage as he robs a bank but Batman thwarts his attempt and once again saves the day.  Meanwhile, Bruce Wayne has to deal with an employee – Edward Nygma (Jim Carrey; Dumb and Dumber) - has an idea for beaming television signals directly into one's brain.  Bruce, however, thinks it is too dangerous fearing it could be used for mind manipulation and rejects the idea of making Nygma hostile and crazy.

Lurking in the shadows and licking his emotional wounds, Nygma transforms into the Joker after sending Wayne a series a set of cryptic messages.  He also uses his technology to read people's minds, including Bruce's and discovers Wayne's secret identity.  He takes this information to Two-Faced and the duo team up to destroy Batman who has taken an orphaned circus performer, Dick Grayson (Chris O'Donnell; Scent of a Woman) under his wing.   Ultimately, Two-Faced and Joker's ego gets the better of them and plays a part in their downfall while Grayson officially becomes Batman's sidekick – Robin.

Kilmer, unfortunately, didn't have the same magic as Keaton so his portrayal of the Dark Knight isn't as strong and the obvious comparisons were made when the film ran in theaters.  Jones and Carrey, however, are both strong as the devious duo who plot against him.  Nicole Kidman (The Hours) also does a good job as Dr. Chase Meridian, Bruce's love interest who also happens to be attracted to the man in the bat suit.  Schumacher's take on the story, however, was probably the most disappointing as fans had grown used to a darker theme and he tried to lighten things up, which was not received well by fans.

The addition of the upgraded technology has truly enhanced all of the films in this series but Batman Forever stands out among the crowd.  The 2160p high definition video quality is exceptional in this transfer and everything from the detail in the leather on Batman's cape to the disfigurement of Two-faced is sharp and clean.  The Dolby Atmos audio is also a treat and compliments the video beautifully.  Technically this transfer is the full package.  The combo pack comes with previously released extras including: Audio Commentary by Director Joel Schumacher, Riddle Me This: Why is Batman Forever?, Shadows of the Bat: The Cinematic Saga of the Dark Knight Pt. 5-Reinventing a Hero, Batman Forever: The Heroes, Batman Forever: The Villains, Beyond Batman, Deleted Scenes, Music Video "Kiss From a Rose" by Seal, and the Theatrical Trailer.

While many feel this film was the beginning of the downfall for this reboot, it does have some interesting aspects to offer like the introduction of Dick Grayson/Robin and two well-cast villains.  Regardless of whether or not this is not your favorite Batman film, the technical brilliance is hard to deny.  One watching and you will be hooked.

Download Batman Forever in Digital HD/4K from the iTunes store.

Listen to the Batman Forever soundtrack on Apple Music.

For more information about Batman Forever visit the FlickDirect Movie Database. This release has been provided to FlickDirect for review purposes. For more reviews by Allison Rose please click here.