Director Tony Scott brought some incredible shots to the film, mounting cameras everywhere on the fighter jets to achieve amazing footage while giving the audience the feeling they were flying right alongside Maverick. 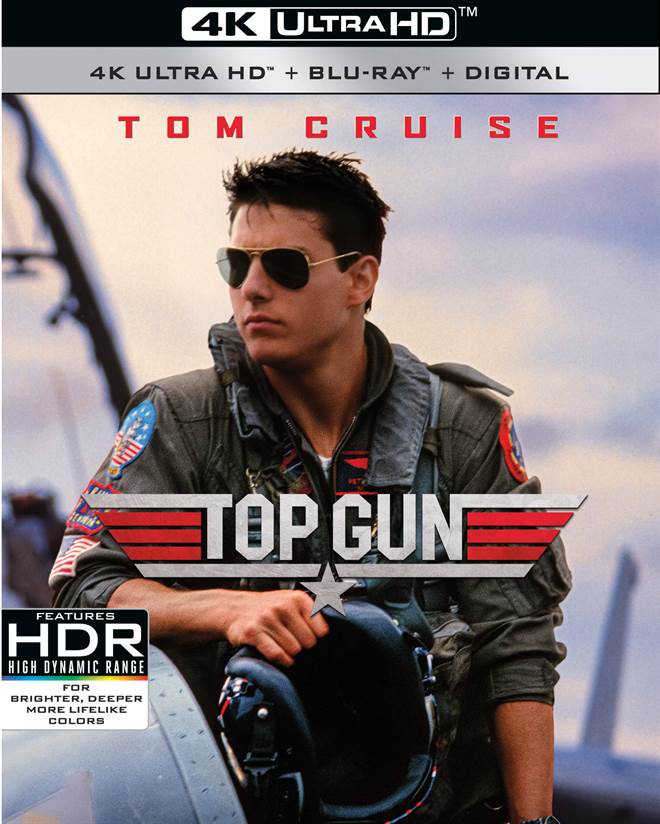 If Top Gun was released on May 16, 1986, then why is Top Gun Day celebrated on May 13th?  And what exactly is Top Gun day? Well, the answer to the first question is because the organizers of the first Top Gun day made a mistake and the answer to the second question is Top Gun day is similar to Talk Like a Pirate day where people go around quoting the film and celebrating the movie that made almost every young man want to join the Navy and become an aviator.  In the spirit of this fictitious holiday, Paramount Pictures is releasing the movie on 4K UHD on May 19, 2020.

Pete "Maverick" Mitchell (Tom Cruise; Mission: Impossible series) is one heck of a fighter pilot who unfortunately has a chip on his shoulder and seems to always have something to prove.  His father was killed in combat under mysterious circumstances and Maverick has spent his life trying to dodge the reputation of his father's ghost.  While it has made him try harder than other pilots, it also made him show off his skills by flying recklessly and disobeying orders.

When Maverick and his co-pilot, Nick "Goose" Bradshaw (Anthony Edwards; ER), are offered the opportunity to attend TOPGUN, the Naval Fighter Weapons School, his cockiness continually gets him in trouble.  It also gets him noticed by one of the civilian instructors, Charlotte "Charlie" Blackwood (Kelly McGillis; Witness) who wants to learn more about his interaction with an enemy aircraft while on maneuvers.  When the two start a romantic relationship, it complicates her position and his training.  While Maverick and Goose don't end up winning the Top Gun trophy, Maverick learns to reconcile his feelings about his father to become a better pilot.

Top Gun became a surprise hit grossing over 350 million dollars worldwide on a 15 million dollar budget.  It also became one of the best-recruiting tools the Navy ever had.  Tom Cruise, who had already seen box office success in The Outsiders and Risky Business, became an A list star whose achievements just keep growing over thirty years later.  McGillis, Edwards and Meg Ryan (Sleepless in Seattle) were all perfect in their supporting roles but Val Kilmer (Real Genius), as Maverick's nemesis, "Iceman",  stands out amongst the group going head to head with Cruise.

Director Tony Scott (True Romance) brought some incredible shots to the film, mounting cameras everywhere on the fighter jets to achieve amazing footage while giving the audience the feeling they were flying right alongside Maverick, Goose, Iceman and the others.  The outcome  was exhilarating shots that showed off these multi-million dollar machines.  His close up views of Cruise during Maverick's introspective moments helps the viewer understand some of what he was thinking and feeling.  Scott's pacing was excellent and his vision was clear.  He was the right person to direct Top Gun and part of the reason it became so successful in theaters.

The 4K resolution and HDR Dolby Vision enhance the viewing quality of the original film.  There are a few moments, especially at the beginning of the film, that doesn't seem all that different but during the flying scenes and with many of the outdoor shots, the uptick in quality is visible.  Of course, the video cannot compare to the Dolby Atmos audio, which is top-notch. Everything from the jet engines, to the dialogue and the now-famous soundtrack, is equally strong and crisp.  There are two new extras included on the 4K disc while previously released extras are housed on the Blu-ray disc.  The extras include: NEW! The Legacy of Top Gun, NEW! On Your Six - Thirty Years of Top Gun  (Looking Back, America's Best, Into the Danger Zone, Going Ballistic, Narrow Targets and the Future), previously released: Danger Zone: The Making of Top Gun, Multi-Angle Storyboards, Best of the Best: Inside the Real Top Gun, Music Videos, Original Theatrical Promotional Material, and Audio Commentary.

While not critically acclaimed, Top Gun was a box office success and has become a "new classic".  With lots of quotable lines, the script was at worst cheesy and at best almost poetic.  Watching the film over 30 years later still gets one's heart pumping and has the audience humming the now-iconic soundtrack.

Remember to celebrate Top Gun Day on May 13th, while we all anxiously await the sequel, due out in theaters this December.

For more information about Top Gun visit the FlickDirect Movie Database. This release has been provided to FlickDirect for review purposes. For more reviews by Allison Rose please click here.