Home / Reviews / Prey For The Devil

Offering a little twist on the typical exorcist movie, Prey for the Devil combines jump scares with hypotheses on possession and exorcism... 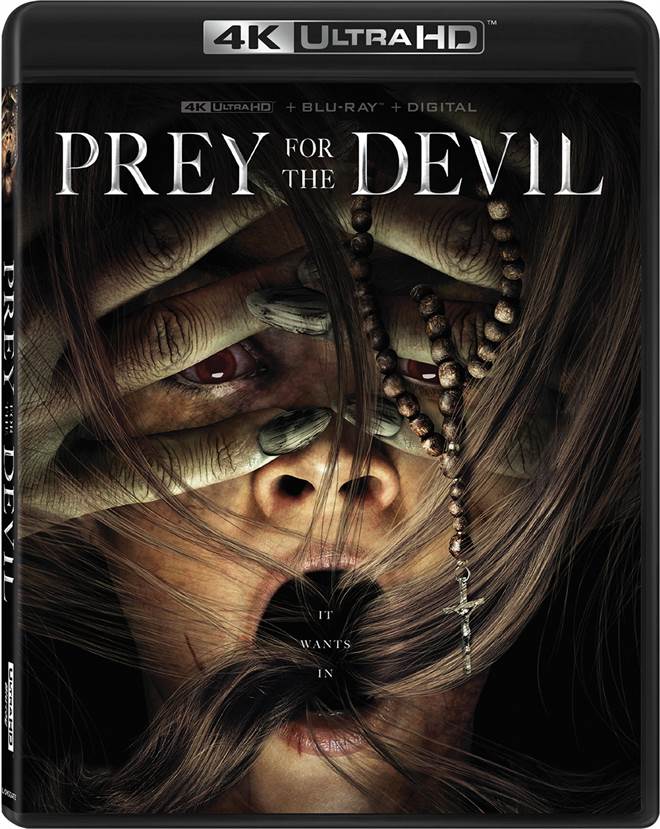 The practice of exorcism has been practiced for centuries in various forms, usually in the name of religion.   It has long been believed that people often displayed unusual or disturbing behavior because they were possessed by demons or the devil.  The thought was that the devil possessed the human causing them to display erratic beliefs or behaviors and the only way to "cure" them was to perform rituals to force the devil to exit their body.  With that type of subject matter including the devil inhabiting a human, it is no wonder that there have been numerous films, most of them within the horror genre, created to entice audiences to theaters.

The latest offering in the horror sub-genre was 2022's surprise - Prey for the Devil. Distributed by Lionsgate, the film managed to gross $43 million worldwide, despite negative reviews from critics.  Six weeks later the movie was on Video on Demand, before being released this week on 4K, Blu-ray, and DVD.

Sister Ann (Jacqueline Byers; Salvation) is assigned to one of the many recently added institutions intent on training priests in the art of exorcism. Feeling a particularly strong connection to a young patient named Natalie (newcomer Posy Taylor), Ann starts hearing voices and having flashbacks to her youth when her own mother was possessed.  As Natalie gets worse, Ann joins the Priests in training, determined to help Natalie get free from the demon inside her.  Making startling discoveries regarding herself, Natalie, and other victims, Ann thinks she has found a way to cast the devil out of the poor, innocent, weak souls.

Though Byers and Taylor are somewhat unknown, audiences will recognize some of the other cast members.  Among them are Virginia Madsen (Alien), Colin Salmon (Resident Evil), Ben Cross (Chariots of Fire) in his last performance before passing away, and Christian Navarro (13 Reasons Why). While Madsen's character is there to explain patients' unusual behavior as mental illness, she is willing to listen to Ann's stories regarding her mother's possession.  Through her first role, Taylor shows early signs of being very talented and it will be interesting to see what she does next.

Presented in 2160p resolution with a 2.39:1 aspect ratio, the video quality is fairly strong.  Most of the film has a slight yellow "tinge" to it but still manages to offer some detailed visuals.  Even the darker scenes are lit in such a way as to be able to clearly ascertain the set designs surrounding the actors.  The CGI is well done for the most part but there are a few moments that don't seem authentic causing the viewer a little bit of a distraction from the story.

Conversely, The Dolby Atmos audio is extremely well balanced even when utilizing many of the clichéd tropes employed by horror films.  The ominous soundtrack is balanced between all surround speakers and ambient noises come at the viewer from all angles. The audio can be a make or break aspect of a home entertainment release and luckily Prey for the Devil has the right mix.

There are approximately three hours of extras offered in the combo pack and the same extras can be found on the 4K disc, Blu-ray disc, and Digital HD versions. They include: Audio Commentary with Director Daniel Stamm and Actress Jacqueline Byers, Possessed: Creating Prey for the Devil, A Lullaby of Terror, The Devil's Tricks: Visual Effects, Prey for the Devil Cast-Read: The Original First-Draft Screenplay, and Speak No Evil: A Real Exorcist and Church Psychologist Discuss Possession.

Offering a little twist on the typical exorcist movie, Prey for the Devil combines jump scares with hypotheses on possession and exorcism, making it more interesting and unusual than the simply "driving the Devil out" plots of similarly themed films.

Your first hint...look at the title of the movie for a clue of what makes it a little different.

For more information about Prey For The Devil visit the FlickDirect Movie Database. This release has been provided to FlickDirect for review purposes. For more reviews by Allison Rose please click here.

Prey For The Devil images are © Lionsgate. All Rights Reserved.