For a number of years now, Warner Bros. has had some of the best looking and sounding television seasons on the market and Supernatural Season 11 is no exception. 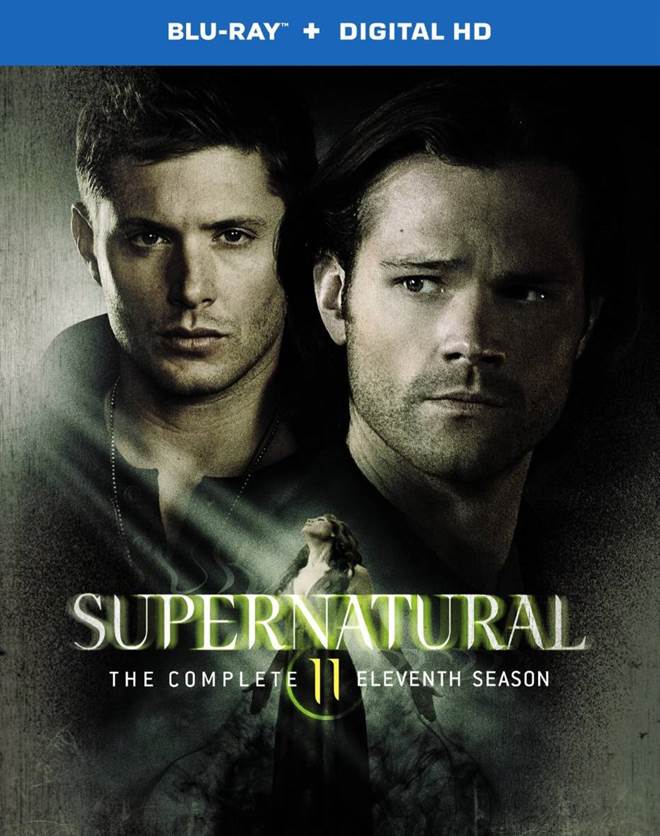 Purchase   DVD/Blu-ray/4K UHD
It's starting to look a lot like fall. The air is getting cooler, the leaves will change color soon, kids are going back to school, and it is another year that Supernatural graces audiences with a Blu-ray combo pack full of last year's on-screen antics of the Winchester boys saving the world from another apocalypse.

Last time we checked in with Sam (Jared Padalecki) and Dean (Jensen Ackles) Winchester, the boys had just removed the Mark of Cain from the arm of Dean and had unleashed God's sister, "The Darkness", upon the world. It is when this darkness, Amara (Emily Swallow), threatens to take over all of creation that Sam and Dean team up with their old cohorts Castiel (Misha Collins), The King of Hell Crowley (Mark Sheppard) and Crowley's witch-mother (Rowena (Ruth Connell), to fight Amara and save the universe from total destruction.

After a having some very uneven seasons since show creator Eric Kripke left the series after season five, Supernatural has been slowly getting back to it's roots for the past few years, and this past year's Supernatural finally had a season that is worthy of it's heyday.  The plot is strong and compelling. The Darkness provides a worthy advisory for Sam, Dean, and friends. The overall story arc still allows for some "stand-alone" episodes that fit into the overall mythology, and old friends such as God (Rob Benedict) and Lucifer (Mark Pellegrino) are back in the mix.

Jared and Jensen were born to play their respective roles on the show, and every year it is a delight and treat seeing them back as their alter-egos, Sam and Dean. Warner Bros. and The CW have said they will keep Supernatural going as long as the pair want and I tend to agree. The rest of the supporting cast does a superb job, in their roles as well. Each episode is filled with the humor, wit, suspense, and action that we all have come to associate with Supernatural. Even in it's eleventh season, the producers have not skimmed on it's production value and the show still looks better than most feature-length films. It is because of all these factors Supernatural continues to be such a great success and fun time to watch at home.

For a number of years now, Warner Bros. has had some of the best looking and sounding television seasons on the market and Supernatural Season 11 is no exception. Encoded in 1080p AVC coded with a  1.78:1 the show has never looked better. The muted color palette is crystal clear with blacks that are spot on. At no time is their any aliasing or artifacting on the disc. While, unfortunately, the classic rock soundtrack of Supernatural looks buried and gone for good, the audio still pops on the disc. Presented in DTS-HD Master 5.1, the dialog is crisp and clear while the special effects make great use of your surround speakers.

As usual, Supernatural Season 11 includes an Ultraviolet HD copy of the series so you can take "the boys" with you on the road. Also included in the set is a behind-the-scenes look at Jensen Ackles directing the episode, "Bad Seed", "On Set with SPN: The Real Fan Contest", a documentary of two Supernatural fans visiting the show's set. A look into the mythology and the creation of the character Amara in "The Winchester Mythology: Shedding a Light on The Darkness". A look at the special effects, unaired scenes, a gag reel, and last but not least the entire panel from San Diego comic con 2015.

During various talks that FlickDirect has had with the cast, the producers of the show have all alluded to the fact that Supernatural is going back to it's original roots more in season twelve than ever before. If season eleven is any indication of this, than all I can say is, bring it! If Supernatural keeps up this way, I have no issue seeing Sam and Dean:The Geriatric years later on in life.