Fans of Supernatural have practically grown up with the Winchester Brothers and have watched the actors age and mature over the last fifteen years. 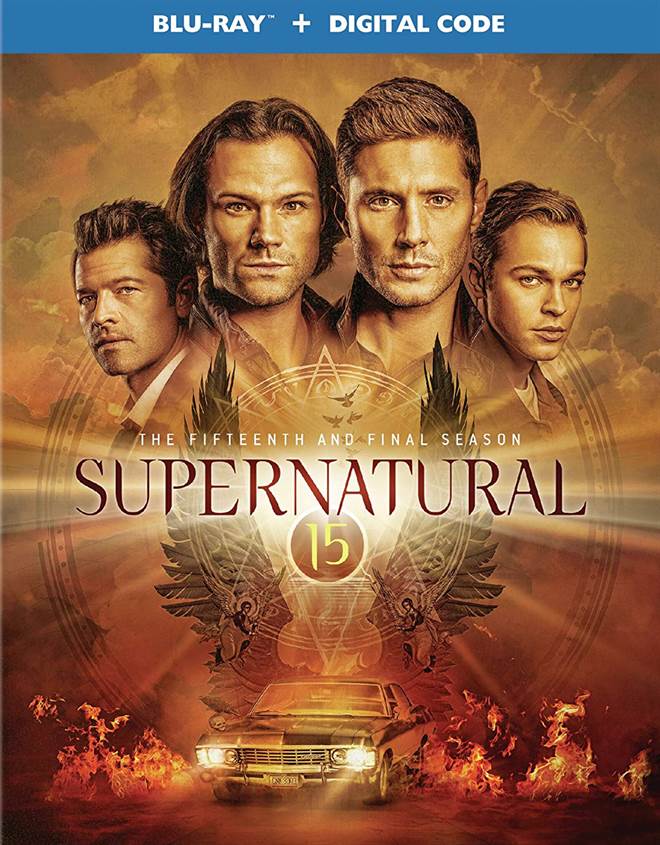 Carry on my wayward son, there'll be peace when you are done…so begins the song by Kansas that has become associated with the WB/CW television show, Supernatural.  Those lyrics perfectly reflect the idea and premise of the show that has entertained audiences for fifteen seasons.  After three hundred and twenty-seven episodes, the Winchester Brothers, Sam (Jared Padalecki; House of Wax) and Dean (Jensen Ackles; Smallville), have hung up their demon-hunting tools but not before the boys have their last adventures.  Supernatural: The Fifteenth and Final Season Blu-ray is available in stores now, but the real question is…are you ready to say goodbye?

The set includes all twenty episodes – the good, the bad, and the ugly. The writing is sometimes uneven and, of course, the COVID pandemic cut into the filming schedule, which made for a somewhat choppy and awkward ending.  I'm sure this is not how the cast and crew hoped the series would conclude but they made the best of an unusual situation.  While Padalecki and Ackles seem to bring a freshness to Sam and Dean, they aren't the focus of a few episodes this season, and while variety is always a good thing, they seem to get lost sometimes.  Whether it is intentional or not, there is understandably a heaviness to this season giving it extra gravitas.

It is easy to see how technology has changed in the last fifteen years and Supernatural is a perfect example of this evolution.  While earlier seasons have good video quality, the last few have had a sharpness that the beginning seasons lacked.  Of course, this last season takes advantage of the advances offering excellent resolution and a deep color palette.  Occasionally, there is a slight graininess but not enough to be annoying or distracting.

The DTS-HD Master Audio 5.1 is a beautiful compliment to the video quality.  The lossless track makes complete use of the surround sound speakers.  The ambient noise envelopes the user fully and the dialogue is crisp enhancing the viewing experience.  The lower register adds a level of depth and robustness.  The action scenes vibrate with intensity reaching one's core down to the bone.

Supernatural Blu-ray sets never disappoint where extras are concerned and Season Fifteen is no exception.  The combo pack has a digital HD code and a four-disc set with most of the extras housed on the last disc. The extras include Deleted Scenes (spread out over all four discs), Supernatural – The End of the Road, Supernatural – Family Don't End With Blood, The Winchester Mythology – Midwestern Heroes, Supernatural – The Long Road Home, Gag Reel, Supernatural – 2019 Comic-Con Panel, and Winning Baby – A Supernatural Giveaway.  While watching the extras is an enjoyable experience, this go around one can't help but feel a sense of melancholy, knowing this is the last group of extras, the last Comic-Con panel, the last gag reel (you get the point), etc.

Fans of Supernatural have practically grown up with the Winchester Brothers and have watched the actors age and mature over the last fifteen years.  We've seen characters come and go and watched as even Castiel (Misha Collins; Girl, Interrupted) changed throughout the years.

Supernatural and the fans took Comic-Con by storm year after year and the international event won't be the same without them.  Having said that, this last season should have bigger and better than before.  While it started out headed in that trajectory, thanks to a worldwide pandemic, the season ended a bit more sedately than it might otherwise have if the shooting schedule had been finished before being shut down.

If you own the other fourteen Seasons on Blu-ray, grab Supernatural: The Fifteenth and Final Season to complete your set.  If you don't own any of them, splurge on Supernatural: The Complete Series Blu-ray.  You won't regret either option.

For more information about Supernatural visit the FlickDirect Movie Database. This release has been provided to FlickDirect for review purposes. For more reviews by Allison Rose please click here.