As the fourth film in the Hotel Transylvania series, Transformania continues to keep its foundation rooted in the first movie. 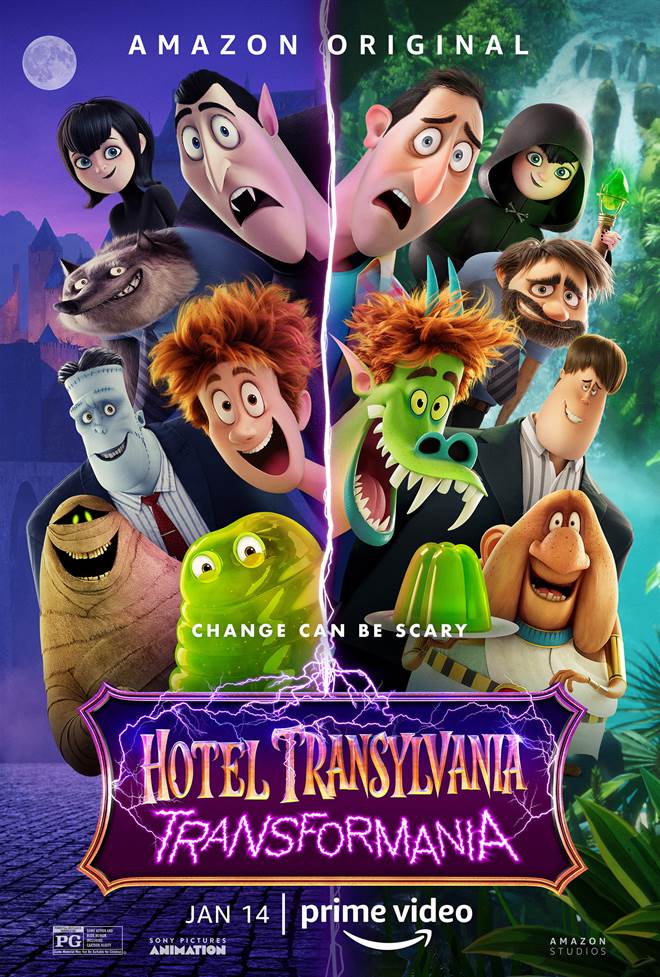 Animated movies always tend to be popular for two reasons.  One, it will keep the younger children busy for about two hours while offering parents a sigh of relief, and two, the kids tend to love them, from cute characters to catchy songs and, generally, a couple of laughs thrown in.  Ten years ago, Sony Pictures Animation gave us their newest (kid-friendly) movie called Hotel Transylvania.   The premise was about a hotel for monsters owned by Dracula (Brian Hull; Tangled: The Series - Adam Sandler in the first 3 movies) and his daughter Mavis (Selena Gomez; Monte Carlo). Ten years and three sequels later, Hotel Transylvania: Transformania was released on Amazon Prime Video this week.

As the celebration begins on the 125th anniversary of Hotel Transylvania, Dracula gets ready to make a huge announcement. With her sonic hearing, Mavis overhears him saying that he plans to retire and leave the hotel to her.  Excited, she tells the news to her husband, Johnny (Andy Samberg; Brooklyn Nine-Nine), who freaks out and can't keep the news to himself.  He runs to his father-in-law to thank him, but Dracula makes up some "monster real estate law" stating humans can't own monster real estate. Crushed, Johnny enlists the help of Dr. Van Helsing (Jim Gaffigan; Chappaquiddick) to turn him into a monster.

Some of the original voice talent returns for this fourth installment, however, Adam Sandler, as Johnny is replaced by Sandberg.   Luckily, both men easily portray the nerdy, nervous, awkward human being who falls in love and marries a vampire.  Gomez once again reprises her role as Mavis and her sweet demeanor mixed with sarcasm is the perfect fit to give Mavis a beautiful, slightly mischievous personality, who can let most things roll off her back.

As we have come to expect from this franchise, the animation is clean and fresh, and the dialogue is funny with some witty lines. Writers Amos Vernon (Night of Too Many Stars), Nunzio Randazzo (Future Husbands), and Genny Tartokovsky (Primal) had to balance humor and biting sarcasm while still maintaining cohesiveness throughout the series of films.  Directors Derek Drymon (CatDog) and Jennifer Kluska (Bee Movie) manage to create a well-paced, heartwarming story out of unoriginal material.

Sadly, the idea of switching bodies from one entity to another has been done time and time again and the moral of "stepping into someone else's shoes and seeing them from a different perspective" is somewhat cliché and, as I said above, is not an original or unique concept.  However, weaving the hotel's anniversary and Dracula's retirement into the story affords them the ability to weave other monsters into the movie and to be able to give the film an upbeat and happy feel with lots of colors exploding onscreen.  Drymon and Kluska make the most of their talented voice actors bringing out their fun side while not making the movie too goofy or silly.  It is also very cute how we were able to witness the more human side of the monsters.

As the fourth film in the Hotel Transylvania series, Transformania continues to keep its foundation rooted in the first movie but let's face it, none of this franchise is going to be Oscar-nominated.  However, that isn't always the point or purpose, as people tend to be looking for family-friendly entertainment (especially for their kids).

Hotel Transylvania: Transformania isn't great but isn't all that bad either.  With a strong cast, decent writing, and a solid foundation to build upon, it doesn't make waves with the previously established movies but, rather, it is a complement to them.  If you are tired of sequels being very poor imitations of the first movie in the series, then you will be a little surprised by the Hotel Transylvania: Transformania.  Take it from me, Skip the trip to the theater this week and cozy up on the couch with the whole family up, some popcorn, and your Amazon Prime video account.