Home / Reviews / The Mummy: Tomb of the Dragon Emperor

The Mummy: Tomb of the Dragon Emperor Theatrical Review 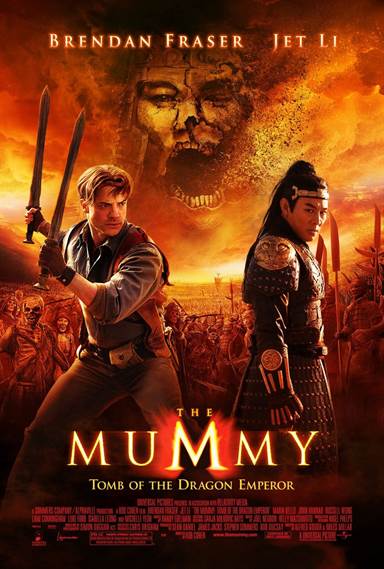 Purchase  DVD/Blu-ray/4K UHD
What's the opposite of 'Synergy' where things are more than the sum of their parts? The answer is "antagonism" where additive elements actually detract from the whole. This is the force at work in the third Mummy franchise with Brendan Frasier reprising his role as Rick O'Connell, archaeologist, adventurer, and mummy-hunter.

The first two movies were quite good (with number one reaching excellent). Even the ride at Universal Studios is one of the best--notable for having a pre-ride story based on the characters as actual actors making another Mummy movie and there being an actual for-real curse on the set. The quality runs deep in the first two movies of the franchise and I had decently high hopes for the third which moved from Egypt to China (which seemed reasonable to me) and looked like it reprized a good deal of the action but added Jet Li (the go-to guy for Asian warlords it now seems).

Alas, what was produced, although structured like a Mummy movie and starring the leading man, fails along a number of spectra to live up to the first two. The main problem? Chemistry. Rachel Weisz's character Evelyn O’Connell is still in the movie--but the actress is Maria Bello who Fraser just has no chemistry with. Apparently problems with the script (either travel to China--Weisz is now a mother--or just the, er, script itself didn't work for her) caused the original actress to bow out.

Although this is time honored--the iconic case of switching out leading ladies being, perhaps, Austin Powers where the love interest of the first movie is dismissed as a "Fem-Bot" in the opening of the second--audiences expect more today. Maybe we're spoiled by shows like the Lord of the Rings--but whatever the case, if they're going to change actresses, they need to get someone who works better.

Also lacking in chemistry is Fraser's movie-son Alex O'Connell played by Luke Ford. One of the audience members declared that he looked like a "little punk trying to seem cool" in the opening scenes--I'm not sure I'm that harsh on him--but he also was an actor with the pre-requisite charisma and no spark between the characters.

While having the chemistry not-quite-gel might not seem so fatal for an action film, for Tomb this is especially damning: the producers have set up a third movie that is supposed to pass the torch to the younger Ford as Fraser has completed his three-movie deal. This gives it a structure very similar to the last Indiana Jones movie: the young son is now becoming an adventurer in his own right and the movie must include family bonding scenes to move the interest from the now-happy family to the single and freer son.

Without chemistry this is painful to watch and there's enough of it threaded through the film that you can't get away from it. The action itself--and all the Asian parts--comes together pretty well. Sure, people didn't like the yetis--okay, maybe the Terra Cotta army does look a little like chocolate--but over all it's not too bad. The Mummy movies were never really avaunt guard cinema in the first place.

It's unfortunate that the movie didn't come together better: the fourth Indie movie wasn't the high-point of the series and it seems as though with the Mummy franchise moving out of the traditional 20's and 30's pulp era that we're leaving that genre behind for more cold-war adventure stories (although the 50's being, now, more than half-a-century in the past, makes them, I guess timely for romanticizing).

Still, for all the effort they put into this, I'd loved to have seen a little more energy. Even Fraser, who I like, seems to be phoning in his lines to a degree and I have to wonder if the actors were looking around at the green-screens they were clearly surrounded with going "I hope they clean all this up in post-production!"

Purchase a DVD/Blu-ray/4K UHD physical copy of The Mummy: Tomb of the Dragon Emperor today at Amazon.com

Download The Mummy: Tomb of the Dragon Emperor in Digital HD/4K from the iTunes store.

For more information about The Mummy: Tomb of the Dragon Emperor visit the FlickDirect Movie Database.

Read More Reviews For The Mummy: Tomb of the Dragon Emperor