You’ll be engrossed for much of the film but in the end, you’ll probably walk out thinking, "what was all that build up for?" 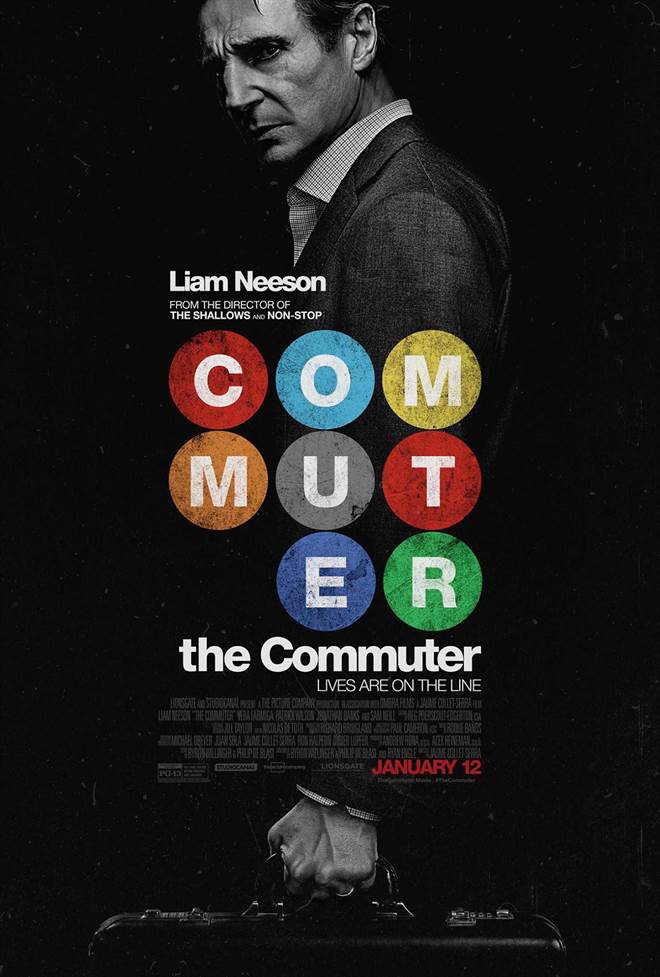 Millions of people everyday doing the same thing over and over again.  They leave their nice little homes in the suburbs, get on a train into Manhattan, go to work in some high rise building all day, get back on the train, and head home back to the suburbs.  Nothing much changes from one day to the next and nothing exciting ever really happens.  Ten years of the same old, same old and Michael MacCauley (Liam Neeson; Taken) is a part of that grind.  It's rather redundant until one day when it isn't.  That day his world changes forever.

MacCauley is an ex-cop who sells life insurance and commutes on the Metro-North line from Westchester County New York into Manhattan.  He has a wife and a teenage son heading off to college in a few months and his life is pretty mundane and boring until one day when he gets fired.  Then he loses his phone and gets on the train home where he is approached by "Joanna" (Vera Farmiga; Bates Motel) who poses a not so hypothetical question – what if you did one little thing that would have an impact someone on the train but you would have no idea how".

Once he takes the $25,000 hidden in the bathroom vent he is "all in".  He needed to find "Prin" – a day rider who had something in their bag that they had stolen.  When MacCauley realized there was something sinister going on he wanted out but Joanna's people threatened his family and there was no turning back.  He used all of his cop training to analyze and deduce and eventually learned not only who Prin was but how to save their life while keeping his family safe.

What starts out as an interesting script and a seemingly unique story gets convoluted and implausible the more it goes along.  A "whodunit" mystery that initially peaks the viewer's interest ends up with too many plot twists to have any semblance of anything based on reality.  It also becomes rather predictable which

is disappointing and the special effects were nothing special to write home about. It also drags onto long and in particular moment I had a flashback to the 1994 movie Speed (you'll know it when you see it).

Then there is the cast.  There was one point I fully expected for Neeson to speak into the phone and say, "I have a particular set of skills" Yes, that's right, we've seen some version this character before.  This is nothing new for him.  Farmiga was interesting though and different from her other roles.  The supporting cast is fine but without any real standouts.

I think some of the problems may have been Director Jaume Collet-Serra (The Shallows).  Like with some of his other films,  there are too many things that could go wrong and change the story drastically and the ending is rather anticlimactic and a bit of a letdown.

This one just didn't live up to my expectation of a Neeson film and I was disappointed.  You'll be engrossed for much of the film but in the end, you'll probably walk out thinking, "what was all that build up for?"

Purchase a DVD/Blu-ray/4K UHD physical copy of The Commuter today at Amazon.com

Download The Commuter in Digital HD/4K from the iTunes store.

For more information about The Commuter visit the FlickDirect Movie Database. This release has been provided to FlickDirect for review purposes. For more reviews by Allison Rose please click here.

The Commuter images are © Lionsgate. All Rights Reserved.

Read More Reviews For The Commuter