Even though Ritchie has less than two dozen directorial credits to his name, he is known for quality work and The Gentlemen surely won’t disappoint his diehard fans. 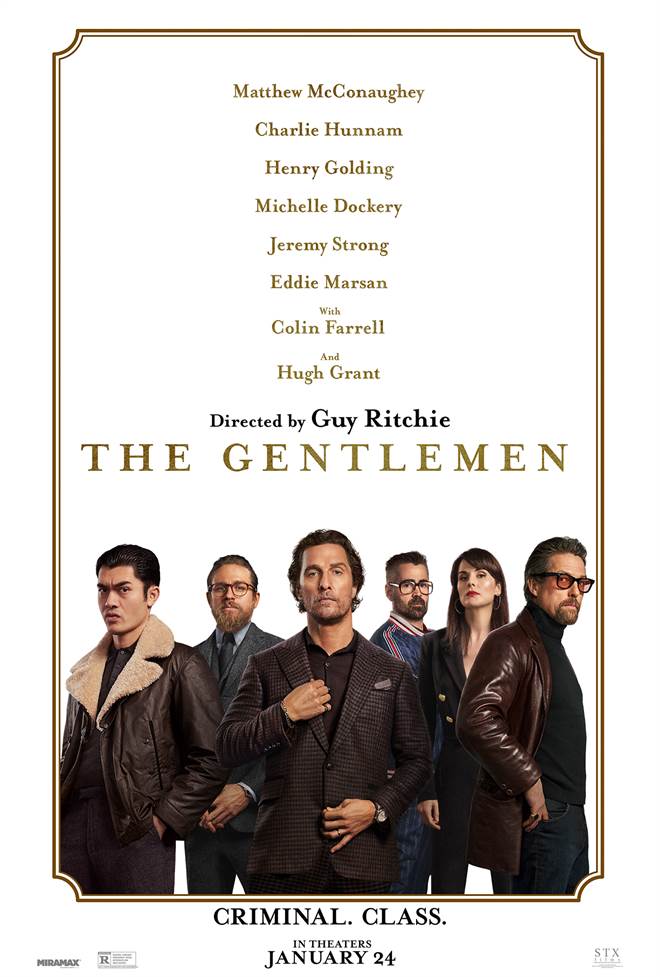 In 1998, a young director named Guy Ritchie quickly made a name for himself with his feature film debut, Lock, Stock, and Two Smoking Barrels.  Two years later he once again garnered praise for his sophomore effort, Snatch. Over twenty years later Ritchie's unique style is evident in every film he writes/directs.  From his slow-motion action sequences to his fast-paced, close-ups and the unexpected twists and turns of his scripts, Ritchie's flair for the dramatic is second to none.  Once again, he brings his panache for filmmaking to the big screen with this month's STX Films' release, The Gentlemen.

Mickey Pearson (Matthew McConaughey; Dallas Buyers Club) was smart but poor when he won a Rhodes scholarship to study at Oxford University in England.  While there he started selling marijuana to his classmates and, after dropping out of college, he built an empire.    Now, a very successful and wealthy man, Mickey has decided it's time to get out and sell his business.  Another entrepreneur, Matthew (Jeremey Strong; The Big Short), shows interest in Mickey's holdings but is eager to see how the operation works.  Meanwhile, Asian heir apparent, Dry Eye (Henry Golding; Crazy Rich Asians) approaches Mickey with an offer of his own which Mickey immediately dismisses.  Shortly thereafter one of Mickey's hidden compounds is broken into and the product is stolen causing Matthew to have doubts about buying the enterprise.

Around this time, Mickey's right-hand man, Ray (Charlie Hunnam; Sons of Anarchy), is visited by sleazy private investigator Fletcher (Hugh Grant; Love Actually) who weaves a tale of illegal activities, backstabbing and the downfall of Mickey's operation.  He tells Ray he has been hired to dig up dirt on Mickey in order for it to be published in the newspaper, effectively ruining Mickey.  Fletcher, being the altruistic soul that he is, offers to instead give Ray everything he has on Mickey for a large sum of money.  Ray, however, has a different idea.

The Gentlemen is a thinking movie that plays to the audience's intelligence so if you are looking for a lot of action sequences, with gunfire and explosions then this isn't the movie for you.  In fact, I want to see it again because, knowing what I know now, I'm sure there were details I missed the first time around.  At one point I thought I had figured out what was really going on only to be proven wrong by the end.  Ritchie keeps the audience on their toes weaving plots and storylines together like a well-knitted sweater and while he does this well, there are moments in the film that are a little slow (especially the beginning) so the pacing isn't as fluid as it could be.

One of the reasons this script is memorable is because of the actors who were cast to portray such a diverse group of characters.  Let's face it, much of the female audience will go to see the movie because of the good looking McConaughey, who plays Mickey as slick and refined but with a few rough edges from his less than stellar beginnings.  Grant is fantastic as the PI who will dance for the highest bidder.  Hunnam plays Ray calm and cool while Golding breaks his leading man persona making Dry Eye mean, ruthless and a little crazy.  Michelle Dockery (Downton Abbey) is also seen in a different light from what we are used to as Mickey's equally hard-working wife.  She can play with the "big boys" and she lets them know it at every turn. Rounding out this crew is Colin Farrell (In Bruges) as Coach, a hardworking, simple man who offers some normalcy and comic relief to an otherwise outrageous plot.

Even though Ritchie has less than two dozen directorial credits to his name, he is known for quality work and The Gentlemen surely won't disappoint his diehard fans.  It seems he has another bonafide hit on his hands.

For more information about The Gentlemen visit the FlickDirect Movie Database. For more reviews by Allison Rose please click here.

Alyn Darnay
If you're up for an exciting romp through London’s underworld with all its warts and gentlemanly slaughter showing, this is your film.
Full Review | Grade: A