There are so many adjectives one could use to describe Damien Chazelle’s Babylon; some good, some maybe not so good. 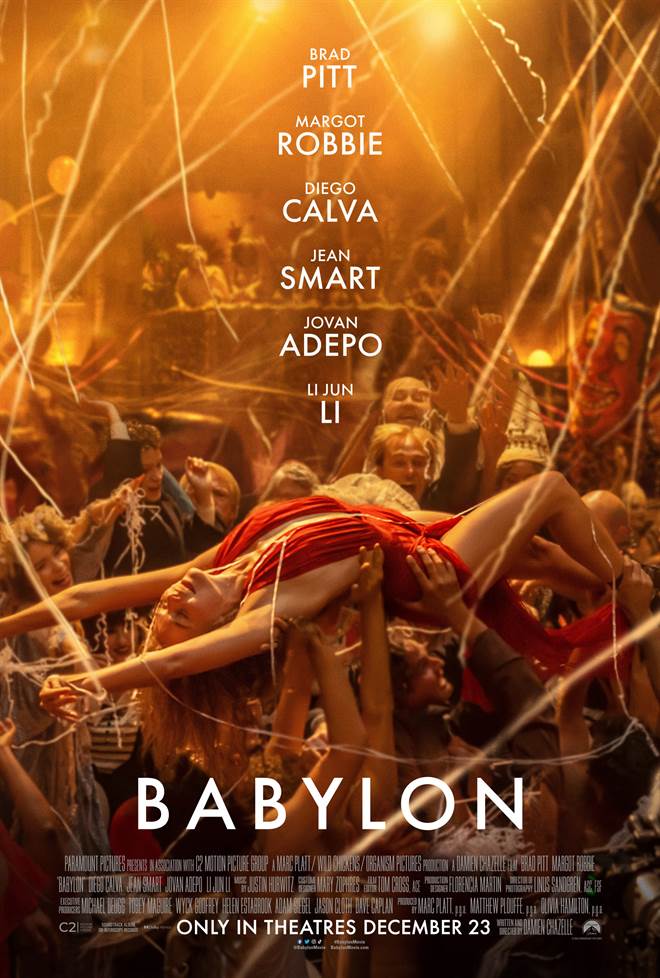 If you look up the meaning of Babylon in the Merriam-Webster dictionary on Google, this is what you will find: a city devoted to materialism and sensual pleasure.  Once you have watched Academy Award-winning Director, Damien Chazelle's (Whiplash) latest film, you will understand why he named the movie Babylon.  Set in 1920s Hollywood, the movie opens with an opulent party where booze - even though the country was in the middle of the prohibition era, - drugs and sex run rampant, and "talkies" hadn't yet debuted in movie houses.  However, over the next dozen or so years, things would change drastically as the movie industry became more cutthroat than ever before.

Manny Torres (Diego Calva; The Inmate) is a simple immigrant doing almost anything to earn a living while trying to break into movies.  One evening at a lavish Hollywood party, Manny meets party crasher and aspiring actress, Nellie LaRoy (Margot Robbie; Birds of Prey).  By the end of the evening, Nellie had a part as an extra on set and Manny somehow became Jack Conrad's (Brad Pitt; Bullet Train) personal assistant. With Manny, Nellie, and Jack on set, their lives become intertwined.  Manny becomes a studio executive, Nellie becomes a silent film star and Jack becomes an alcoholic and habitual monogamist.

Chazelle's vision has merit but it gets weighed down in the minutia and extemporaneous details. As these three individuals morph into other versions of themselves, the world around them changes and mutates and, unless they can keep up, it will leave them behind.  Conceptually, there is quite a bit to be learned from the plot but having to wade through the bushes to get to the point becomes tedious.  Chazelle would have done better if he expedited the events and edited the unnecessary parts.

Pitt has come into his own in the past few years and, while he has aged well, he is becoming known for more than just being a pretty face. His version of Conrad masks the pain hidden underneath the aging, silent actor's facade.  Robbie reinvents herself for every part she plays and her interpretation of Nellie is simply one more example of her talent.  Her hedonistic portrayal works perfectly as the dream-chasing actress.  Calva, perhaps, is the most "green" of all the actors but he manages to fit in well with them.  Manny's transformation over time from "errand boy" to confident, movie mogul comes through in Calva's mannerisms, posture, and vocabulary.  Scene stealer Jean Smart (The Accountant) commands attention each moment she is on screen.

Cinematographer Linus Sandgren and Music Director Justin Hurwitz (La La Land) beautifully enhance Babylon's overall feel with an upbeat soundtrack and incredible overhead shots that offer an all-encompassing visual.  Having worked with Chazelle on past projects the three filmmakers seem to share a similar vision with Chazelle expressing his desired effect and Sandgren and Hurwitz interpreting that desire into tangible pictures and sound.  Hurwitz especially uses the driving beat to emphasize the fast, chaotic pace of the movie.

There are so many adjectives one could use to describe Damien Chazelle's Babylon; some good, some maybe not so good.  The first few that come to mind include chaotic, impetuous, decadent, indulgent, opulent, hedonistic, etc.  However, short would never be a part of that list as the film is entirely too long. The audience is taken through a decade or so of time in the 1920s - 30s that feels like it takes about a decade of time.

Chazelle had a different and interesting concept that was executed fairly well for the most part but ended up overindulging the audience's patience.  While it is definitely worth seeing once, be prepared to sit through it.