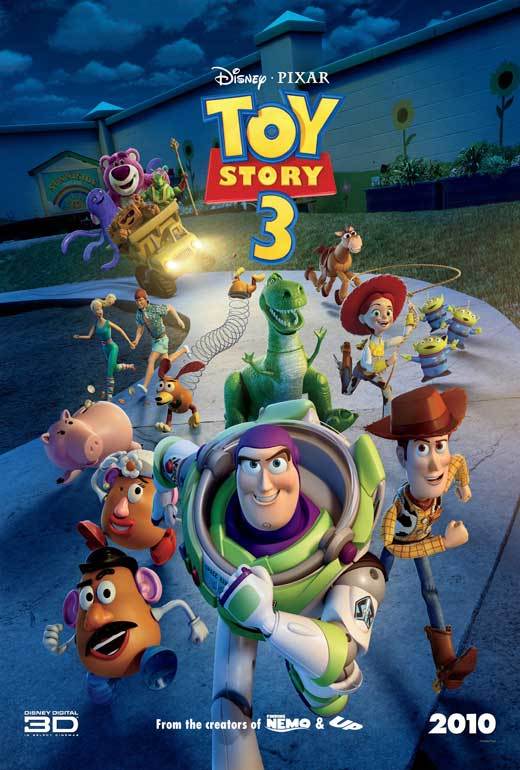 Purchase   DVD/Blu-ray/4K UHD
Demonstrating you cannot keep a good toy in the attic, Disney and Pixar are at it again with their summer animation film, Toy Story 3.

They are toys, they talk, at least when people aren't around, and they are back celebrating the return of the "Toy Story" franchise – but this time they are in Disney Digital 3-D!  "Toy Story", the film that started it all, takes moviegoers back to that fantastic, fun-filled journey, viewed mostly through the eyes of two rival toys -- Woody (voice of Tom Hanks), the lanky, likable cowboy, and Buzz Lightyear (voice of Tim Allen), the fearless space ranger.  The comically-mismatched duo eventually learn to put their differences aside when circumstances end up separating them from their owner, Andy; they find themselves on a hilarious, adventure-filled mission, where they can  only survive by forming an uneasy alliance.

Being the one on the FlickDirect team that does not see Toy Story as the "holy grail" of films, this is probably the most critical review you will find from any film historian/fan.

The Toy Story films remain among Pixar's weakest, but they still satisfy most filmgoers with lovable characters and a decent message.  Unfortunately, it appears that character development has not really occurred through the films, ironic given this film's themes about growing up.  These are still the same bland characters you saw at the beginning of the franchise.

The film starts out with Andy getting ready to go to College, and the toys are worried what will happen to them.  Through various mishaps, they all get sent to Sunnyside Day Care where everything seems perfect at first, until they realize Sunnyside is run by an evil band of Toys.

What happens next is the same basic plot of the two previous films as Woody, Buzz, and company try to get back home to Andy.

The end does provide a wonderful, tear-jerk moment, as you see how much Andy does care for his toys, and how wonderful it is to see pleasure through the eyes of a child.

For its target audience, Toy Story 3 is a perfect film providing a great third act for fans of the franchise.  However, if my granddaughter is any indication, Lotso, the strawberry smelling bear, sales might go down after this film.  However, if you found the Toy Story series as "just okay", or if Jessie, The Cowgirl, annoyed you in the second, be prepared for more of the same with this one.