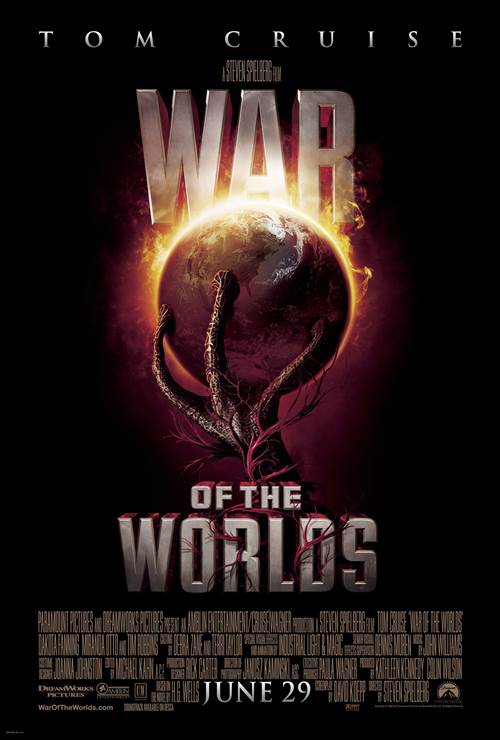 An ordinary man has to protect his children against alien invaders in this science fiction thriller, freely adapted from the classic story by H.G. Wells. Ray Ferrier (Tom Cruise) is a dockworker living in New Jersey, divorced from his first wife Mary Ann (Miranda Otto) and estranged from his two children Rachel and Robbie (Dakota Fanning and Justin Chatwin), of whom he has custody on weekends. On one such visitation, looking after the kids becomes a little more difficult when, after a series of strange lighting storms hit his neighborhood, Ray discovers that a fleet of death-ray robotic spaceships have emerged nearby, part of the first wave of an all-out alien invasion of the Earth. Transporting his children from New York to Boston in an attempt to find safety at Mary Ann's parents' house, Ray must learn to become the protector and provider he never was in marriage. Also starring Tim Robbins, War of the Worlds was directed by Steven Spielberg, who had been planning the project for years, but set it aside until a wave of "alien invasion" films (led by Independence Day) had run its course.

Purchase DVD/Blu-ray/4K UHD physical copy of War of the Worlds today at Amazon.com

Download War of the Worlds in Digital HD/4K from the iTunes store.

Listen to the War of the Worlds soundtrack on Apple Music.

War of the Worlds images are © Paramount Pictures. All Rights Reserved.

War of the Worlds 4K Review 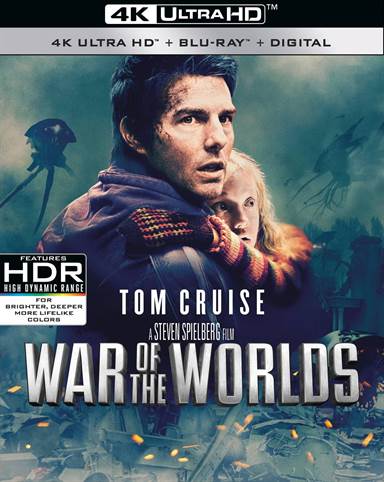 In 1898 H.G. Wells wrote a novel called The War of the Worlds.   It told the fictitious story of an alien invasion taking over the earth.  In 1938 Orson Welles infamously narrated a radio broadcast of the "invasion" but since many listeners tuned in later they missed the announcement at the beginning of the shows stating the news broadcast wasn't real.  Mass hysteria ensued as the public really believed the Earth was being invaded.  Since then there have been numerous adaptations including television series, video games, comic books, and seven films. In 2005, Steven Spielberg (Raiders of the Lost Ark) helmed one of War of the Worlds films starring Tom Cruise (Top Gun).  On May 19th, for the 15th anniversary of the movie, Paramount Pictures is releasing it on 4K.

Ray Ferrier (Cruise) is a blue-collar worker and a divorced father of two, Rachel (Dakota Fanning; Man on Fire) and Robbie (Justin Chatwin; Taking Lives).  When his ex-wife (Miranda Otto; The Lord of the Rings: The Two Towers) drops them off for a typical weekend visit, it is an average yet tension-filled exchange.  However, when a massive storm filled with lightning strikes disrupts power, it is only the beginning of a terror crammed a few days.

Those strikes, unbeknownst to the citizens of the world, were really alien transports to deliver the hostiles to their killing machines that were buried underground long ago.  Suddenly, cities all over the world are under attack against forces they can't possibly defeat.  These machines. At first, they are vaporizing people then suddenly they start capturing them, sucking out their blood from giant looking straws and then painting the countryside with the blood to use as fertilizer for their vegetation.  Ray must find a way to keep his kids safe as they travel to meet up with his ex-wife at her parents' home in Boston.

Cruise, unlike many of his characters, plays somewhat of a jerk in this film but also portrays a quick-thinking individual who genuinely cares about his kids though he doesn't always show it.  Even at a young age, Fanning showed great potential as an actress here as we watch while she is practically forced to grow up almost overnight.  Chatwin plays a typical brooding teenage boy who challenges his father at every turn.  Tim Robbins (The Shawshank Redemption) plays Harlan Ogilvy, a deranged man who initially offers Ray and Rachel shelter but then goes crazy once he sees what the aliens are doing.

War of the Worlds is presented in 4K with 2160p resolution and a 1.78:1 aspect ratio.  Details are sharp and clean which showcases the aliens beautifully and shows off the bloody vegetation as disgustingly creepy.  The Dolby Atmos audio is crisp and layered with dialogue set in the center channel while the special effects sound the viewer.  My only disappointment with the audio is that it is probably my least favorite of all of composer John Williams' scores.  Otherwise, the audio is terrific and, let's face it,  that is more of a personal preference than a technical one.
The extras, housed on the Blu-ray disc,  are all previously released material and include:


Spielberg always delivers a quality product and teaming him with Cruise results in a well done, modern rendition of this classic story. Fanning was also a great choice (reminding me of a young Drew Barrymore in E.T.: The Extra-Terrestrial) and the special effects are incredibly detailed.

The suspense keeps your heart pounding while the visuals are appealing to the eye.  If you are a fan of the genre this is one movie you should add to your collection.