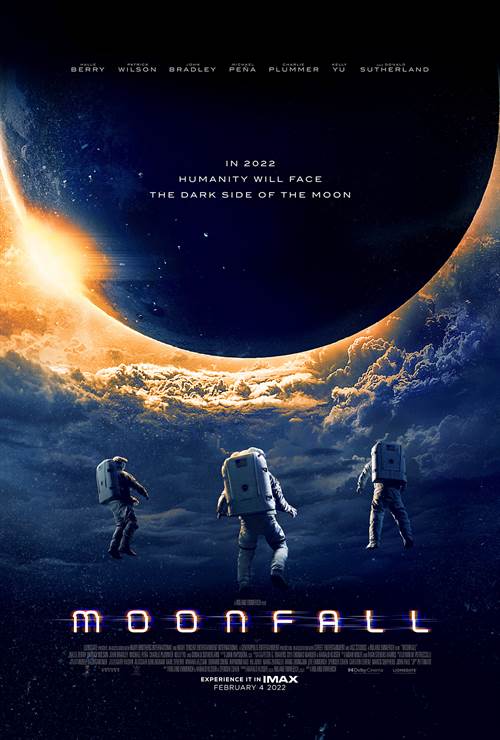 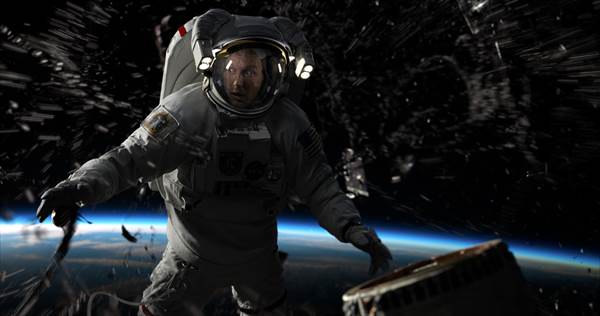 In Moonfall, a mysterious force knocks the Moon from its orbit around Earth and sends it hurtling on a collision course with life as we know it. With mere weeks before impact and the world on the brink of annihilation, NASA executive and former astronaut Jo Fowler (Academy Award® winner Halle Berry) is convinced she has the key to saving us all – but only one astronaut from her past, Brian Harper (Patrick Wilson, “Midway”) and a conspiracy theorist K.C. Houseman (John Bradley, “Game of Thrones”) believes her. These unlikely heroes will mount an impossible last-ditch mission into space, leaving behind everyone they love, only to find out that our Moon is not what we think it is.

Stream Moonfall in Digital HD/4K from the AppleTV store.

Listen to the Moonfall soundtrack on Apple Music.


Moonfall Hollywood Premiere Included Informal Poolside Party  2/1/2022 3:58 PM EST
"Moonfall", which is slated for a Feb. 4 release, had its Hollywood premiere downsized. The original plan was to have 1,200 people in Westwood with the streets of the Regency theatres closed off for the red carpet. Then, due to omicron, the party was set for 300 at TCL Chinese Theatre in Hollywood, followed by a poolside party at director Roland Emmerich's home."When Lionsgate said we could do it ...  More>>

See an Advance Screening of MOONFALL in South Florida  1/27/2022 9:56 AM EST
Did you see the video of a meteorite in the night sky last week? Are you worried the sky was falling?... the end was near? What if it wasn't a simple meteorite but the moon?  THE ENTIRE MOON hurdling through space to crash into earth.  That is only half the story of the new film, MOONFALL.Lionsgate, in conjunction with FlickDirect, would like to offer some lucky winners one electronic admit-two pa...  More>> 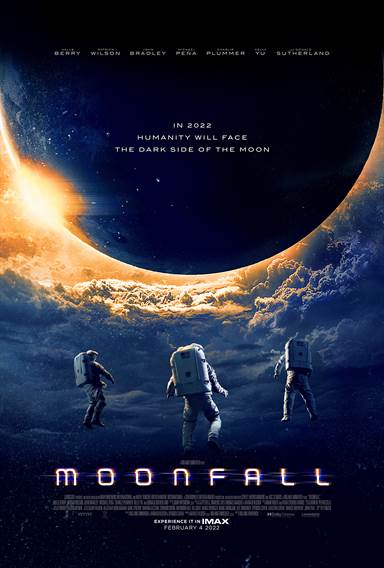 When one makes a cake, they typically follow a recipe…two eggs, one cup of flour, a teaspoon of vanilla, etc.  When one makes a movie, sometimes there is a formula, and other times things are made up as the production goes along.  For writer/producer/director Roland Emmerich (Independence Day), his films have typically been more of the latter with a hint of the former added.  However, his latest film, Moonfall, seems to be a well-constructed cake made by following a recipe, or in this case, borrowing bits and pieces of several films. Simply take a pinch of Contact, a dash of The Abyss, a tablespoon of Independence Day, and a cup of Armageddon, mix them all together and the result is Moonfall.

Astronaut Brian Harper (Patrick Wilson; Insidious) is on a repair mission when an unidentified object crashes into the shuttle knocking out his co-pilot, Jo Fowl (Halle Berry; Monster’s Ball), and hurdling his engineer, Alan Marcus (Frank Fiola; Bad Santa 2), into deep space.  Despite his insistence that what hit them was unnatural and citing negligence on his part, NASA fires Harper, ruining his marriage and his relationship with his son, Sonny (Charlie Plummer; Words on Bathroom Walls).

Ten years later, Harper lives in a one-bedroom apartment, on which he owes three months back rent, and is doing presentations about space for elementary school kids.  When one of his presentations is hijacked by KC Houseman (John Bradley; Game of Thrones), Harper has him thrown out but not before Houseman tells him the moon is out of orbit.  Meanwhile, NASA is making the same discovery, and scientists from around the world realize that something needs to be done quickly or the Moon will break apart and crash into Earth.  Of course, NASA Acting Director Fowl asks Harper for his help even though he hates NASA and harbors resentment towards Fowl for not backing him up when he was fired ten years earlier.

Wilson was typically not cast as the leading male role in many of his previous films, but he is an excellent choice to play Harper.  He commands his crew well, is willing to take responsibility for saving the world, and has the lean physique and good looks expected of a leading man.  Berry isn’t necessarily the obvious choice either, but the two actors work well together, and she has an undeniable screen presence to keep the audience engaged.  Bradley rounds out this trio nicely and is often the comic relief in an otherwise serious and heavy film.

Emmerich and his co-writers have a decent story up until Act III, then everything falls apart.  And…this is where the plot gets cheesy and had more than a few of us rolling our eyes at the stupidity of it all.  This is a disaster film but not in the way it was intended to be and the last third of the movie brings down the momentum built in the first two-thirds of the film.  The only good thing about Act III is the graphics show improvement from those early in the film, especially when the moon’s gravitational pull suddenly alters the tide and causes massive flooding.

Emmerich has had a few hits over the years and at least twice as many misses and Moonfall, unfortunately, falls into the latter category.  He had some great ideas but “too many cooks in the kitchen”, adding unnecessary ingredients, makes the cake overcooked, hard to swallow, and not as tasty as it may look on the surface.