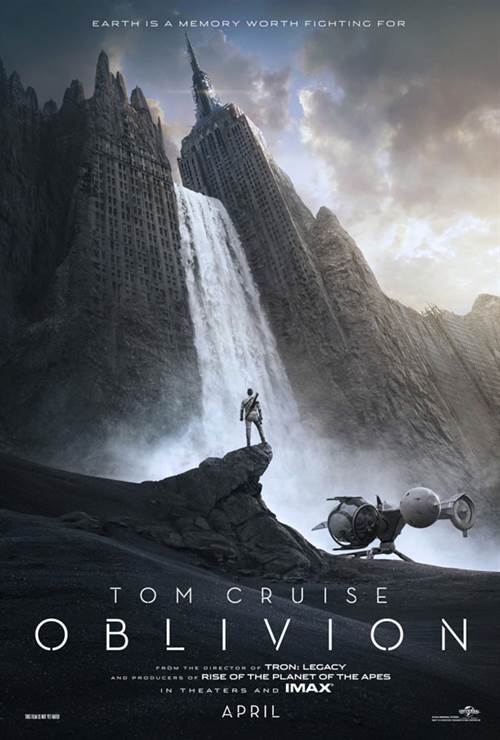 Jack Harper (Cruise) is one of the last few drone repairmen stationed on Earth. Part of a massive operation to extract vital resources after decades of war with a terrifying threat known as the Scavs, Jack’s mission is nearly complete.

Living in and patrolling the breathtaking skies from thousands of feet above, his soaring existence is brought crashing down when he rescues a beautiful stranger from a downed spacecraft. Her arrival triggers a chain of events that forces him to question everything he knows and puts the fate of humanity in his hands.

Stream Oblivion in Digital HD/4K from the AppleTV store.

Listen to the Oblivion soundtrack on Apple Music. 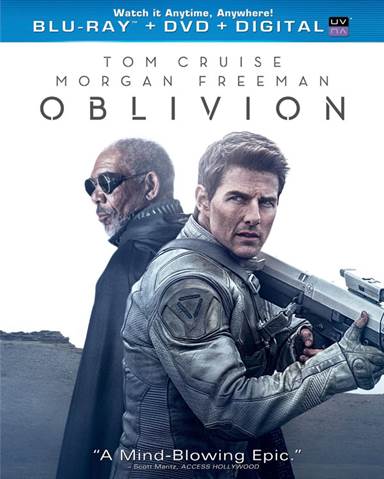 "Oblivion" is sci-fi entertainment that recalls genre pictures from the 1980s and ‘70s, where character and spectacle were more evenly matched. It's a strikingly designed and photographed effort that indulges only a handful of blockbuster bonanza moments, more attentive to its exploration of identity and paranoia, almost old fashioned in its inspection of psychological disruption. That's not to suggest "Oblivion" isn't exciting, but it carries more of a literary tone, hoping to extract suspense through intimacy instead of explosions, constructing a beguiling atmosphere of isolation and revelation that keeps the production alert, despite a few convoluted twists along the way.

In the year 2077, Earth has been emptied, losing its population decades earlier when an alien attack forced humanity to use nuclear weapons as defense, poisoning the planet. With survivors re-establishing life on the moon Titan, a corporation oversees the rehabilitation of Earth and the extraction of its natural resources, with mechanic Jack (Tom Cruise) and communications officer Victoria (Andrea Riseborough) in charge of maintaining enormous "Hydro-Rigs" that tower over the landscape, using armed drones to help patrol the land for any signs of the invading aliens, called "Scavengers." In a relationship with Victoria, Jack is haunted by visions of a previous life with another woman, trying to make sense out of his subconscious as he makes daily rounds in his Bubble Ship. While superior Sally (Melissa Leo) monitors from afar, Jack is alarmed when a capsule falls from the sky containing Julia (Olga Kurylenko), the same woman he's dreaming about, and shocked when an unknown force ambushes him, led by the enigmatic Malcolm (Morgan Freeman), leaving the dutiful worker who thought he was the last man on Earth profoundly confused and desperate for answers.

"Oblivion" is the second film from director Joseph Kosinski, last seen on screens with the hit "TRON: Legacy." In many areas of production, the "TRON" touch has carried over to "Oblivion," detailing a sharp, pristine world of touch screen technology, and scoring by M83, Anthony Gonzalez, and Joseph Trapanese has a similar digital lift, helping the effort acquire a few euphoric moments the script alone isn't able to snatch. Instead of a glowing grid to manipulate, Kosinski has the whole world here, or at least New York City, which is explored in a bombed-out state, with crumbling buildings, flattened stadiums, and twisted bridges slowly swallowed by time, watching Jack traverse a nationwide cemetery where humanity once flourished, recalling iconic games of football and taking refuge in his own woodsy hiding spot, where the worker bee bathes in the tranquility of greenery, flannel shirts, and Led Zeppelin on vinyl. A mixture of Icelandic and American locations generate a stunning futureworld of the familiar and the alien, and Kosinski has a terrific eye for the expanse, including the perch-like home for Jack and Victoria, who live above the clouds for safekeeping.

"Oblivion" is a dazzling feature, extending to the machinery Jack employs to carry out his work, including the zooming, swooping Bubble Ship, which plays an important part in the story, acting as Victoria's eyes and ears when her partner takes off on his own mission. Kosinksi nails the scale of the picture, yet there's deliberation about the tale that's refreshing, tracking Jack's concentrated efforts to decode Julia's arrival, with the orbiting woman unnerving the mechanic with her vague familiarity. Instead of constant heroics, Jack's almost selfish in his investigation, confronted with paralyzing disclosures about his life that feed into the screenplay's mystery. In fact, while Kosinski is attentive to the needs of chase and capture sequences (the angry sphere-shaped drones provide numerous opportunities for action set-pieces) to wow the audience, he's more in tune with the dramatic developments as Jack gradually becomes aware of his situation on Earth. It's here where the literary atmosphere kicks in, trusting nuances in behavior and askew elements of intimidation will be more valuable to the viewer than a chaotic laser show of mass destruction. While "Oblivion" is retro in many areas of production, its page-turning tone of secrets and lies remains intriguing, despite a clouded approach that could leave some sci-fi-impaired viewers in the dark.

Arriving on Blu-ray August 6th, fans of the film will have a terrific chance to explore the world of "Oblivion" even deeper with an expansive special feature set detailing the production that went into the film. The movie comes in Blu-ray, standard DVD and Ultraviolet for those fans on the go.

As always, when it comes to Blu-ray you know you're going to get the best in video and audio quality. And with Oblivion, there's no exception. The 1080p video explodes off the screen allowing the stunning visuals within the film to become more than just pictures but a rich environment that pulls you in from start to finish. The same can be said for the 5.1 surround sound audio. Every channel comes through clear and sharp without any background hiss or crackle and dialogue isn't lost due to over bearing special effects noise. Equally the special features are just as impressive:

-Making of: multi part feature covering the making of Oblivion including:

-Destiny: Looks inside the conceptualization, development and pre-production of Oblivion and the planning that went into the shooting of the film.

-Voyage: Follows the creation of the amazing Bubble Ship from its early design conception to its journey around the world. (Blu-ray only)

-Illusion: Focuses on the film's post-production and dazzling special effects.

-Harmony: Delves into the musical world of M83

There's a significant puzzle to "Oblivion" that won't be spoiled here. The second half of the film takes off into unanticipated directions, while making a handful of predictable choices as well. Despite a few pacing and storytelling shortcomings, Kosinski has a steady handle on this world, and his cinematic influences, including "Omega Man" and "2001," always enrich the picture, feeling like honest reverence instead of cheap theft. Perhaps "Oblivion" isn't as challenging as it imagines itself to be, yet its sophistication and interest in vulnerability is welcome in a genre that often avoids the subtle to go big with the boom.