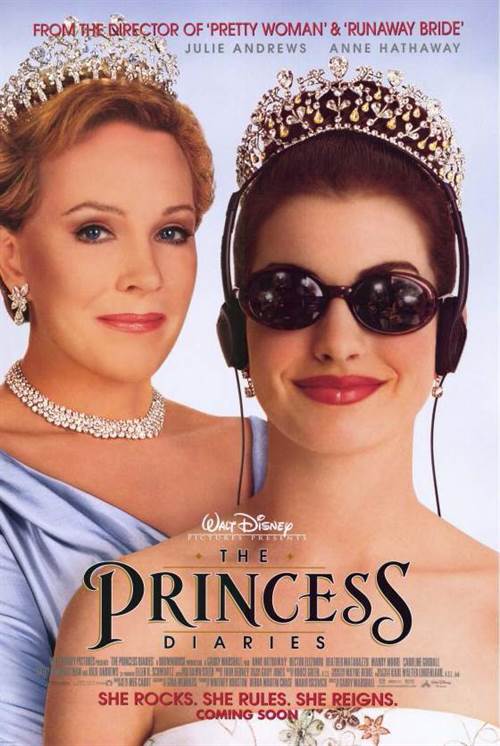 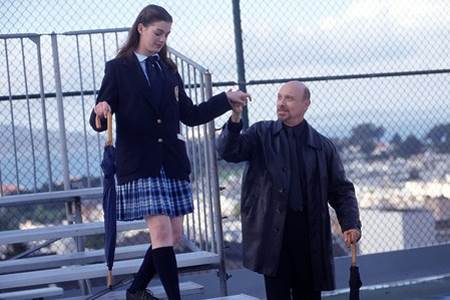 Shy San Francisco teenager Mia Thermopolis (ANNE HATHAWAY) is thrown for a loop when, from out of the blue, she learns the astonishing news that she's a real-life princess! As the heir apparent to the crown of the small European principality of Genovia, Mia begins a comical journey towards the throne when her strict and formidable grandmother, Queen Clarisse Renaldi (JULIE ANDREWS), shows up to give her "princess lessons."

The two instantly clash - Mia has no intention of leaving her normal life to become the ruler of a far-off country, while Queen Clarisse insists it is her duty. Clarisse is determined to do a complete makeover of this sparkling - if not polished - diamond in the rough in order that she take her rightful place in the royal line of succession. Now the reluctant princess must make the biggest decision of her life - whether to remain with her family - or leave everything behind to accept the royal responsibilities that comes with being the Princess of Genovia.

Download The Princess Diaries in Digital HD/4K from the iTunes store. 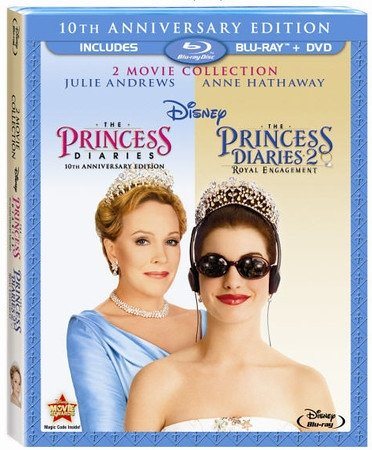 It's every little girl's fantasy, and even the big dream of grown-up girls who might not be the most popular, the wealthiest, or the prettiest in school, at work, or around town, to one day be whisked away into a fairy tale-come-to-life, to live a real-life rags-to-riches impossible dream sort of story, to escape all the ills of one life and be thrust into another of prestige, riches, history, and where respect is a way of life, not a rare courtesy. It's the kind of thing, really, that only happens in the movies, and it's happened again -- twice -- in The Princess Diaries, a lighthearted and well made little series about a nobody teenaged girl with big glasses and frazzled hair who's the joke of her school but turns out to be a princess and the heir-apparent to the throne of a small (and fictional) European country. Looks like the joke's on her crude classmates. The Princess Diaries, directed by Garry Marshall (Pretty Woman), is aimed at young girls in particular, but girls of all ages with a dream, a funny bone, and a love for storybook romance.

Mia Thermopolis (Anne Hathaway) is probably the most invisible girl at her prep school. Frizzy hair, glasses, and a fear of public speaking has her on the wrong side of jokes. Her only real friend is the buck-toothed Lilly (Heather Matarazzo) who doesn't seem to mind Mia'a lack of popularity, style, or rhythm. One day, Mia is called upon to meet with her Genovian grandmother Clarisse Renaldi (Julie Andrews) from whom she learns that she is not only the daughter of a struggling San Francisco painter (Caroline Goodall), but that she's also European royalty. She's Princess Mia, daughter of the late King and destined to rule the nation. But she's just a nobody. She's allowed the teasing to get to her head, leaving her feeling forever  put down and lacking any self-confidence, not exactly what makes up a person of royalty. But with her grandmother's help, the encouragement of her bodyguard Joe (Hector Elizondo), and a makeover at the hands of a style magician named Paolo (Larry Miller), Mia just might find her inner Princess after all.

The Princess Diaries certainly has its charms, but it's hardly dramatic film making. Here's another in a rather long and storied line of "rags to riches," tale that include make overs, increasing self-confidence, and a very general feel-good vibe that speaks to audiences on the importance of faith, self-confidence, and trust in fate. It's the typical magical transformation movie that sees the transformation of a self-described "invisible" girl who is nauseated at the thought of public speaking into a polished princess. The movie basically builds up towards Mia'a ability to accept the position of Princess from behind a podium following an embarrassing classroom exercise where she's tasked with speaking before her peers. In between, her hair is straightened, her glasses removed, and her confidence ever-so-slightly. But for as unimaginative and predictable as the movie may be, it's genuinely funny consistently charming. The plot is the sort that never really wears out or even wears thin. It's uplifting and offers a good message on remaining true to oneself but also finding something on the inside that others miss. The cast is excellent, and much like Garry Marshall's Pretty Woman, this film is rightly remembered for its leads but it's Hector Elizondo and Larry Miller who absolutely round the movie into shape.

With the success of the first film, there was a sure guarantee for a sequel. Mia Thermopolis is now five years older. She's just graduated from college, and the time has come for her to pack up her things and make the big jump across the pond to take her rightful place in Genovian history and settle in as that nation's new Queen. She and her trusted feline companion Fat Louie board a plane and make it safely to Genovia, but if Mia simply expected to plop herself down on that throne, well, she has another thing coming. It turns out that an old Genovian tradition states that for a Queen to take the throne, she must be married. Parliament -- in a revolt against Mia and led by the nefarious Viscount Mabrey (John Rhys-Davies) -- has ordered the throne to another heir apparent, Nicholas Devereaux (Chris Pine), unless Mia can find herself a husband in thirty day's time. As she pours through a list of suitors with the help of Queen Clarisse Renaldi and her visiting best friend Lilly, Mia thinks she's found "the one" in Prince Andrew Jacoby (Callum Blue). Will she fall in love with this potential husband, or will Mia find the courage to bypass parliament and rule on her own terms?

Although there's no "ugly" Mia this go-round, save for a few flashbacks and a photograph, Princess Diaries 2 follows basically the same cadence, the film again featuring Mia in search of her inner-confidence, this time as she maneuvers through Genovian custom and matters of the heart. The picture recalls scenes and lines from the first -- and from the entire Garry Marshall canon at that -- and finds little originality, spunk, or heart. The movie is overlong and poorly paced, with forced humor and a disappointing lack of charm. The story's predictable at that, though that comes with the territory. The acting is fine, with Andrews and Elizondo stealing the show and their stories proving more interesting than the lead. Hathaway looks great, regal and prim and everything a fairy tale Princess should be -- if she were animated she couldn't be any more a Disney Princess -- and she lights up the screen in a very Julia Roberts-esque way every time she appears. Chris Pine, in his first role, does all he can to channel Alec Baldwin, while the venerable John Rhys-Davies does well as a jolly good villain.


The Princess Diaries and its sequel are best enjoyed by young girls or ladies of any age with a romantic streak and a love for a good fairy tale. The movies target audiences with that frilly streak and don't give the guys much reason to watch, but credit Garry Marshall's double-bill for knowing its audiences and what they want out of a movie. This is everything a live-action Disney Princess Fairy Tale should be. It's got a pretty girl in the lead role, an impossible dream come true, comedy, romance, rich visuals, and a quality array of characters. These movie are well made and nicely acted, but really, they're only for those people who know they love these sorts of movies. Disney's Blu-ray release of The Princess Diaries collection features strong video, quality audio, and lots of supplements. Covering 3 discs with a full range of extras from bloopers, to out takes, behind-the-scenes documentaries, deleted scenes, music videos and commentaries, this combo pack is a true gem. Highly recommended for fans as a gift or a surprise for that special someone in life.