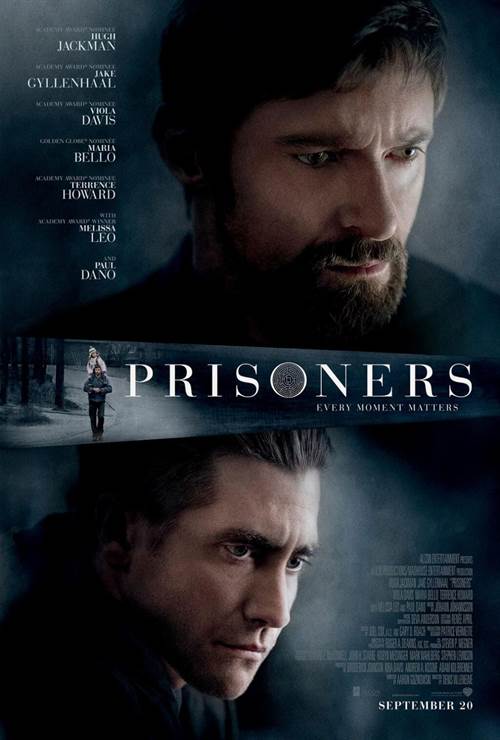 Keller Dover is facing every parent’s worst nightmare. His 6-year-old daughter and her young friend are missing, and as minutes turn to hours, panic sets in. The only lead is a dilapidated RV that had been parked on their street. Heading the investigation, Detective Loki arrests its driver, but a lack of evidence forces the only suspect’s release. Knowing his child’s life is at stake, the frantic Dover decides he has no choice but to take matters into his own hands. The desperate father will do whatever it takes to find the girls, but in doing so, may lose himself, begging the question: When do you cross the line between seeking justice and becoming a vigilante?

Download Prisoners in Digital HD/4K from the iTunes store. 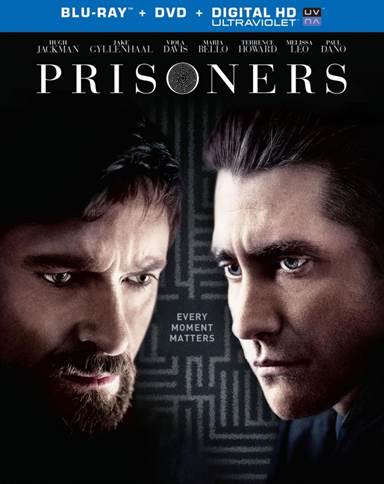 Much more than the story of two kidnapped children and the desperate father willing to do whatever he can to find them, Prisoners is an unsettling labyrinth of impossible decisions, gut-knotting powerlessness and a twisting, turning Zodiac-esque procedural and mystery more complex than the film's straightforward trailers suggest. Director Villenevue and screenwriter Aaron Guzikowski strike a difficult balance too, between the spectacularly performed human drama that is the film's first ninety minutes and the more calculated, nearly overcooked police procedural that dominates its third act.

When Keller and Grace Dover (Hugh Jackman and Maria Bello) sit down to a warm Thanksgiving dinner with good friends Franklin and Nancy Birch (Terrence Howard and Viola Davis), they set aside the sorrow and struggles of their lives. All that changes in an instant, though, when their daughters, Anne and Joy (Erin Gerasimovich and Kyla Drew Simmons), make a quick run to the Dovers' house and never return. Local police detective Loki (Jake Gyllenhaal) soon brings in the case's chief suspect for questioning: an emotionally unstable, mentally challenged young man named Alex Jones (Paul Dano). But with no hard evidence and diminishing suspicion, Loki's department is forced to release Jones into the care of his mother (Melissa Leo), believing he lacks the mental acuity to commit a premeditated kidnapping of two victims in broad daylight. Keller, however, believes otherwise. Taking the law into his own hands, he captures Jones, retreats to an abandoned building and tortures him day after day in the hopes of learning the whereabouts of his daughter. Whether his decisive actions will actually benefit her is another matter entirely.

Jackman is terrific; raw, broken, frightening and, above all, a convincing everyman. He handles Keller's seemingly contradictory beliefs with a deft touch, managing everything from the man's faith to his survivalist reason and willingness to do what others won't, or shouldn't. Bello, Howard and Davis, meanwhile, tackle disquietingly different facets of panic, fear, denial and grief, each to heart-wrenching ends. (Particularly Davis, whose cold detachment resonates the most despite her limited screen time. Most every parent will identify with one of the four; I'm not a parent and I can't even imagine how I would something like this.) Dano is suitably unnerving and eerily effective, both as a caged animal and a childlike enigma. And Gyllenhaal wrestles scene after scene away from his Academy-bait co-stars in what could have been a rather thankless, perhaps even forgettable role. His detective is a rarity in movies: a diligent career cop who's grown weary of dealing with victims' families. Of being a bearer of crushing news. A siphon for others' anger, hopelessness and frustration. A man tasked with witnessing acts of unthinkable depravity. Loki has tremendous empathy for families like the Kellers and Birches, but that empathy takes such a tremendous toll that he's bottled it away, irritated whenever it threatens to claw its way to the surface.

Had Prisoners just been another home-brewed vigilante drama, though -- another ordinary-husband-and-father-pushed-to-his-limits thriller -- there wouldn't be much to it beyond the impeccably cast actors, other than Roger Deakins' bleak but breathtaking cinematography. It's the moral and ethical ambiguity that makes the film so intensely watchable, gripping even, and leaves room for forgiveness on the few occasions Villenevue and Guzikowski overplay their hand. (After an unbearably distressing opening act and riveting middle stretch, the film takes a slow right turn down a very familiar genre road, with one twist too many.) Villenevue's unflinching confidence and command of the material leaves little room for predictability or relief, and beneath Keller's rage and anguish lies an endless stream of impossible-to-answer questions. Parents, myself included, take comfort in thinking we know exactly how we'd handle a similar situation. In these dark hypotheticals we talk about late at night, we fancy ourselves closet vigilantes. In reality, the fear that our involvement would only lead to the further endangerment of our child would surpass any belief that we would do any good by intervening. Interestingly, Villenevue and Guzikowski are willing and more than eager to entertain the possibility that Keller's involvement only make things worse, if he accomplishes anything at all.
Prisoners features a strong 1080p/AVC-encoded video transfer that captures every nuance of Roger Deakins' cold, rain-swept cinematography. Colors lack primary punch yet remain lifelike and naturally saturated throughout. Skintones are quite striking, with deep, foreboding black levels, oppressive shadows and impeccable contrast. Detail is exacting too, even though filmic softness is at play, and the film's slight grain field is intact. Prisoners' DTS-HD Master Audio 5.1 surround track prizes realism above all else, and might be unjustly dismissed by those expecting something more direct or intense. Subtlety goes a long way, though, and the film's soundfield is as absorbing as it is effective. Dialogue is intelligible, believably grounded in the mix and carefully prioritized. LFE output is often an exercise in restraint, albeit with jarring demonstrations of power that lend the film's violence a disquieting viscerality.

Only two behind-the-scenes featurettes are included: "Every Moment Matters", more an extended theatrical promo than anything more substantial, and "Powerful Performances", with interviews with the film's ensemble cast.

Prisoners is a more eclectic, divisive film than I was anticipating, and not for the reasons its trailers suggest. Waxing between intimate drama and complex procedural, it's nearly ripped in two. Villenevue forges a gripping balance, though, and doesn't take the easy road, even when traveling winding, twisting paths with which cinephiles will be most familiar. Jackman, Gyllenhaal and their co-stars are uniformly excellent as well, Deakins' cinematography is a character in and of itself, and the story of the Kellers and the Birches is the stuff of every parent's worst nightmares. Which brings us to Warner's Blu-ray release. Slim supplemental package aside, the Blu-ray edition of Prisoners is a strong one, with a striking video presentation and immerssive DTS-HD Master Audio 5.1 surround track.