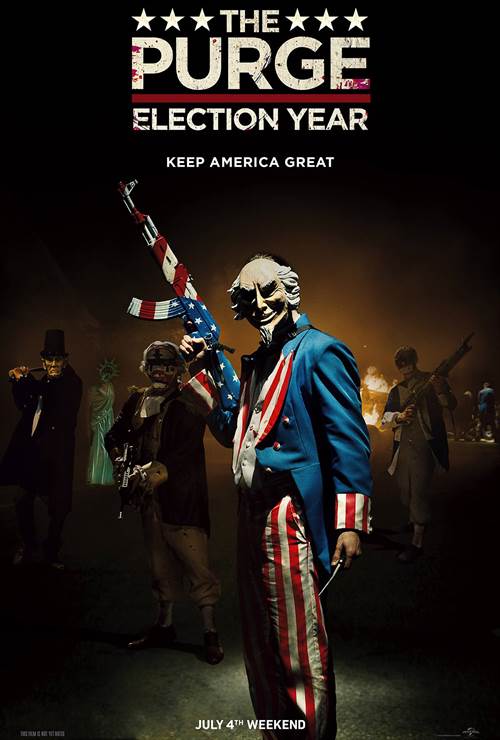 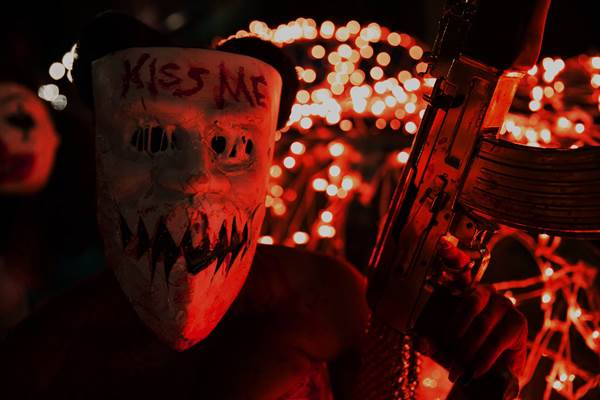 It’s been two years since Leo Barnes (Frank Grillo) stopped himself from a regrettable act of revenge on Purge Night. Now serving as head of security for Senator Charlie Roan (Elizabeth Mitchell), his mission is to protect her in a run for president and survive the annual ritual that targets the poor and innocent. But when a betrayal forces them onto the streets of D.C. on the one night when no help is available, they must stay alive until dawn…or both be sacrificed for their sins against the state.

Stream The Purge: Election Year in Digital HD/4K from the AppleTV store.


Win a Forever Purge Blu-ray Combo Pack  9/16/2021 10:17 AM EST
In 2013 The Purge introduced the idea that for one night all crime, including murder, was legal. It was such an intriguing idea that it spawned four sequels.  The latest one, THE FOREVER PURGE, took the concept even further by showing what could happen if some people refused to stop killing. With the 4K, Blu-ray, and DVD scheduled to be released later this month, Universal Home Entertainment, in c...  More>>

SDCC Purge Panel to Focus On Both Film and TV Series  7/10/2018 4:51 PM EST
Purge fans can look forward to something special at San Diego Comic-Con this year. Blumhouse will be holding a Purge panel on Saturday, July 21 from 5:15-6:15 PM in room 6BCF. The panel will focus on both the Purge TV and film editions.Jason Blum (Producer), James DeMonaco (Director) and Anthony Hemingway (Director of USA's Purge TV Series) will be on hand along with the cast from both the series ...  More>>

Win Complimentary Passes For Two To An Advance Screening of Univ...  6/18/2018 3:52 PM EST
One day a year in the United States there are no laws. Everything is legal…including murder.  In 2013 the very idea enthralled audiences and The Purge franchise was born.  This summer the fourth installments takes us back to the beginning in THE FIRST PURGE.  Universal Pictures along with FlickDirect are offering some lucky winners passes to a complimentary screening before the movie is released n...  More>>

The Purge Adds to Its TV Series Cast  3/30/2018 10:19 AM EST
USA Network and Syfy will be premiering a new series based on the popular horror film franchise The Purge.The franchise follows the events that occur during the 12 hours on the only day every year that complete lawlessness is allowed.Newly cast to the series is Amanda Warren (The Leftovers) and Colin Woodell (Unsane) who will join series leads Gabriel Chavarria and Jessica Garza.Warren will play t...  More>>

Win a Blu-ray Copy of The Purge: Election Year From FlickDirect ...  10/4/2016 4:26 PM EST
On one night every year anything is legal including murder.  It's kind of a unique concept and an interesting idea that has intrigued audiences since The Purge first hit theaters in 2013.  The franchise has been a success and the third film in the trilogy is set to hit stores on Blu-ray, DVD and Digital HD on October 4, 2016. To celebrate the release Universal Pictures and FlickDirect want to give...  More>>

The Purge Being Adapted for Television Series  9/30/2016 2:52 PM EST
The Purge, the successful horror movie franchise, will now be heading to the small screen.  Director James DeMonaco recently spoke about the news during an interview.  After being asked if fans would ever see Purge on TV, DeMonaco said, "Dude, it's so weird you bring that up. Yes! Not an anthology...I guess kind of an anthology -- more of an interwoven anthology. They came to me about a TV show, m...  More>>

Win a Digital HD Copy of The Purge: Election Year From FlickDire...  9/21/2016 3:59 PM EST
On one night every year anything is legal including murder.  It's kind of a unique concept and an interesting idea that has intrigued audiences since The Purge first hit theaters in 2013.  The franchise has been a success and the third film in the trilogy is set to hit stores on Blu-ray, DVD and Digital HD on October 4, 2016. To celebrate the release Universal Pictures and FlickDirect want to give...  More>> 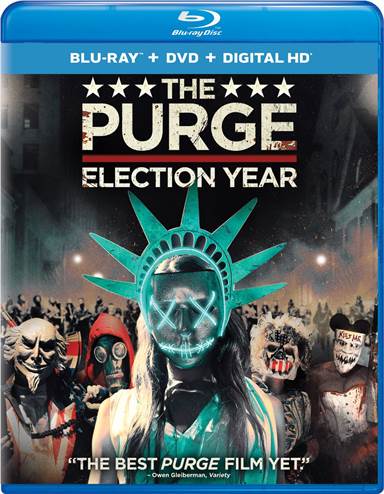 In theory, The Purge was an interesting and unique premise.  No conscience for one night.  Everything is legal including murder.  The most anyone can hope for is to survive 12 hours of madness and mayhem and for those causing it… to enjoy their freedom.  While the concept was great the reception wasn't what the creators had hoped for.

Ironically the second film, The Purge: Anarchy faired slightly better, which is unusual for sequels in general, and now the third installment, The Purge: Election Year has also exceeded the original.  Out now on Blu-ray and DVD, this third film is still basically the same idea but with a few current events twists added to the plot.

Two years after Anarchy left off, we find Leo (Frank Grillo; Kingdom) in a better place.  He gave up his plot for revenge and went back to what he knows… police work.  This time, he is the security detail for Senator and Presidential candidate Charlie Roan (Elizabeth Mitchell; Lost).  As the annual purge night approaches, the Senator is a prime target, as she wants to abolish the purge for good and many of the NFA members oppose her.

When a member of her own security betrays her, Senator Roanshe and Leo have to escape her secure (or so she thought) home and fend for themselves on the streets.  A number of anti-purgers who have secretly plotted to kill her opponent, the current president, aid them and hides them as best they can.  These individuals have created safe houses for the injured and the hunted, while plotting the assassination.  Roan must convince them not only to help her and Leo, but also to abandon their quest and let her win the election fair and square.

Grillo and Mitchell do a good job portraying their characters and Grillo's martial arts training is evident in his fight scenes, especially the one at the climax of the film.  Joining them is a talented cast, including Mykelti Williamson (Forrest Gump) as shop owner Joe Dixon, who is out to defend his turf against looters but ends up helping the Senator and Dixon's employee, Marcos (Joseph Julian Soria; Max), a new immigrant to the United States and an opponent of the purge.

What makes this latest film slightly more interesting than the last two is the mimicry of the current social commentary in this country.  While the first two touched upon the divide in economic classes (the second more than the first one), this one accentuates the differences between the have and have nots and the racial tension that is splashed across the front pages of the papers daily.  This film also highlights the election that includes a strong, blonde, female candidate.  Remind you of anyone we know?

The 1080p high definition video is terrific on this Blu-ray and every bit of blood splatter comes across in great detail.  The hues are vibrant when called for and the black tones meld together nicely.  The audio is well mixed and what you would expect from DTS-HD Master 5.1 audio with gunshots ringing out from every speaker of the surround sound.

There are only three extras on this disc, which is a little disappointing.  The deleted scenes don't add much to the film and can most likely be skipped, but the other two are somewhat interesting and informative.  There is a five minute look at the "making of" entitled Inside The Purge and a 3 minute feature that is called Character Spotlight: Leo.  The latter was the most enjoyable with some great insight into Grillo and Leo Barnes.  I wish there had been one or two more of these on the disc, but the one is certainly worth sitting through.

None of films in The Purge franchise are spectacular works of art, but, for what they are, they are enjoyable enough and this last one is more of the same.  I get the sense that the trilogy is sure to be a cult classic,  which makes one wonder if there will be a fourth one (I speculate there will,  especially because of how this one ended).  If you own the first two, I think it is worth your while to add this one to your collection, and, if you like the films but don't own them, you may want to consider investing in the trilogy.