A dramatic thriller set against the backdrop of a series of historic events, DreamWorks Pictures/Fox 2000 Pictures’ “Bridge of Spies” tells the story of James Donovan, a Brooklyn lawyer who finds himself thrust into the center of the Cold War when the CIA sends him on the near-impossible task to negotiate the release of a captured American U-2 pilot. Screenwriters Matt Charman and Ethan Coen & Joel Coen have woven this remarkable experience in Donovan’s life into a story inspired by true events that captures the essence of a man who risked everything and vividly brings his personal journey to life.

Download Bridge of Spies in Digital HD/4K from the iTunes store. 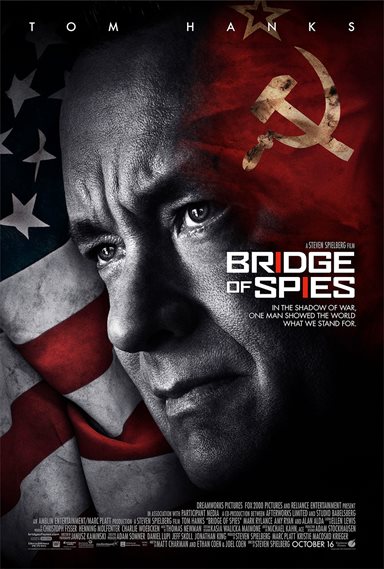 For children of the 50's, Bridge of Spies will be a nostalgic look back at a time when the world was a very different place.  For those of us from younger generations, it will be an interesting view of world events from when communism overran half of Germany.  Either way, it is a powerful film, highlighting the more human side of the cold war.

Based on a true story, Bridge of Spies takes a look at Attorney James Donovan (Tom Hanks; Forrest Gump, Castaway) and his defense of convicted spy Rudolf Abel (Mark Rylance; The Other Boleyn Girl).  Of course, that is only half the story and, with Donovan's foresight allowing Abel life to be spared, it sets the path for a prisoner of war exchange between Abel and Francis Gary Powers (Austin Stowell; Dolphin Tale), an American shot down over Russia.

The other half of the story is the political game between the United States, U.S.S.R and East Germany in which Donovan finds himself entangled.   The negotiations for the exchange of spies, with an American PhD. Student thrown in, are intense, convoluted and challenging, offering much of the drama in the film.

The strengths of this film are numerous, including the acting, screenplay, direction and cinematography.  Hanks is mesmerizing as the sharp witted attorney/negotiator and Rylance is enigmatic as the Russian spy.   The writing is smooth and the film flows beautifully from scene to scene and Spielberg once again proves why he is a highly sought after director.

The drama and suspense of the screenplay unfolds in a calm and consistent pace without dragging and the scenery and lighting work seamlessly together to set the mood of the 1950's political agenda.

I think one of my only complaints was the soundtrack.  As Hanks' Donovan sits on the plane home form Germany after the prisoner exchange, the orchestration was reminiscent of another hanks film, Apollo 13.  I kept hearing the haunting trumpet in my head and it became a little distracting.

Despite that mild irritant, any Oscar buzz Bridge of Spies garners is well deserved.  Well made, beautifully acted and thematically shot, it is more than an entertaining evening at the movies.  It is a journey through our history that is both enjoyable and poignant.