Tugg Speedman (Ben Stiller), pampered action superstar, sets out for Southeast Asia to take part in the biggest, most-expensive war movie produced. But soon after filming begins, he and his co-stars, Oscar-winner Kirk Lazarus (Robert Downey), comic Jeff Portnoy (Jack Black) and others, must become real soldiers when fighting breaks out in that part of the jungle.

Download Tropic Thunder in Digital HD/4K from the iTunes store.

Listen to the Tropic Thunder soundtrack on Apple Music. 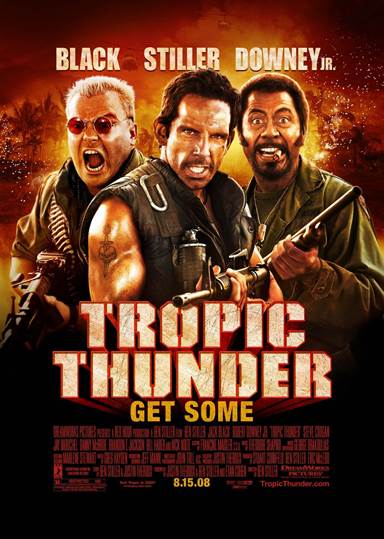 Apocalypse Now was so hard to make they made a movie about making it. They couldn't even figure out how to end it. Brando was so heavy he was problematic (and hard to understand). When it turned out they'd made the still-iconic, best-ever Vietnam war movie I suppose that validated almost everyone who made the movie and came as a giant relief to the people who produced it.

Tropic Thunder is pretty meta this way: it's a movie about a war movie being made that goes horribly wrong. It's also a Ben Stiller vehicle being written and directed by him. The film's a comedy but it also tries hard to be a satire: poking fun with Hollywood inside-jokes (the method actor who goes way too far, one-trick ponies, inhuman producers, and directors who take themselves too seriously). In the film Tropic Thunder (riffing Tropic Lightning, the 25th Infantry division who served in Vietnam) the directors are converting a book into a movie. Needless to say, it's going badly.

Stiller plays washed up super-star Tugg Speedman, who's last attempt to grab an Oscar came in the form of a disaster of a movie about a mentally-challenged man called Simple Jack. He's hoping Tropic Thunder (the movie they are shooting) will revive his failing career. Along side him are the rest of the "star studs" of the star-studded cast (notably Jack Black playing the fat-guy, Nick Nolte playing the real Vietnam vet, Robert Downy Jr. who is in black face because he's a super-method-actor, and a surprise appearance by Tom Cruise).

When things go even worse and the movie is about to be shut down, the director Damien Cockburn (Steve Coogan) decides to save the film by "making it real." He puts them in a jungle area rigged with cameras and explosives ... and things go, well, even wronger! A drug running operation with live guns and real bullets mistakes them for DEA soldiers. At some point they have to sort of buck up and do the soldier stuff for real.

Comedically it's uneven or maybe just "evenly spread."  There's some funny dialog with Stiller, low-brow humor from Black, you can't forget the absurdity of Downey's character in blackface (in the movie he actually undergoes an operation to appear black) next to a real black man--who is by turns offended and confused by Downey's refusal to ever break character.

I'm not overly impressed by throwing the kitchen sink at the audience when it comes to trying to generate laughs. I found that the somewhat soulful or interesting parts were undercut by the rougher parts and by the filmmakers periodically asking us to take the situation semi-seriously because maybe someone could get killed.

I was also constantly reminded of Let's Get Harry (1986), where a bunch of regular Joes have one of their beloved friends kidnapped by terrorists in a South American nation and decide to hire some mercenaries to help free him. The movie has its absurd moments and then is deadly serious and realistic about what is actually going on down there. There are comedic elements but the situation is played utterly straight by someone who knew their stuff.

By contrast, Tropic Thunder doesn't have guts where it really needs them, making its satire a dull blade. Tom Cruise plays (in heavy makeup) a vicious producer who is almost scary to the actual drug runners (but really is fine with Stiller being killed). Cruise hits exactly the right notes as a blackly humorous jerk who is both powerful (both in terms of being super rich and having real screen presence) and inhumane.

If they had built the whole show the way they built his scenes it would cut like a razor (you'd have to lose the broad comedic swaths though, which would probably kill it for the target audience). Instead you get "real" bad guys who never manage to be "that bad." You get fake soldiers who become "real" soldiers--who never really become that real. They become, at best, action hero caricatures of real soldiers.

You have someone saving the day with a TiVo because that'd be funny.

All of this is analysis: if you over-think Tropic Thunder you probably get what you deserve--but the movie has a promise it just never quite achieves. Although it's successful at the box office (which means it is doing something right) its attempt to be all things to all people (probably accomplished by its casting list alone) leaves me thinking of all the potential that it jettisoned by giving Jack Black a fart joke and having Ben Stiller act out Simple Jack parts.

The R-Word Controversy
People in the disability advocacy community have complained about Tropic Thunder because it makes fun of mentally-challenged people. The filmmakers claim they are making fun of actors who troll for Oscars using "serious movies" and trying to artificially manufacture beloved characters. There is a discussion between Downey and Stiller where Downey tells him that his career mistake was going "full retard" (it's okay to go "half retard"--okay to be, say, autistic--he names several movies--but "full retard" is a career killer).

There was even a fake website set up for Simple Jack as part of a viral marketing campaign. Again, the charge is that in the context of the movie, the actors are making fun of other movie makers--but if you just look at the website? Well, you wouldn't know that (the website has been pulled).

Having seen Tropic Thunder, I can safely say that whatever the writers (of which Stiller was the primary) say, they were, unquestionably, making fun of mentally-challenged people. In order to see how this is the case you ask yourself this very simple question: if a person were to make fun of mentally-challenged people, how would they go about it? Answer: (1) show them being retarded in a goofy fashion that encourages the audience to laugh at them and (2) use the term "retard" in a dismissive and degrading fashion to refer to either general stupidity or "retarded" people.

The film does both. It does it in context (and it also makes black jokes in context). It does them fairly well (the real black guy uses the n-word and is upbraided by the fake black guy in method-actor mode). It does them in a way that is not simply and relentlessly mean. But it does do them. If school kids want to find inspiration to make fun of the the mentally disabled, they need look no further than Simple Jack.