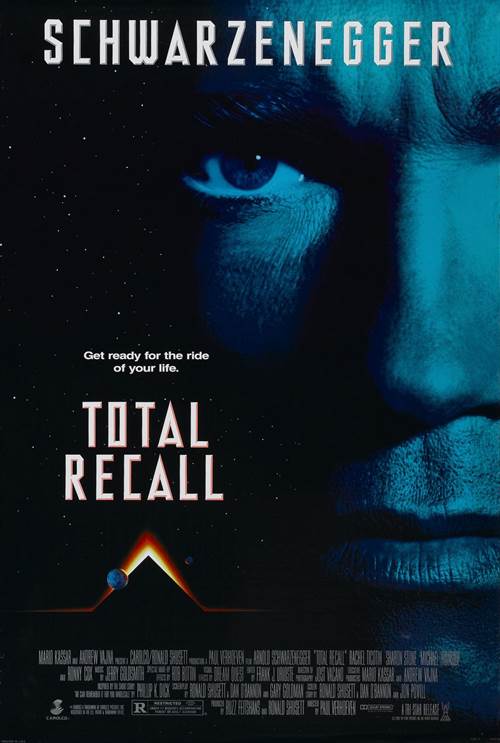 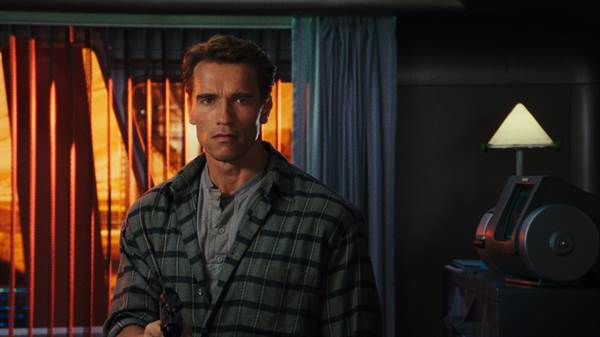 Life is mind-bending and chaotic in director Paul Verhoeven's violent, Oscar-winning sci-fi adventure based on a Philip K. Dick story. When construction worker Douglas Quaid (Arnold Schwarzenegger) discovers a memory chip in his brain during a virtual-reality trip, he also discovers that his past has been invented to conceal a plot of planetary domination. Soon, he's off to Mars to find out who he is and who planted the chip.

Stream Total Recall in Digital HD/4K from the AppleTV store.


Ethan Hawke Joins "Total Recall" Cast  5/11/2011 10:29 AM EST
Joining the cast of the "Total Recall" remake is Ethan Hawke, according to Heat Vision.The film already stars Colin Farrell as Dennis Quaid, man who has a recurring dream of journeying to Mars and eventually buys a dream vacation from a company that sells memories.Ethan Hawke's character is being kept under wraps for the time being, but is said to be a cameo appearance.Filming begins in June in To...  More>>

Beckinsale Offered Role in "Total Recall"  4/21/2011 5:09 PM EST
According to "Deadline", Kate Beckinsale has been offered the role of Lori in the upcoming remake of "Total Recall".In the film, Lori is the wife of Douglas Quaid (originally played by Arnold Schwarzenegger). She turns out to be a plant  of bad guy Cohaagen as well as the girlfriend to villain Richter.Beckinsale is married to the director of the project, Len Wiseman. She has worked with him on the...  More>>

Total Recall Remake In The Works  2/26/2009 10:47 AM EST
According to The Hollywood Reporter, the 1990 sci-fi film, "Total Recall" is going to be getting a facelift.  Columbia Pictures along with Neal H. Moritz and his company, Original Films, are currently developing a newer version of the film that originally starred Arnold Schwarzenegger. The film follows the story of a man who has recurring dreams about going to Mars.  He then decides he will buy th...  More>> 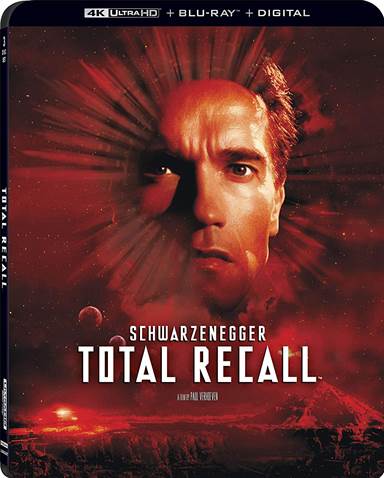 In the 1970s there was a screenplay floating around based on a story by Philip K. Dick (Blade Runner) about a man who experiences a vivid dream/or wakes up from one. The film made its way around all the studios and was stuck in development hell for a while, until one studio, Carolco, a director's studio, got a hold of the script and thought it would make an amazing film for the larger-than-life star,  Arnold Schwarzenegger (Terminator 2). Now thirty years after its initial release Lionsgate, StudioCanal, and director Paul Verhoeven (Robocop) have unleashed a brand-new transfer of the film in 4K UHD for the first time.

Total Recall is a little more complex than most of the films that Arnold Schwarzenegger had been involved with at this time. Schwarzenegger plays Douglas Quaid, a 21st-century construction worker who discovers that his entire memory of the past is not what he thinks it is. He learns that he's actually a secret agent who had become a threat to the government, so they dropped him on Earth with a new identity and memory. After longing for a more exciting life, Quaid goes to a company called Rekall (That guarantees you the memory of a lifetime). Unbeknownst to him, some of his old pals have been keeping tabs on Quaid, and once it appears he blew his memory cap, he is on a wild ride that doesn't stop until the credits roll.

Being dubbed at its onset as a "thinking man's" action film, Total Recall is right up there with Matrix and Inception as a high concept, big-budget film, that doesn't allow you to check your brain at the door. From the opening credits and score by Jerry Goldsmith you can already tell before the first scene pops up on the screen, you are in for one heck of a ride. Verhoeven and writers Philip K. Dick, Ronald Shusett (Alien), and Dan O'Bannon (Alien), do not give your ears or eyes a chance to react before attacking with the next bit of action. Even on your 5th or 10th viewing of the film, you will find dialog that you never heard before that might change your mind about what is really going on in the film, or about its very vague ending that leaves the viewer to make up its own mind on what they just saw on the screen.

Fleshing out the world of Total Recall is, of course, unmatched, action star of our lifetime, Arnold Schwarzenegger, as well as Rachel Ticotin (Con Air), Michael Ironside (Starship Troopers), Ronny Cox (Robocop), Mel Johnson Jr. (Star Trek: Deep Space Nine), and relative newcomer, Sharon Stone (Basic Instinct). All of them play their parts superbly, with some over the top action and dialog (as usually found in a Verhoeven film), and amazing detail to their characters. Even some of the mutants in Venusville while not having much speaking or screen time, have memorable moments, like the three-breasted woman (who was used as part of the marking material for the 2012 remake), and well as Thumbelina, the petite, yet hardcore prostitute/revolutionist).

Being a huge fan of the film, as well as, owning every iteration of it on home video (VHS, Laserdisc, DVD, Blu-ray, Digital HD). I could not wait to see how this brand-new transfer of one of my favorite films looked on 4K UHD, with Dolby Atmos, and new featurettes filmed specially for this release. As one can probably surmise from this review already. I was blown away in every shape and form by what I thought I would be getting from Lionsgate and StudioCanal. The 4K transfer, overseen by Verhoeven, is presented in its original aspect ratio of 1.85:1 (that nicely fills up the entirety of your 4K screen.) Presented on three-disc, the combo pack contains a 4K UHD copy of the film, a Blu-ray copy of the film, and a separate disc relegated to special features (some of which can also be found on earlier feature film discs as well). The picture itself is amazing, as Dolby Vision tones down some of the very bright spots found its last release in 2012 on Blu-ray entitled "The Mind-Bending Edition". It shows its true theatrical colors and saturations just as I saw it in the theater in 1990. The detail is very sharp, however, the one glaring issue for me is the gain. While this was filmed on 35mm cameras and is a real negative, it appeared that this also increased the grain in the 4k version, and it doesn't seem like enough DNR (digital noise reduction) filters were done to make this look "demo quality". While grain is an issue that is hotly contested (some like it, some don't) I fall in the "no grain" group because it did take me out of the film a few times while watching it. The audio, presented in a brand in Dolby Atmos track easily helps one to forget the grain issue with clear dialog, some height effects, and great track separation. I dare say I have never heard Total Recall this good (and this is after seeing it over 40 times in my life).

Not to be outdone by the audio and video presentation, this 30th Anniversary release of Total Recall has a plethora of Special Features. Some of them are from its old releases of the film, as well as brand new ones specifically made for this release. These features include: Audio Commentary with Arnold Schwarzenegger and Paul Verhoeven, Total Excess: How Carolco Changed Hollywood Featurette (a look at my favorite studio from the 80s and 90s). Open Your Mind - Scoring Total Recall (a look into the work of Jerry Goldsmith) Featurette, Dreamers Within the Dream: Developing Total Recall Featurette, the brand new theatrical 4K trailer, Total Recall: The Special Effects Featurette, a Making of Featurette, and "Imagining Total Recall" Featurette.

With Total Recall being one of my favorite films of all time, I was eagerly awaiting this release and counting down the days until it arrived for review. Aside from the DNR issue, I can say that this release does not disappoint and should be part of any Schwarzenegger, Verhoeven, or Total Recall fan's collection. Just remember for the memory of a lifetime...Call Rekall.