Home / Movie Database / Where The Wild Things Are Innovative director Spike Jonze collaborates with celebrated author Maurice Sendak to bring one of the most beloved books of all time to the big screen in "Where the Wild Things Are," a classic story about childhood and the places we go to figure out the world we live in. The film tells the story of Max, a rambunctious and sensitive boy who feels misunderstood at home and escapes to where the Wild Things are. Max lands on an island where he meets mysterious and strange creatures whose emotions are as wild and unpredictable as their actions. The Wild Things desperately long for a leader to guide them, just as Max longs for a kingdom to rule. When Max is crowned king, he promises to create a place where everyone will be happy. Max soon finds, though, that ruling his kingdom is not so easy and his relationships there prove to be more complicated than he originally thought.

Purchase DVD/Blu-ray/4K UHD physical copy of Where The Wild Things Are today at Amazon.com

Download Where The Wild Things Are in Digital HD/4K from the iTunes store.

Where The Wild Things Are images are © Warner Bros.. All Rights Reserved.


Apple Signs Deal with Maurice Sedak's Foundation for Multi Year ...  7/7/2020 4:53 PM EDT
Apple has teamed up with The Maurice Sendak Foundation for an overall streaming deal. The deal will include new shows and specials based on his works.The multi-year deal will be another addition to the children's programming already available on Apple TV+, including shows from Sesame Workshop, Peanuts, and The Jim Henson Company.1963's "Where the Wild Things Are" was Sendak's best-known book, spaw...  More>>

Where The Wild Things Are Theatrical Review 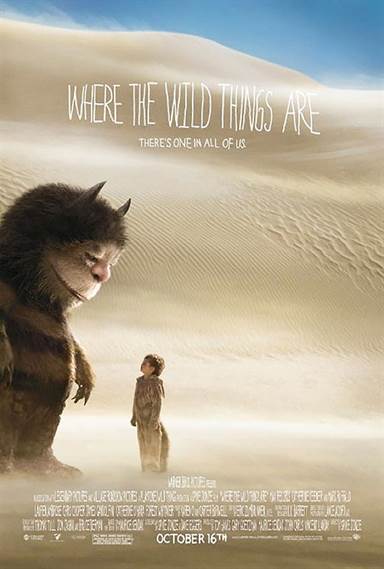 The 1963 book is 10 sentences long, and it is a classic.  The story is about the island where the child, Max, goes after being sent to bed without supper because he was out of control in the household that was originally populated with horses.  When the editor determined that author, Maurice Sendak, couldn't draw horses, she suggested monsters; and Maurice went back and created giant deformed things that were emotionally based on his extended family that had come around for family dinners.

It worked beautifully and has enthralled generations.  Making a movie out of it was a pretty tall order; the book is minimalist and (according to Sendak) dealing with a child's mastering (at least this once) of anger.  How would you do that in a movie?  While the plot arc includes transgression, regret, and forgiveness, it is so elemental that it doesn't have anything by way of back story.  It is merely a matter of filling in the gaps than dealing with a story that is one entire gap.

Spike Jonze is a good pick for being the guy to do it.  He and author David Eggers collaborated on the piece and came up with some filler that the still-living author felt was okay.  Mom is divorced.  Max (the title character, played by actor Max Records, after an extensive search) has an older sister who is not so interested in spending time with her somewhat angry younger brother.  Instead of being sent to bed without dinner, Max's tantrum is somewhat upgraded, and has him running out of the house in the middle of the night wearing his wolf costume.

After finding a boat and journeying to the Wild Things Island, he finds monstrous creatures that are by turns angry, scary, immature, and loving. Their tribe (which is also a family and various parts of Max's brain) is dysfunctional and unhappy; but Max, who declares himself their king, claims he can lead them.  They expect him to fix things.

It is here that the story becomes both complex, and paradoxically, paper-thin.  The Wild Things are echoes of the complex interrelations of Max's child-like understanding of person-to-person relationships and his own mind. They can be huge and cuddly (as seen in the previews), but can also be frightening, angry, and dangerous (the movie wisely avoids excesses, but there is an elemental sense of danger to the beasts that feels perfect).  The movie plays it scrupulously and breathtakingly straight with Max.

He does not develop wisdom beyond his years.  He doesn't rise to the responsibility of being king.  He does what he does and has no mature concept of "an exit plan".  What will the Wild Things do if his attempt at being King fails?  He has ideas, but while they are sometimes good ones, they do not always work out right.  The Wild Things are big, but not "grown up".   They have mature appetites (more so than Max), but lack any true adult perspective.  I think the closest they come is an analogue of his sister and maybe his fractured understanding of his mother; and I am really just guessing about what they were meant to represent.  They are a frightening cross between the power of an adult and the mentality of a child.

Here the movie both excels, and, to an extent, stalls.  If you find Max's excursion into a fantasy land that is masterfully-built fascinating, you may not care that it lacks focus and that the pacing is slow.  If you're looking for the big finish, the movie will drag. The Wild Things have serious and entangled interpersonal conflicts and if the viewer wants resolution they'll be disappointed.

I've read it was Being John Malkovitch that landed Jonze the job, and I think that must be true.  The level of sophistication in the construction of the characters is more than one level deep.  The movie wisely resists what must have been brutal pressure to deliver a Hollywood ending, and it feels all the more true for it.  Where the Wild Things Are is a movie befitting of its characters.  It is raw in some places.  It lacks focus in others.  Sometimes it is leading --when we see the wooden construct Carol, the Wild Thing, as built -- we know instantly what its fate will be because of an earlier point in the film, but often it is not.

I would hesitate to call it a truly daring picture, but it is certainly not a conventional child's movie.  When beloved books are made into films, there is the danger that they will be too literal -- this is not -- it is an extension of the original, but not a duplicate.  There is also the danger that they will simply be commercialized for a buck.  This is not; it may do well at the box office, but its PG rating alone indicates that it is not simply being pitched to the original's target market.

Where the Wild Things Are will need several years of hindsight to be judged on its merits.  Its visuals are impressive; the creatures are a combination of animatronics suits and CGI for the faces.  Its landscapes are real save for when they are not (CGI holes in trees blend seamlessly with the real, wild, Australian forest where it was filmed).  It is an exceptional work, and I think it will take some time to digest fully.