Jurassic World: Fallen Kingdom is a very bold film, that is the second best in the series. If you are a fan of the series or just really well-made films I highly suggest you pick up a copy of it on 4K UHD. To quote the infamous John  Hammond - “They spared no expense”. 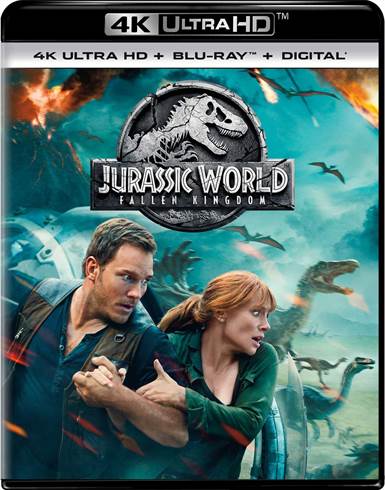 Last time we left our prehistoric creatures, the humans had fled Jurassic World leaving them to roam the island freely. Now, the dinosaurs are threatened by a once dormant volcano, causing a big rescue effort that includes Claire Dearing (Bryce Dallas Howard; Terminator: Salvation).  With the end seemly near again for the once extinct-now living creatures a call comes Claire's way from Benjamin Lockwood's assistant, Eli Mills (Rafe Spall; The Big Short) asking her for her assistance in a secret rescue effort. Now, Claire must do whatever she can in order to save these animals and calls upon Owen Grady (Chris Pratt; Guardians of The Galaxy) again to help her. After the rescue efforts are in place, Owen and Claire realize that the dinosaurs aren't being brought to a safe location to live but are being sold to continue more DNA experiments. Of course, once again the lesson of not tampering with mother nature is lost on some, causing chaos, however this time around with a more horrific results.

When Jurassic World director Colin Trevorrow (The Book of Henry) was tasked to bring back to life the world that Crichton and Spielberg created himself, he and producer Frank Marshall (Raiders of The Lost Ark) decided to not just go with one film and see how it would do, but created a three part trilogy from the onset. The second part was designed to start to take the franchise in new places and open its world instead of just doing a fifth rehash of humans and dinosaurs in an action/adventure on a remote island off the coast of Costa Rica. In this, Trevorrow entrusted director J.A. Bayona (A Monster Calls) to take the reins for this installment. What was created was simply movie magic. Part action, part horror Jurassic World: Fallen Kingdom takes the series to a place never seen before giving fans the eye candy they have come to expect, then turning the entire story on its head and changing everything you thought you knew.

All the right talent was involved in creating one of the best popcorn films of 2018. Howard and Pratt are terrific together. Their chemistry last time was amazing, however, they took it to new heights in Fallen Kingdom. The on-screen banter and stunts from these two make you hope they share a screen again sometime very soon.  Newcomers to the series Daniella Pineda (The Originals), Rafe Spall, Justice Smith (Paper Towns), and Isabella Sermon will make for an interesting third chapter as their characters were both interesting and make the viewer curious to find out more about them.

Jurassic World:Fallen Kingdom is presented in 2160p. The upscaled 4k resolution encoded with Dolby Vision makes the images that appear on screen lifelike. Thanks in part to J.A. Bayona instance of mixing practical putters and CGI effects, as well as the transfer — dinosaurs have never looked more convincing and real that they have with this home video release.  With an interesting mix of a DTS:X soundtrack on the 4k disc presentation and Dolby Atmos on the Digital HD 4k presentation Jurassic World: Fallen Kingdom sounds simply amazing. Dinosaurs roar around you as explosions jump off the screen. While the Digital HD Dolby Atmos soundtrack is amazing, the DTS:X soundtrack is just a tad better giving the viewer the feeling they are truly inside the film.

Special Features included with the 4K disc are the same as the Blu-ray. While most are very short in length the amount and quality of them make up for it. They are as follows:

While audiences gave a mixed reaction to the film at the box office (some didn't like the mixture of action and horror) Jurassic World: Fallen Kingdom is a very bold film, that is the second best in the series (nothing will probably ever beat the original 1993 film). What could have been a very risky move by going against typecasting in the 4th sequel, this film made it a success and has opened up the realm of Jurassic to more films to come hopefully after the 2021 final film in the trilogy.  If you are a fan of the series or just really well-made films I highly suggest you pick up a copy of it on 4K UHD. To quote the infamous John  Hammond — "They spared no expense".

For more information about Jurassic World: Fallen Kingdom visit the FlickDirect Movie Database. This release has been provided to FlickDirect for review purposes. For more reviews by Nathan M Rose please click here.