Pratt and Howard were terrific choices for the original reboot and they once again prove why they deserve to be in this blockbuster. 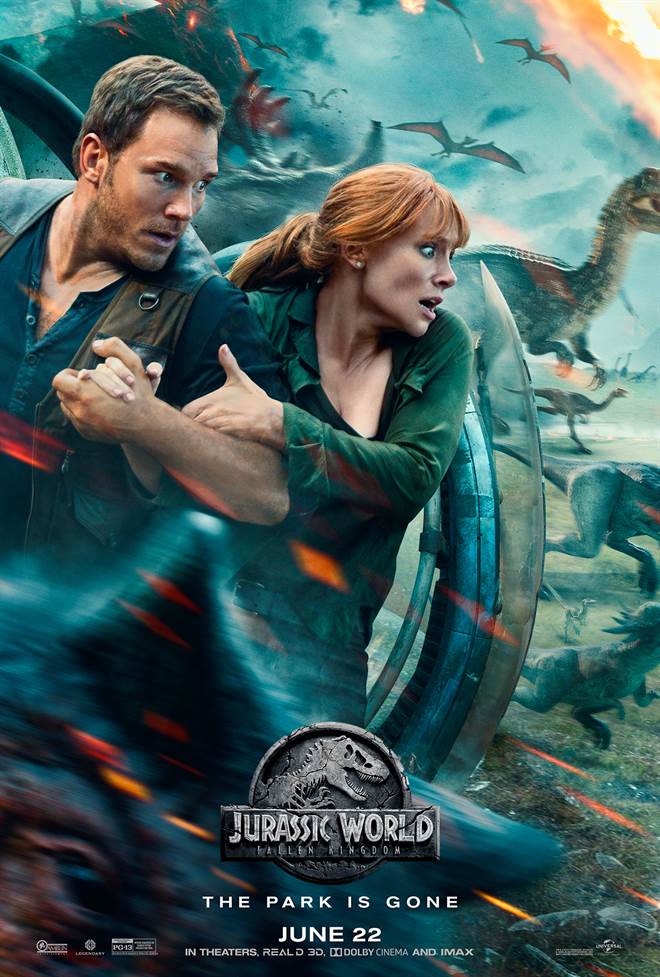 Purchase   DVD/Blu-ray/4K UHD
Twenty-five years ago we were taken to an Island and transported back in time to when dinosaurs roamed the earth.  Jurassic Park was an immediate box office hit which spawned two sequels.  In 2015 the series got a reboot when Jurassic World came to theaters and once again was a big hit.  Naturally the success of the film made it impossible to ignore and the powers that be at Universal Pictures green lit a second installment that opens this week.  Jurassic World: Fallen Kingdom once again reunites audiences with the amazing creatures we were awed by back in 1993.

As the film opens we see the once dormant Volcano on Isla Nublar beginning to spew lava.  People, including Claire Dearing (Bryce Dallas Howard; The Help), are scrambling to find a way to save the dinosaurs that will once again become extinct should the Volcano erupt.  When Congress declines to help it seemed all hope is lost until Benjamin Lockwood's (James Cromwell, L.A. Confidential) assistant, Eli Mills (Rafe Spall, The Big Short) calls Claire asking for her help in relocating the creatures.  Thankful that the animals will be saved Claire is willing to do almost anything including talking to her ex-boyfriend, Owen Grady (Chris Pratt; Guardians of the Galaxy).

However, once on the island, and Owen helps "capture" Blue, they realize things aren't exactly what they seem and Eli Mills isn't the altruistic soul he portrays.  Claire and Owen discover that these creatures aren't being relocated but sold to the highest bidder in order to fund more DNA experiments that would have dire consequences on a Global scale.  What could possibly go wrong?  Of course things end up out of control with deadly dinosaurs running wild and the bad guys getting what they deserve.  Meanwhile we also learn the backstory as to why Hammond and Lockwood parted ways years ago with a somewhat shocking result.

For those who were hoping for more of the same, this film has a different feel than its predecessors.  There is a darkness and a looming sadness that permeates the movie that the others didn't have.  While still somewhat scary (I admit I jumped a couple of times), this Jurassic seemed more sinister and a little devastating at times.  When we see the volcano erupt and watch as the dinosaurs left on the island perish in the lava there is a melancholy that descends 1) because this is the end of an era (Twenty-five years in the making) and 2) you can't help but feel for the dinosaurs that die since none of this was their choice in the first place.

Pratt and Howard were terrific choices for the original reboot and they once again prove why they deserve to be in this blockbuster.  Pratt infuses Owen with a sense of humor that comes in handy to break up some of the tension while his softer side comes through at just the right moments and to just the right degree.  Howard blends a toughness with a soft underbelly that makes her endearing while not portraying Claire as the "damsel in distress".  Newcomer Isabella Sermon does a good job for her first role as Lockwood's granddaughter, Maisie and the supporting cast is excellent.

Director J.A. Bayona (A Monster Calls) offers some interesting angles and beautiful panoramas which envelopes the audience in the vastness of Isla Nublar.  At times I felt the pacing was a little slow which didn't build suspense as much as it seemed to drag out the scene.  Veteran Composer Michael Giancchino's score (Up) unfortunately was distracting and more often than not took me out of the film rather than enhancing my experience.

While the ending leaves the door wide open for another movie in the franchise I'm not sure how many more times I can watch extinct creatures wreak havoc while humans try to capture them.  I was looking forward to this sequel but, while I didn't hate it, I didn't love it either.