Tarantino always offers something different anytime he has a film in theaters but when Pulp Fiction premiered in 1994 audiences knew it was something special. 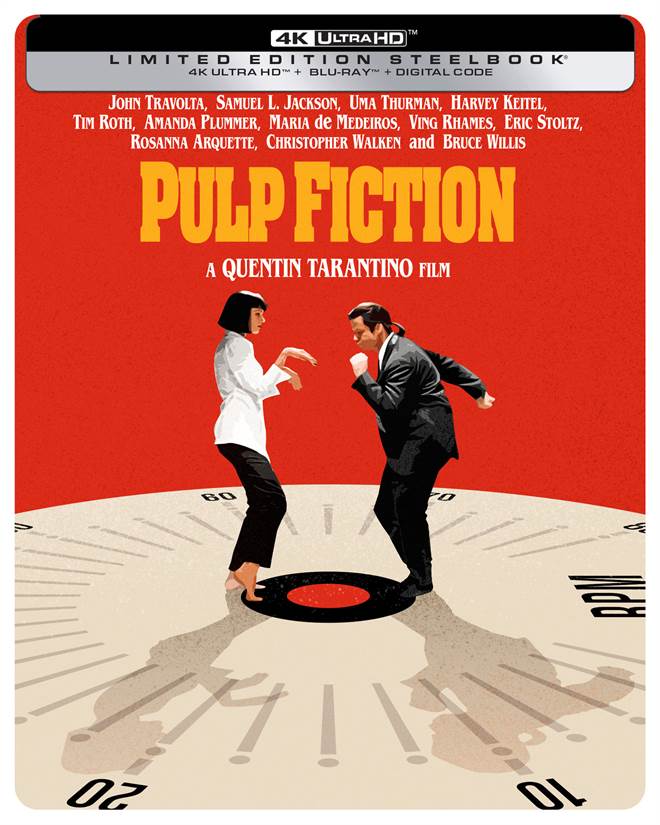 John Travolta made his acting debut when he was 16 years old. Five years later, he was starring in a hit television show, Welcome Back Kotter, and a few years after that he became a major movie star when he danced his way through Saturday Night Fever.  Over the next fifteen-plus years, his film projects were hit and miss, and his career seemed to be on a downslope.  Then in 1994 up and coming writer/director Quentin Tarantino cast Travolta in his latest movie Pulp Fiction and the rest, as they say, is history.  This month, just in time for gift giving, Paramount Pictures is releasing the movie in 4K and special steelbook packaging.

Here's the story...The film interweaves three tales, told in a circular, fractured manner, which only fully connects by the time the final credits roll. The first story focuses on Vincent Vega (John Travolta; Broken Arrow) and Jules Winnfield (Samuel L. Jackson; Kingsman: The Secret Service), two hit men on duty for "the big boss," Marsellus Wallace (Ving Rhames; Mission: Impossible franchise), whose gorgeous wife, Mia (Uma Thurman; Kill Bill: Vol. I & II), takes a liking to Vincent. In the second, a down-and-out pugilist (Bruce Willis; Die Hard), who is ordered to take a fall, decides that there's more money in doing the opposite. The final chapter follows a pair of lovers (Amanda Plummer; Ratched and Tim Roth; The Hateful Eight) as they prepare to hold up a dinner.

Many people feel Travolta's Vincent Vega was a comeback role having had several flops in the years prior. Teaming him with Jackson made for a dynamic pair as they play off of each other well.  Thurman had worked with Tarantino previously so one can only imagine he had her in mind when he co-wrote the script.  Willis, Rhames, and the rest of the cast do a great job creating these characters who, while not relatable to most people, make the audience invested in them.

Video and audio quality for home releases have come a long way since Pulp Fiction was first released on Blu-ray back in 2011.  The 4K upgrade is a vast improvement, at least where the technical aspects are concerned.  The 2160p resolution makes everything brighter and more detailed.  The picture quality looks sharp and clean.  Colors pop off the screen and make for a much more rich experience.

The DTS-HD Master Audio 5.1 is an improvement as well.  The music is vibrant and robust and ambient noises add layer upon layer of sound appearing from every direction.  Dialogue is clear and crisp and can be easily heard throughout the film.

While the extras are plentiful, they are the same that was previously released with the original Blu-ray eleven years ago. They are mostly housed on the Blu-ray and include:  Not the Usual Mindless Boring Getting to Know You Chit Chat, Here Are Some Facts on the Fiction, Pulp Fiction: The Facts, Deleted Scenes (including Quentin Tarantino Introduction), Behind the Scenes Montages (Jack Rabbit Slim's and Butch Hits Marsellus), Production Design Featurette, Siskel & Ebert At the Movies: The Tarantino Generation,  Independent Spirit Awards, Cannes Film Festival - Palme D'Or Acceptance Speech, Charlie Rose Show, Marketing Gallery (Theatrical Trailers, TV Spots, Pulp Fiction Posters, Academy Award Campaign and Trade Ads), Still Gallery, Enhanced Trivia Track, and Soundtrack Chapters.

Tarantino always offers something different anytime he has a film in theaters but when Pulp Fiction premiered in 1994 audiences knew it was something special.  Not only was it excellent storytelling, but it showcased Travolta in a whole new light. From the beginning it was destined to be a new "Classic" film and, in my opinion, it has.

With a bright eye-popping red, cover, the 4K steelbook will stand out on any shelf. The front and the back cover art is new and offers a little bit of fun and whimsy to this serious, heavy film. Heading to stores on December 6th, Pulp Fiction, especially the limited edition steelbook,  is a must-have for any movie fan.

For more information about Pulp Fiction visit the FlickDirect Movie Database. This release has been provided to FlickDirect for review purposes. For more reviews by Allison Rose please click here.