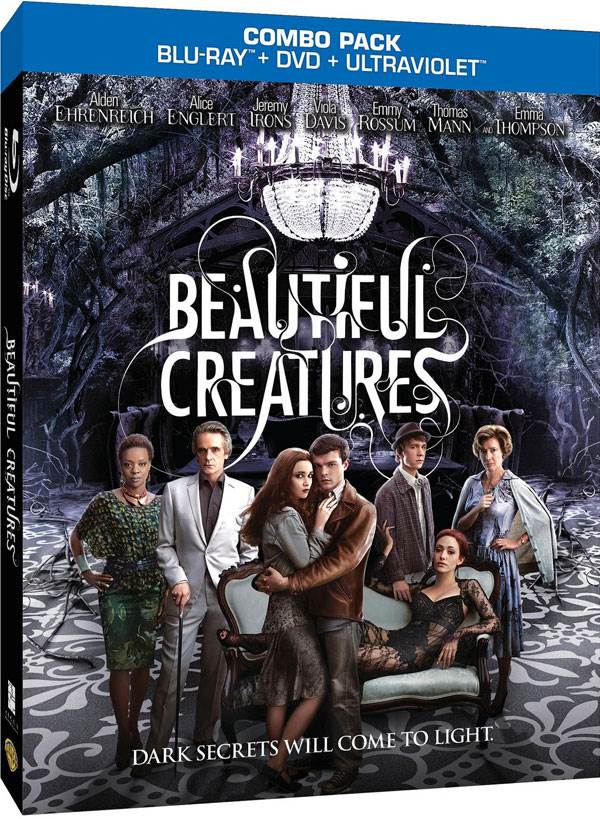 So it begins (and hopefully ends) the post Twilight era of hurried box office seizures, as studios and once-respectable filmmakers willingly sell their souls to score the next, big teen-driven supernatural mega-franchise. There's an Edward and Jacob-sized hole in adolescent cinema's still-racing heart, dear readers, and whoever manages to fill that hole will inherit a disturbingly literal fortune. Enter writer/director Richard LaGravenese's Beautiful Creatures, which might have been a contender... if, that is, it wasn't such an embarrassingly obvious grab at the Twilight coffers. With little to distinguish itself from the gathering genre crowd and even less to offer moviegoers looking for anything remotely fresh or unexpected, it flopped to the tune of $19 million in the States, $60 million worldwide. Hardly Stephenie Meyer numbers; hardly the series-generating cash cow Warner Bros. was looking for.

When young, lovelorn Ethan Lawson Wate (Alden Ehrenreich) saunters on screen, his slippery South Carolina drawwwwl as overripe as a sun-seared Georgia peach, it's all but inevitable that the gentlemanly teen dream will meet the love of his life within minutes. Sure enough, in glides Miss Lena Duchannes (Alice Englert), not only the girl of his dreams but the girl he keeps seeing in his dreams. Some of his more religious classmates aren't so happy to see her, and the vicious rumor being spread between fifth and sixth period is that the Duchannes family vacation at Lord Satan's summer cottage. Turns out the Salem Brigade is onto something, though. The Duchannes may not be witches, but they are "casters"... which are essentially witches, making the lengths to which they (and the filmmakers) go to re-brand their magical existence a rather odd exercise in PC hoop-jumping.

Casters are capable of creating illusions, enticing weak minds, shape-shifting, controlling the weather, spinning banquet tables at comical speeds, and other mystical, convenient-to-the-plot shenanigans, and, upon turning sixteen, either go "light" or "dark," the latter of which involves becoming evil incarnate. And guess who's about to celebrate her sweet sixteenth? Luckily for her, Ethan is determined to keep Lena on the side of the angels, which isn't made any easier by the arrival of Lena's mother, a powerful dark caster named Sarafine (Emma Thompson), and her sultry, nearly nude cousin, Ridley (Emmy Rossum), both of whom are up to no good. Can Ethan, Lena's uncle Macon (Jeremy Irons), and a caster bookkeeper (Viola Davis) prevent the poor girl from turning to the dark side? Do secrets buried since the Civil War hold the key to Ethan and Lena's future? Is there a way to break the curse that haunts the Duchannes ladies? Will Lena resist the Emperor and fight for the Republic or unleash her anger on Ethan in a fit of Force-wielding fury? The answers are as obvious as the film's clunky twists and turns are silly, and the teens' romance remains a snarky-turned-sappy fool's errand. Rest assured, love conquers all.

Need evidence that Beautiful Creatures is little more than thinly-veiled Twilight counter-programming? Look no further than comments straight from the mouths of Kami Garcia and Margaret Stohl, co-authors of the 2009 young adult novel of the same name: "The teens that we were writing for wanted to hear not only a boy's voice," as opposed to Bella's, "but they wanted the girl to be the powerful supernatural and the boy to be the mortal." That's right. Writing, not by meticulous design or inspiration, but by demographic mandate. Before LaGravenese's film adaptation was even a sparkle in Warner's eye, its story and characters were a product of assembly-line manufacturing and simple supply and demand calculation. It parts ways with Twilight on various occasions, of course, and LaGravenese (by way of Garcia and Stohl) goes out of his way to try and differentiate the two by the film's end. Unfortunately, no amount of personality quirks, briefly glimpsed magic, overacting or endgame re-shuffling is capable of hiding the fact that Creatures has Twilight's blood pumping through its veins.

If it wasn't so smolderingly serious, Beautiful Creatures might have even worked as a tongue-in-cheek riff on Twilight's pouty, sparkling vamp saga. Instead, it takes its built-in audience for granted, relies on teens and lovesick moms to accept its pillaging wholesale, and offers up an array of casters that fail to grab hold of the imagination or linger in the mind. Worse perhaps is that Creatures isn't unwatchable. Thompson, Irons, and Rossum (who has shockingly few minutes of screentime) are clearly having a lot of blast, and there's a warm slice of fun available to anyone hungry for the actors' supernaturally charged Southern Gothic shtick. Ehrenreich does his best with an aw-shucks charm that would be right at home in Mayberry, and Englert summons enough angst and anxiety to keep the drama alive. But the romantic leads lack that certain, indelible spark and rarely if ever, upstage their more theatrical co-stars or salvage the plodding, predictable script. Not that a sudden influx of chemistry would suddenly amount to movie magic. Too many fundamental problems debuff Beautiful Creatures' every spell and make it increasingly difficult to fall in love with anything other than the end credits.

Beautiful Creatures staggers between its dark, moon-cast nights and hot, twice-baked days with an unexpectedly inconsistent 1080p/AVC-encoded video presentation. The DTS-HD Master Audio 5.1 surround track doesn't have enough opportunities to conjure any real magic, but its strong support of the film lends power and presence where they might otherwise be none. As far as special features, we have:

Beautiful Creatures pines for Twilight glory but comes up short, delivering a deformed clone with more superpowers but less heart or appeal. And considering the Twilight series had its own share of debilitating issues, Creatures is something of a mess, over-sold, overacted and overwhelmingly dull. Warner's Blu-ray release is a bit more satisfying, but it struggles with consistency with a decent but problematic video presentation, a solid DTS-HD Master Audio 5.1 surround track and a dead-end supplemental package. All more than adequate, if that is you enjoy Beautiful Creatures. If not, nothing else on the disc will make the film any more palatable.

For more information about Beautiful Creatures visit the FlickDirect Movie Database. This release has been provided to FlickDirect for review purposes. For more reviews by Chris Rebholz please click here.