There is so much The Martian does right it’s no wonder it is a possible Oscar contender. 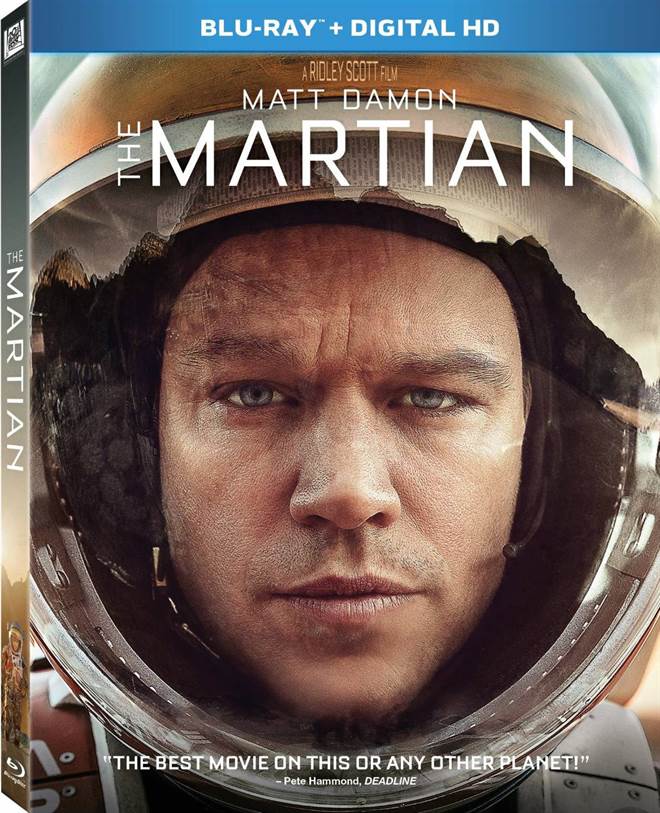 Purchase   DVD/Blu-ray/4K UHD
The year is 2035, and the Ares 3 mission on Mars has gone horribly wrong.  The crew has to abandon the planet or risk their own lives when an unexpected storm threatens them.  Unfortunately, as they make their way to their ship, one of their own team is impaled by an antennae and Captain Melissa Lewis (Jessica Chastain; The Help, Interstellar) must make the split second decision to leave his body behind.

Fast forward 24 hours and Botanist/ Mechanical Engineer Mark Watney (Matt Damon; Bourne Ultimatum) wakes up alone and injured on Mars.  Realizing he has been abandoned, he must figure out a way to survive on an uninhabitable planet with no real hope of survival or rescue.  Thus, is the plot of novel turned major motion picture, The Martian.

There is so much this movie does right it's no wonder it is a possible Oscar contender. Damon does a good job in his role as a scientist stuck on an unforgiving planet, alternating between humor and minor moments of despair as he realizes how hopeless his situation is.  While I know there are other actors out there who could possibly could have done more, there are definitely a lot of others who would have brought less to the role.  Damon was a solid choice to play Watney, and he delivered.

Director Ridley Scott (Prometheus) also gets a thumbs up from me as he sets a tone of a sense of hope from the film in what is, clearly, a slim chance.  His sweeping shots of the planet and universe make the audience realize how small we are, while at the same time bringing us intimately close to Watney and his immediate world.  Scott keeps the pace of the film moving and the story flowing throughout in what could have been a tedious mash up of technical and scientific jargon.

As with most Blu-ray's today, the 1080p High Definition video quality is excellent and the various hues of Mars come through in perfect color.  The Dark black of deep space is also a highlight as the Hermes hurdles back to Mars to save Watney.  The lossless DTS-HD Master Audio 7.1 is clear and sharp and makes you feel not only the bass during the few explosions that occur in the film, but also the vast silence that permeates Watney's world.  It also helps to enhance an eclectic soundtrack that will appeal to some, while adding comic relief for others.

This release is full of extras and some of them are really terrific.  Sadly, the gag reel is lacking, but Occupy Mars: The Casting and Costumes feature is great and the two faux documentaries are thoroughly entertaining.  The first, Ares III: Refocused interviews the players involved with Watney's rescue and the second, Ares: Our Greatest Adventure is hosted by Neil de Grasse Tyson and looks at the Mars space program.  The producers really thought about the Blu-ray release and the extras and gave the audience some worthwhile viewing.

The Martian is entertaining, well-acted (for the most part), and offers some suspense.  And even though there is an air of "anything that can go wrong, will go wrong", it doesn't detract from the overall sense of good, old-fashioned story telling.

For more information about The Martian visit the FlickDirect Movie Database. This release has been provided to FlickDirect for review purposes. For more reviews by Allison Rose please click here.

Paul Kates
The bottom line is The Martian is a hugely entertaining movie and although it has a running time of 141 minutes it really does not seem that long when you are immersed in it.
Full Review | Grade: B

Allison Rose
The real gem of the latest (The Martian) Blu-ray edition comes in the extras. The added feature is a Q&A with NASA scientists, Writer Andy Weir, Director Ridley Scott, and various other members of the space exploration community, including Bill Nye.
Full Review | Grade: A