With over 14 hours of extras, Lionsgate spared no expense on the extra in this set. There is something new for everyone, even for the most knowledgeable fan. 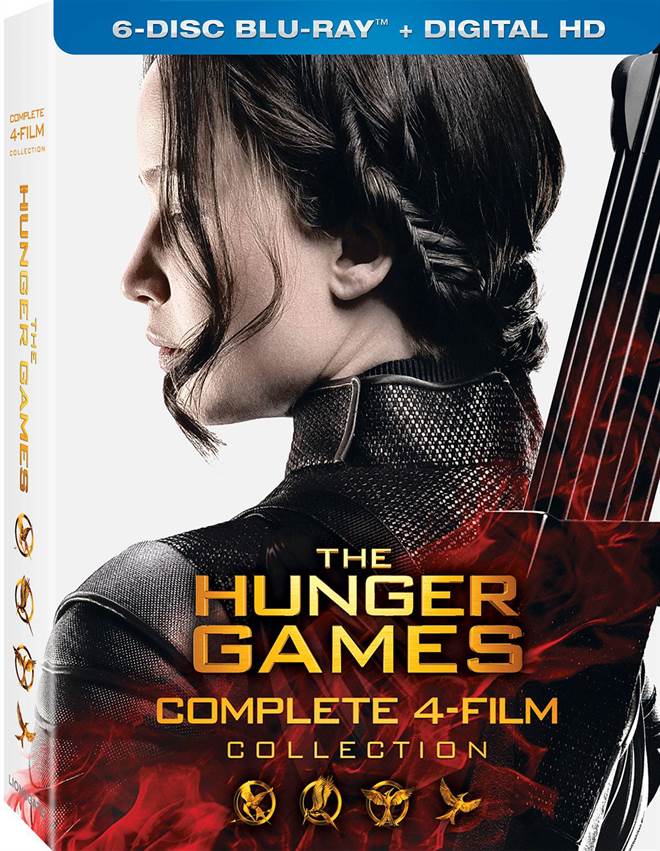 Purchase   DVD/Blu-ray/4K UHD
With the home release of Hunger Games: Mockingjay Part 2, the circle is complete and the film series based on the novels  by Suzanne Collins is over. While Lionsgate turns it's sights to try to start up other franchises in it's wake, it also has released the four- film series in a box set for the fans.

For those uninformed, The Hunger Games series is the story of the world of Panem and the uprising of it's districts against the capital and President Snow (Donald Sutherland;Horrible Bosses). Katniss Everdeen (Jennifer Lawrence; X-Men: Days of Future Past),  unknowingly becomes the symbol of the uprising and leads the people to strike back at the empire. A reluctant Katniss unites the masses and urges them on to victory, but with unintended consequences and heavy loss of innocent lives.

In The Hunger Games: Mockingjay, Part 2, the final film of the Hunger Games franchise, we see Katniss Everdeen, Peeta Mellark (Josh Hutcherson; Red Dawn), Gale Hawthorne (Liam Hemsworth; Independence Day: Resurgence) and Finnick Odair (Sam Claflin; The Huntsman: Winter's War) join forces once again and, this time, they have their sights set on the Capitol and President Snow.  The team suffers losses, and while they do achieve victory, it has come with a heavy cost. We also see Katniss deal with a war of her own - struggling with her beliefs.

The Hunger games series, while an interesting trilogy of books, suffers a similar fate of so many adaptations in that it grows old and tired by the end and the fourth film doesn't hold the same interest as the first and second ones did.  To be honest, Catching Fire, the second book and film , was the best of the bunch.  The final two films lost some of the excitement and drive, and, by this last one, the energy was mediocre at best.

The new film in the series, The Hunger Games: Mockingjay Part 2 is released in 1080p AVC codec. With most of the film having a very dark tone, it does not display well on the screen, and while there is no artifacting or noise, it is difficult at times to see what is going on the screen. The other three films use the same transfer they did with their individual releases and while The Hunger Games: Mockingjay Part 1 has the best transfer of the set, all of them are pretty decent.

Continuing it's commitment to bring the best quality possible to it's releases, The Hunger Games: Mockingjay Part 2 is released in Dolby Atmos. Just like with with the video content, the three previous films use the audio mix they were originally released with. (Hunger Games/ Catching Fire, DTS-HD Losses Audio 7.1; Mockingjay Part 1, Dolby Atmos).

With over 14 hours of extras, Lionsgate spared no expense on the extra in this set. There is something new for everyone, even for the most knowledgeable fan. Surprisingly, these extras only include the first three films leaving  The Hunger Games: Mockingjay Part 2 special features to it's own individual release. The special features a digital HD copy of all for films as well as:

While the Hunger Games series started with such great promise and excitement it is depressing to see that that excitement didn't carry over for the final two films. Is it possibly because they split the final book into two pieces? One may never know. That withstanding, the series is beloved and has a large fan base. This release should hold them over until the entire set is later released in 4k UHD.

For more information about The Hunger Games: Mockingjay, Part 2 visit the FlickDirect Movie Database. This release has been provided to FlickDirect for review purposes. For more reviews by Nathan M Rose please click here.