Question: What do you get when you put Streep and Tom Hanks together with Director Steven Spielberg? Answer: A movie making a “dream team” of course. 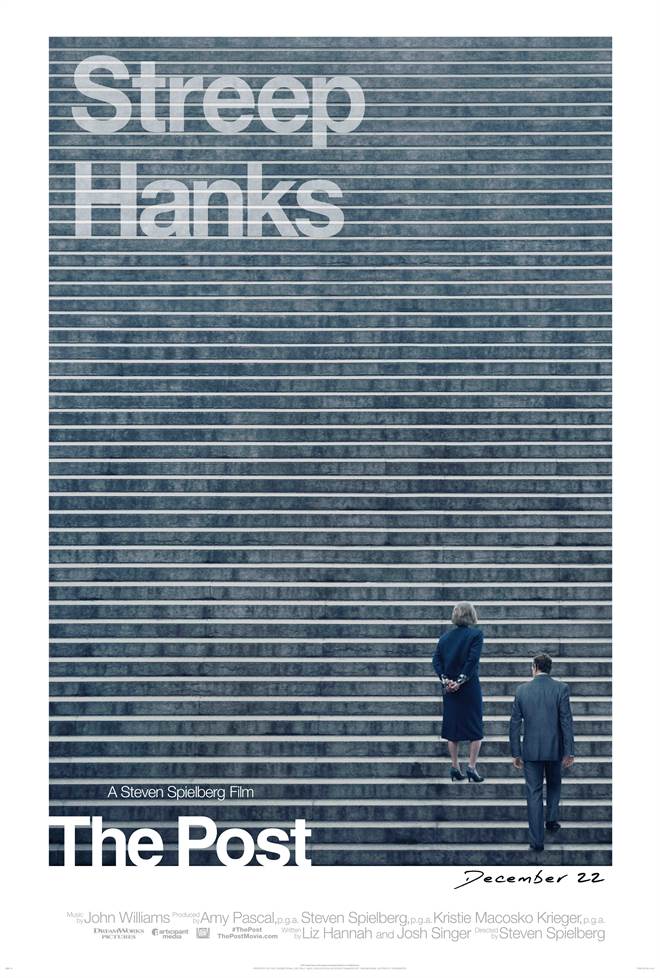 Purchase   DVD/Blu-ray/4K UHD
The Washington Post was pretty much a local paper until it blew the roof off the White House when it reported on the Watergate scandal in 1973.  However, it also made a name for itself as an investigative journalistic newspaper a few years earlier when it followed up on a New York Times story about the Vietnam War and published part of a government report about the analysis of the war.  This daring bit of journalism landed both the Times and the Post in court and solidified them as leaders on the news front.  It also threw a spotlight on the country's first female newspaper publisher, Kay Graham (Meryl Streep; The Devil Wears Prada).  This true story is the basis of The Post, coming to theaters in limited release later this month.

In the early 1970's, the New York Times seemed to have a big story on their hands and the Washington Post suddenly found themselves scrambling to find out what it was and beat the Times to the punch.   They did not but when the story of the government cover-up of the cost of the Vietnam War broke, it became one of the biggest news stories of the decade.  A report of over 10,000 pages and spanning four United States Presidents showed we were not only losing the war but that we sacrificed a multitude of young lives simply to "save face".  While this was information the American people deserved to know, the President obviously wanted it squashed, citing "National Security" and, in turn, took the New York Times to court, preventing them from printing any more information and sending a warning to any other newspaper.

When the Washington Post received portions of the same report, Kay had a tough decision to make – post their story and possibly suffer the same repercussions as the Times or keep quiet and 1) let the Times trump them again and 2) let the government dictate the news.  She ultimately published and found the Post being dragged into court along with the Times in a fight for freedom of speech/freedom of the press.  The outcomes were that the Times and Post won, other papers printed parts of the report in solidarity, and the Post was banned from Nixon's White House.  Of course, it was only a few years later that the Post took down the President with the aforementioned Watergate Scandal.

Question: What do you get when you put Streep and Tom Hanks (Forrest Gump) together with Director Steven Spielberg (E.T.: The Extra-Terrestrial)? Answer: A movie making a "dream team" of course.  I'm not sure why someone didn't just pull out an Oscar and hand it over to them.  They are the top tier in a competitive filmmaking industry and even their worst films are better than many other directors' and stars'.  Streep does use a familiar hand gesture we have seen from her before in The Devil Wears Prada and Bridges of Madison County (to name a few of her films) where she puts her hand over her mouth in contemplation which can sometimes be distracting.  Besides these heavy hitters, the supporting cast including Bradley Whitford (Get Out), Sarah Paulson (American Horror Story)  and Bob Odenkirk (Breaking Bad) are all seasoned professionals who do a great job alongside these Oscar winners.

While not as intriguing or captivating as All The President's Men, The Post still offers some gripping drama, as well as pointed commentary on the current state of the political climate in this country which I'm sure, was part of Spielberg's point in making this film.  Regardless, it is a classic newspaper story (which was fun to watch with all the printing presses of yesteryear) with a strong message and a fabulous cast.  Some are calling it the best film of 2017, which I don't necessarily agree with, but I will admit it is certainly among the top ones for the year.

For more information about The Post visit the FlickDirect Movie Database. For more reviews by Allison Rose please click here.

The Post images are © 20th Century Fox. All Rights Reserved.

Judith Raymer
The Post is a movie you’ll want a physical copy of whether at home, in the classroom, or even (especially) the boardroom!
Full Review | Grade: A