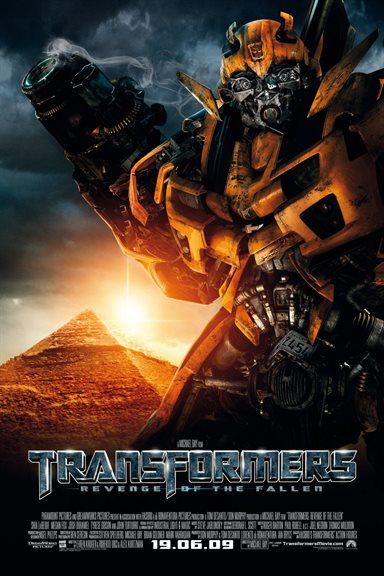 Purchase   DVD/Blu-ray/4K UHD
This is one of the hard movies to review, because I could give this movie an F and if you are a fan of the first movie, you're probably going to go see it in the theater anyway. While I did enjoy the movie, from a overall movie perspective the movie doesn't quite cut it.
Set two years after the events of the first movie, we see Sam Witwicky (Shia LaBeouf) heading off to college (Note: the grounds of the college look awfully like the grounds of the college where Professor Jones taught in Indiana Jones 4, also starring Shia LaBeouf, and in fact I'll mention Indiana Jones again later). Apparently the events of the first movie have been shushed enough in ordinary life that Sam is able to lead a semi-normal life, even though he has a 2010 Camaro that can turn into a two story tall robot (Bumblebee, who lost the voice he found at the end of the first movie.) Unfortunately freshmen at his college aren't allowed to have cars, so Sam must say goodbye to Bumblebee.
At the same time, the other Autobots have teamed up with elite human soldiers from around the globe and created an international fighting force dedicated to fighting the Decepticons whenever they show up on Earth. (this reminded me too much of Tom Clancy's Rainbow Six, or even Hasbro's other potential franchise, G.I. Joe, which opens in 6 weeks. More on this general subject later) Josh Duhamel and Tyrese Gibson reprise their roles as Captain/Major Lennox and Sergeant Epps respectively as senior members of secret group known as NEST.
The movie goes downhill from there. Yes, there are lots of special effects, but nothing we haven't seen before. While the first movie focused a lot on the transforming effect, with one notable exception, the robots transform quickly, and at times the effects are so dizzying you can lose your breath at times, but then you've also lost track of what is happening and where everyone is. The exception is the new "effect" for this movie, where a group of Transformers merge into one larger Transformer. Unfortunately, this is just a rehash of shows like the Mighty Morphin Power Ranges, or old school like Voltron or dare I say, the original Transformers cartoon. (Don't worry, Omega Supreme doesn't appear in this movie)
Once the basic plot is established, the movie takes off like a supercharged Camaro and doesn't let go...of the action. But you can forget plot development of any character. Too many new Transformers are introduced, and even most of the old ones aren't discussed much. Two of the new Autobots have an apparent "urban" mannerism, and are both voiced by Tom Kenny (Spongebob Squarepants), who did an excellent job with the voice work. But, the dialogue is at times like nails on a chalkboard.
Unfortunately this isn't the worst of it. The movie borrows from so many other movies I lost track of them. From Transformers that can look like humans (Terminator), or be little metal balls that can combine into one robot (Terminator 2), robots that develop attitudes and lame attempts of humor (Short Circuit 1 and 2), to aliens that want our planet for the natural resources (Independence Day) or that aliens built the pyramids (Stargate). The movie takes place all over the world, from California to the National Air and Space Museum's Steven F. Udvar-Hazy Center (the movie doesn't mention the full name it however, and the Enola Gay makes a cameo appearance) to Jordan and Egypt. At one point they visit Petra, which apparently doesn't house the Holy Grail (Indiana Jones and the Last Crusade, the second Indiana Jones reference of this review) but rather was built by aliens. And speaking of aliens, we also have autowriting as well as alien technology imprinting data directly into a human's brain: (Indiana Jones 4, but it does make sense when compared to the first Transformers movie) this movie came awfully close to nuking the Mountain Dew vending machine. Lastly there is one scene that extremely resembles a portion of the Bioncle mythos created by the Lego Group. It's like watching a clip show of all these other movies, but with heart-pounding action and almost non-stop explosions.
The movie also makes a few jabs, some of which I believe were intentional, and others that are not. From nerds having secret rooms in their mother's basement, reliance on too much technology, to the probable policy of the current administration of attempting to negotiate with terrorists and acquiesce to their demands rather than fighting (which would have dire consequences in terms of the story of the movie), these kinds of little humorous interludes do not add to the film. John Turturro, who is reprising his role as former Agent Simmons of Sector 7, is the primary protagonist of most of the humor in this movie. He delivers his lines well, but that isn't enough to save the movie from the horrible dialogue. Nor could Rainn Wilson's small role help. Even Deep Roy's brief cameo appearance was underutilized, especially the interaction between him and John Turturro; it was marred by the humor delivered by a little "pet" Transformer for what could have been a decent scene.
In the end, while it's nice to see the United States military showing off modern or next generation weapons (think of the gun from Eraser, and look it up on Google.), this kind of film is what it is: a popcorn summer action adventure, with no plot or character development. The story follows a straight line, and even the ending could be figured out halfway through the movie.   If you're on the fence, I'd probably wait for the Blu-Ray.
(Did you notice I didn't mention anything about Megan Fox? It's because she wasn't needed for the story. And we know why she's there.)

Purchase a DVD/Blu-ray/4K UHD physical copy of Transformers: Revenge of the Fallen today at Amazon.com

Download Transformers: Revenge of the Fallen in Digital HD/4K from the iTunes store.

For more information about Transformers: Revenge of the Fallen visit the FlickDirect Movie Database.

Read More Reviews For Transformers: Revenge of the Fallen