While Contagion is an amazing film, it is certainly not for everyone....the psychological factor of this "near-to-life" film could cause some people to be afraid to walk outside. 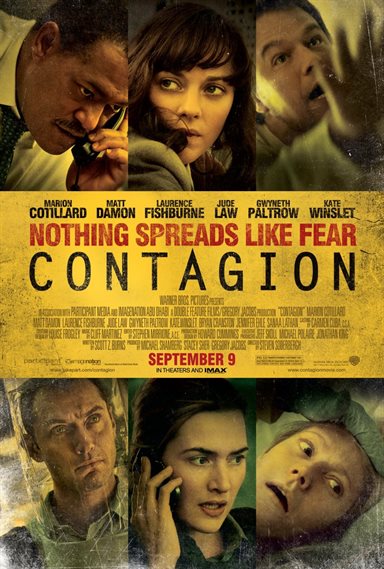 Purchase  DVD/Blu-ray/4K UHD
Throughout human history, there have been a few Pandemics that have plagued mankind.  There was the Black Plague, the Spanish Flu, SARS, and Bird Flu to name a few; but what happens when the next Pandemic hits.  How far and quickly will it spread with our global economy? Warner Bros along with Director, Steven Soderbergh (Traffic, Oceans Eleven), tries to answer these questions with their new film, Contagion.
If you can imagine a women (Gwyneth Paltrow, Iron Man) gets on a plane with a flu, then imagine every surface she might touch while she is on the plane, each person who breathes in the same air she does, and then imagine when she arrives home and sees her husband (Matt Damon, The Bourne Identity), and child… and so on and so on.  This is how Soderbergh gets Contagion off to a very quick and an "all-to-real" to-life-start by using his quick, stylized directing and quick cuts to help to convey just how fast a path this microscopic killer can infiltrate modern society.
After the initial attack by the pandemic, Contagion quickly switches modes to focus on how this worldwide crisis affects various people across the globe -- including a group of administrators and scientists from the Center For Disease Control (Laurence Fishburne --The Matrix; Kate Winslet – Titanic; Jennifer Ehle -- Pride and Glory), a Worldwide Health Organization investigator (Marion Cotillard, Inception), an overzealous blogger (Jude Law, Sherlock Holmes), and a Chinese official (Chin Han, The Dark Knight).  The star-studded cast is simply amazing and gives some of their best performances of their respective careers.
While this type of storytelling is extremely difficult to pull off, Soderbergh is a veteran with these large landscape films and easily moves the story and cast along with the finesse you have come to expect from him through the years.  It takes quite a lot these days to fully engage an audience throughout an entire film; however, Contagion accomplishes this task where the entire audience of the film was so gripped by the story that an explosion could have happened in the theater, and no one would notice.
While Contagion is an amazing film, it is certainly not for everyone.  While the film might only have a PG-13 rating, the psychological factor of this "near-to-life" film could cause some people to be afraid to walk outside just as Jaws made people afraid to enter the water after seeing it in theaters.

Download Contagion in Digital HD/4K from the iTunes store.

For more information about Contagion visit the FlickDirect Movie Database.