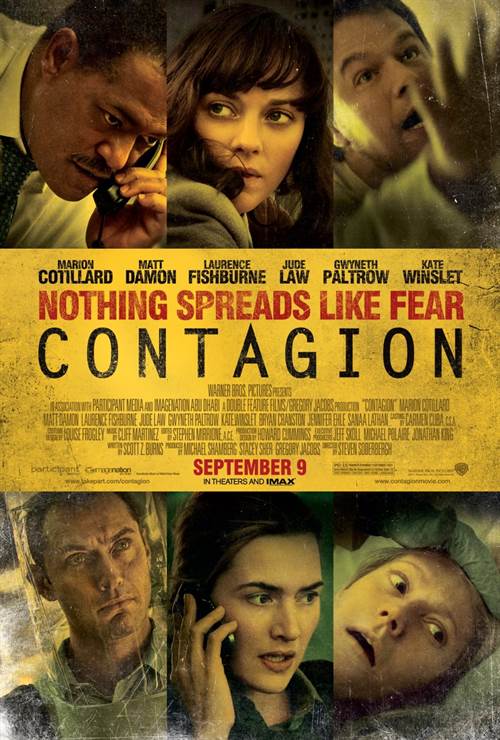 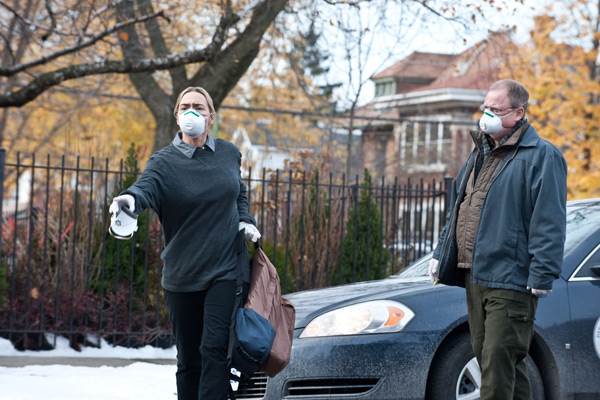 When Beth Emhoff (Gwyneth Paltrow) returns to Minnesota from a Hong Kong business trip, she attributes the malaise she feels to jet lag. However, two days later, Beth is dead, and doctors tell her shocked husband (Matt Damon) that they have no idea what killed her. Soon, many others start to exhibit the same symptoms, and a global pandemic explodes. Doctors try to contain the lethal microbe, but society begins to collapse as a blogger (Jude Law) fans the flames of paranoia.

Stream Contagion in Digital HD/4K from the AppleTV store. 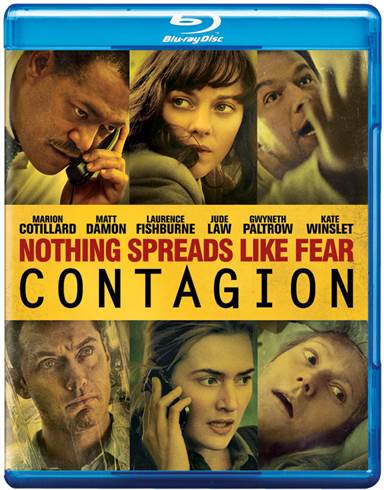 Contagion, the latest from director Steven Soderbergh, really got under this reviewer's skin, and quite frankly that's what makes it such fun.

Contagion is a lithe procedural that follows a deadly virus from patient zero through to epidemic and then containment. The whole chain of germs starts with Gwyneth Paltrow in Hong Kong and spreads out from there--London, Japan, Chicago. People start dropping dead, more get sick. Matt Damon was married to Gwyneth and he is immune, but he's losing his mind, scared his daughter will die, too. Laurence Fishburne is a big wheel at the Center for Disease Control, and he dispatches Kate Winslet to Gwyneth's home to follow up on all leads while the World Health Organization sends Marion Cotillard to Hong Kong to search for the origin of the deadly biology. Meanwhile, Jude Law is a conspiracy-minded blogger in San Francisco convinced the cure already exists and that interested parties are sitting on it in order to best capitalize on the tragedy.

All of these actors play characters with actual names, but you'll remember them easier by their civilian identities. Contagion is a fast-moving science thriller with a huge cast. (Other actors who appear but haven't been named consist of: Elliott Gould, Demetri Martin, John Hawkes, Enrico Colantoni, Bryan Cranston.) The script by Scott Z. Burns (The Informant!) covers a lot of ground very quickly, spanning the globe while mainly taking place between Thanksgiving and Christmas. In certain corners, government people rush to identify the source of the virus and discover a cure, and in others, characters go on about their lives trying to cope with this public crisis. Despite a distinct lack of hysterics or melodrama, Burns and Soderbergh still find time for the human moments between all the medical lingo. Damon provides a real emotional center, but there are also nice moments between Fishburne and Winslet, and Cotillard's subplot takes some unexpected turns.

In fact, there is a lot that is unexpected about Contagion. It's one of those movies that had a trailer that inspires you to feel as though they show you everything in 2 minutes. To be quite plain: you have not seen it all, you do not know everywhere Contagion is going. The people making the movie are smarter than you, they do things we could never dream of. Be aware, however, Contagion is not as zippy as the preview would have you believe. It is thoroughly enthralling and unnerving, but it's not the nail-biter they are selling it as. See it anyway. Just make sure you're awake and ready to pay attention.

There isn't much to tear apart here. Contagion is effective and efficient. It does what it sets out to do. It's a movie where a problem is posed, and then people put their heads together and work to fix it. Every exploitable narrative tributary is explored, examining all possible actions and reactions from the ground up. It's damn fine filmmaking.
Now on Blu-ray you can enjoy this gripping drama at your leisure. The film looks beautiful on screen with a score that keeps up with the pace of the film and played through surround sound speakers, really brings you into the movie. There aren't too many special features to speak of, 3 to be exact, the first a short on the reality of global viruses, an interview with some scientists and how they helped the actors prepare and finally a "what if" short asking what would happen if a global virus actually broke out.

So if you're looking for a smart well-paced film with an engaging story and  quality acting you should definitely check out Contagion.