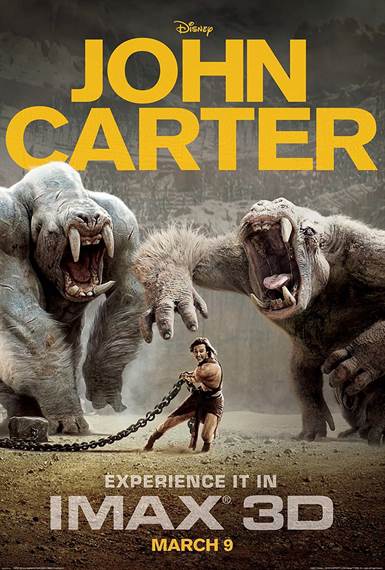 Purchase   DVD/Blu-ray/4K UHD
Technically John Carter shines as one of the better films I've seen in a couple of years.  The CGI, make-up, puppetry, mixed with fine live action characterization alone is worth the watch. Melding all this technology with the amazing fantasy story by Edgar Rice Burroughs and you have an excellent movie going experience. Much like the film Avatar you don't have to be a science fiction enthusiast to enjoy the adventure and fantasy.

The story centers on John Carter (Taylor Kitsch), a Civil War military captain who upon fleeing the possibility of death from his fellow soldiers lead by Powell (Brian Cranston) becomes cornered in a cavern, finds and amulet and gets transported to Mars.  Now in a strange world filled with aliens and having obtained physical superpowers due to the change in gravity John is perplexed.  After befriending the green skinned Tars Tarkas (Willem Dafoe) leader of the Tharks he meets Princess Dejah Thoris (Lynn Collins) of Helium and becomes her ally in the war against Sab Than (Dominic West).

The action filled transformation from gritty gunslinger to Martian power figure involves an exciting chase, capture by the four-armed Tharks and introduction to a planet in chaos.  Director Andrew Stanton of PIXAR (Finding Nemo, WALL-E) keeps the film moving at a fast clip slowing down only to add character buildup and relationships.  His team, most of which are from PIXAR and experts in the area of computer generation imaging, add the cool background, inhabitants and war scenes.

Taylor Kitsch (Friday Night Lights) gives first-rate performance as the buffed-out powerhouse John Carter who finds his way into the heart of Princess Dejah Thoris played nicely by Lynn Collins (X-Men: First Class).  The two have a lot of chemistry with their interplanetary love affair and make a hot couple on the screen.  Think Han Solo and Princess Leia (Star Wars IV) or Jack Sully and Neytiri (Avatar) both couples finding each other on distant planets caught up in a life of turmoil.

The players in this film are found in the top echelon of acting including Willem Dafoe (The Green Goblin in Spider-Man) who plays Tars Tarkas.  He's a strong willed ruler who has come under attack by the sinister shape shifting Matai Shang played by Mark Strong (Sinestro in The Green Lantern).  One of Tarkas' people Sola played by Samantha Morton (Control) leads Carter to the sacred Gates of Iss. Heading up the troop of Confederates who try to take Carter down is Bryan Cranston (Breaking Bad) as Powell.


The imagination runs high in John Carter with special aircraft that glides with bird feather wings.  Vast colonies move along the surface of Mars on a platform village that walks and crushes towns in its path.  A menagerie of creatures inhabit Mars including a worm faced organism that emulates a pet dog, huge dinosaur like animals that transport the Tarks into battle and a powerful white furred Yeti like creature that Carter has to fight and man other computerized action figures.

It's hard to believe that the high-energy science fiction book by Edgar Rice Burroughs (Norman Bean) was written back in 1914. But his talent for writing was so cleaver that his public relished not only in the John Carter series but the nearly 70 novels with imaginary tales likes Tarzan (series), The Lost Continent, The Deputy Sheriff of Comanche County, and The Land That Time Forgot.

John Carter has been rated PG-13 by the MPAA for intense sequences of violence and action, much like many of the Teen rated X-BOX games that are on the market.

Download John Carter in Digital HD/4K from the iTunes store.