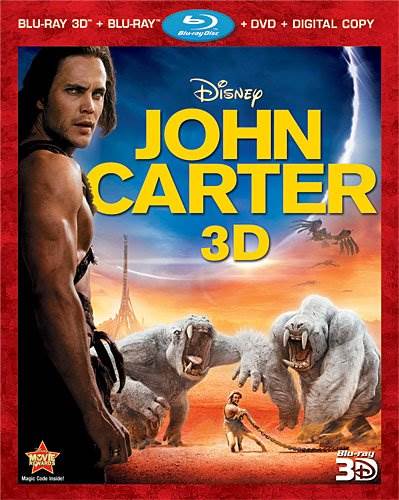 Purchase   DVD/Blu-ray/4K UHD
With occasional exceptions, like Michael Keaton's Batman, we want and expect our superheroes to be classically handsome. But the interplanetary sci-fi bash John Carter proves it's possible for a superhero to be incredibly good-looking…in the wrong way. Taylor Kitsch, who stars as the space warrior created a hundred years ago by Edgar Rice Burroughs, has soft bedroom eyes, a pinup's pout, and straight long hair that makes him look like an easy-listening star from 1974. On Friday Night Lights, Kitsch had a pleasingly direct, loose-limbed charisma, but within the stoic, arid, and often wordless fantasy universe of John Carter, he's clad in a breastplate and loincloth, and he comes off more like the Abercrombie & Fitch model he once was. Kitsch looks marvelous, but that's the problem: He looks a little too marvelous. He's all sexed up with little to do.

None of this is really the actor's fault. As a character, John Carter has appeared in countless iterations over the past century (novels and serials; comics from DC, Marvel, and Dark Horse; and graphic novels like The League of Extraordinary Gentlemen). His fusion of valor and mystic ability casts a shadow over the whole superhero genre — and also movies like Star Wars. Yet when seen through the lens of all that has come afterward, what was once original and visionary just routine. A hero of the Virginia Confederate Army teleported through space and time, futuristic combat on Mars! Seems old hat. John Carter, a $250 million spectacle based on the very first Carter novel, marks the live-action directorial debut of Andrew Stanton, one of the wizards of Pixar (he directed WALL•E and Finding Nemo). But Stanton's visual brilliance, as well as his storytelling wit, gets lost amid all the blah hardware and monochromatic dust. There is hardly a moment in John Carter that isn't stamped by the generic spirit of franchise filmmaking.

A lengthy prologue, set in New York and Arizona in the mid-1800s, has a deadliness about it. Then Carter is transported to Barsoom (Burroughs' fictional name for Mars). He wakes up in a desert that looks like a bombed-out Monument Valley and soon discovers his one effective superpower: With the gravity so much less forceful than it is on Earth, he can take flying leaps, like a long jumper. This must have seemed pretty damn exciting in 1912. Now, frankly, it's more than a little dorky. Carter's ability to bound has a ''Weee, this is fun!" quality.

Carter doesn't know that he's left Earth until set upon by the Tharks, a tribe of übertall green warriors who look like skeletal versions of E.T., with twin sets of arms and horns jutting out of their cheeks. They're cool to look at, for about five minutes, but though played via motion capture by Willem Dafoe, Thomas Haden Church, and Samantha Morton, they're less differentiated from each other than, say, the Na'vi of Avatar, and their scenes grow dull.

There are also humans on Mars, but the moment we meet them, we too seem to have been transported — to a bad sci-fi movie from the '50s. Ciarán Hinds, in the kind of thatchy wig no actor can triumph over, sulks and frets as Tardos Mors, leader of the red-tattooed Heliumites, and Lynn Collins, as his princess daughter Dejah Thoris, bats her eyes at the camera like a Gossip Girl version of Elizabeth Taylor in Cleopatra. Meanwhile, Dominic West smirks as Sab Than, leader of the dastardly Zodangans. He's Carter's rival for Dejah's affections, but it's a Flash Gordon love triangle, cheesy and predictable.

Out now on Blu-ray with a 3D option for certain packages, there isn't too much to get excited about. Besides some standard behind the scenes footage, a commentary and some deleted scenes, there isn't anything that makes the movie more interesting by learning some back story. The unnecessary 3D really makes the world feel false and alienating by emphasizing the synthetic, computerization.

Nothing in John Carter really works, since everything in the movie has been done so many times before, and so much better.
Cast:
Directed By:
MPAA Rating: PG-13

For more information about John Carter visit the FlickDirect Movie Database. This release has been provided to FlickDirect for review purposes. For more reviews by Chris Rebholz please click here.